Coming from humble beginnings as a staple food of Asian cuisine, steamed and fried dumplings have made their entrance to the homes of people around the globe.

Whether you like your food crispy or soft, this Asian food serves as an appetizer or a side dish while working perfectly as a main dish too.

So let’s see, steamed vs fried dumplings, which one should you choose. Whichever you choose, I promise it will not leave you indifferent.

Steamed vs fried dumplings is the only doubt you should have. In this article I will explain everything about these two most popular types of Chinese dumplings such as their differences and similarities, and I will answer the most common questions you might have about them.

Steamed Vs Fried Dumplings: Get To Know Them 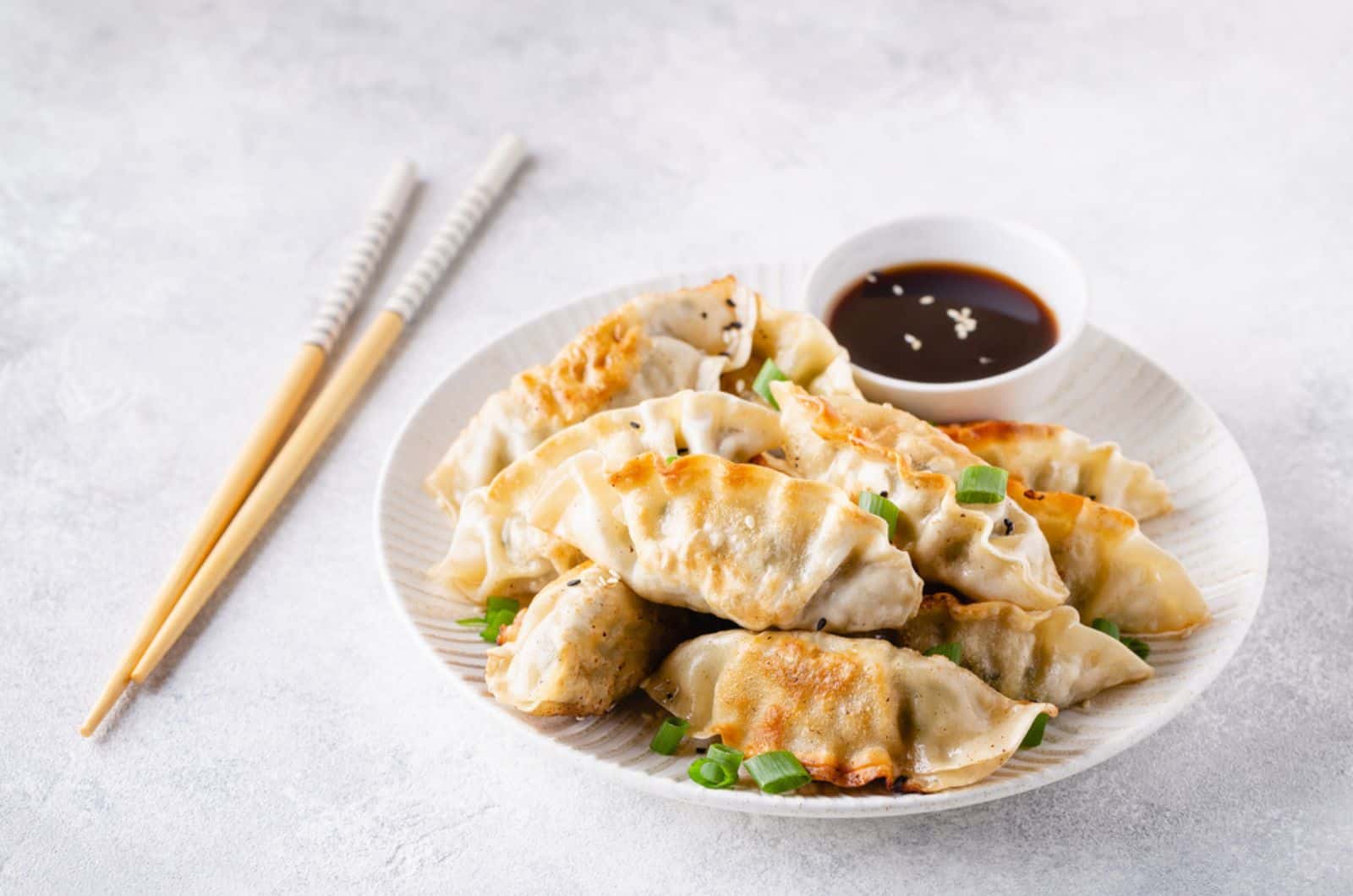 Before we explain the difference let’s get to know this yummy food first.

If you are a fan of Asian cuisine, dumplings are the food you should at least try and give them a taste test.

Simply said, dumplings are a kind of Asian food which consists of dumpling filling wrapped up in a piece of dough (wrapper). Dumplings are usually small, but their size can be adjusted according to your personal preferences.

Their texture and taste can differ depending on the chosen cooking method.

After being made, they can be served in a variety of ways:

• with a dipping sauce (usually made from sesame oil, soy sauce, black vinegar, and a few other ingredients),

• in broth, like a wonton soup, making them soup dumplings,

• on top of a wok stir-fry and many other ways or as far as your food imagination goes.

Steamed Or Fried: There Are 3 Differences! 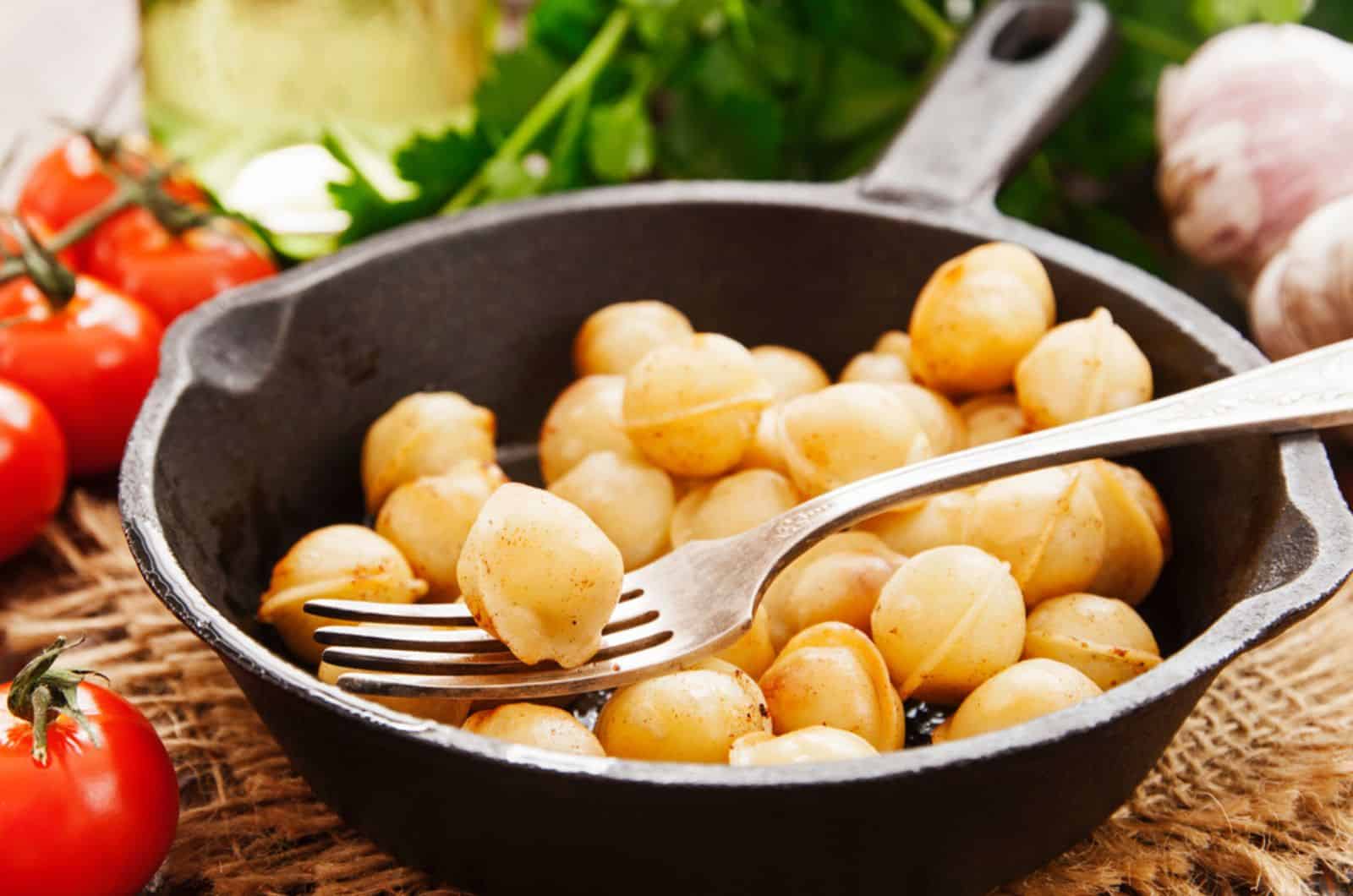 Even if they come from the same family, these two types of dumplings have their differences as their characteristics vary in a few ways. Check out my list of 3 key factors that determine the difference between steamed and fried dumplings.

Steamed dumplings are cooked by steaming. This can be done in a traditional Chinese bamboo steamer or any kind of a steamer you may have on hand. Steamed dumplings made this way are called Xiao Long Bao.

If you don’t have a bamboo steamer, you can use a pot of boiling water to cook them. Dumplings made by boiling in a pot are known as Shui Jiao among connoisseurs of Asian cuisine.

Fried dumplings can be deep-fried or pan fried. Deep-fried dumplings are made by simply putting oil in a frying pan and setting it on high heat for about 5 minutes.

Then you put the dumplings in the frying pan. Oil should cover most of the dumplings while deep frying them. Fry them until their bottom starts to brown.

Gyoza is a Japanese term for pan-fried dumplings (known as Jiaozi in Chinese cuisine) and they are made similarly to their deep-fried cousins but with significantly less oil. This is how you can do it.

First, put less than a tablespoon of oil in a nonstick pan. This should be just enough to cover the bottom of a frying pan. When the oil is heated, put the dumplings in the pan.

Texture is the first thing you will notice if you decide to try both steamed dumplings and fried dumplings.

Steamed dumplings are typical Asian dumplings and they have a recognizable smooth texture. They are chewy on the outside and soft on the inside.

They also tend to be much mushier than fried dumplings as they were made by steaming.

Fried dumplings will make your day if you are a fan of crunchy bites. With their crispy exterior and juicy interior, your time spent eating them will feel like a treat to your palate.

Now here comes the difference that is of great importance to all of us. Taste is why we’re here, isn’t it? How the dumplings taste will greatly depend on the dumpling filling you decide to fill it with. But, taste also depends on the cooking method you opt for.

Many would agree that deep-fried dumplings have the best taste due to the high amount of carbs and fat content in them.

Admirers of traditional Asian cuisine would probably dispute this as their traditional way of preparing food shows a clear preference to steamed dumplings. 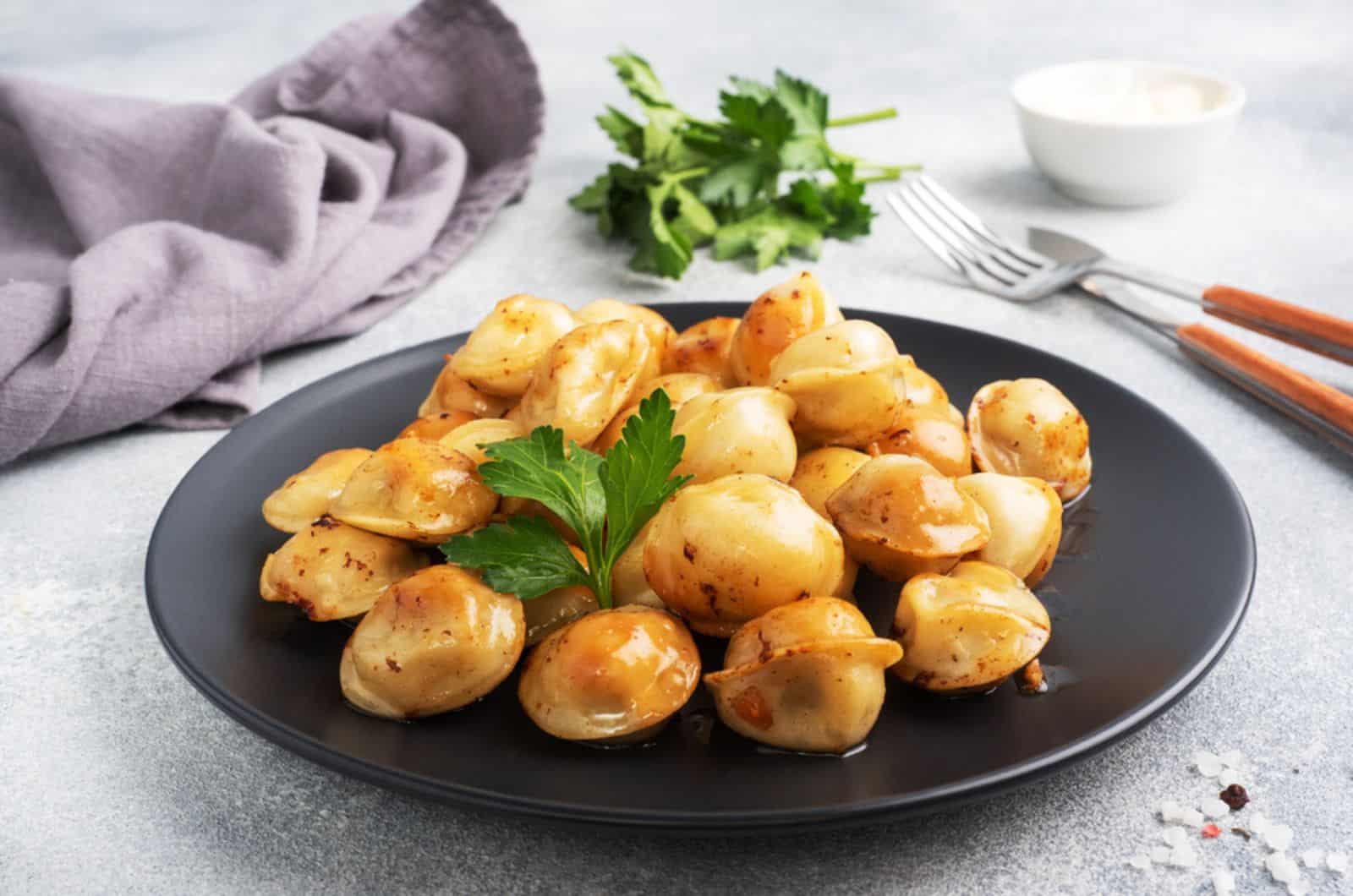 Now, that I’ve given you a few main differences between steamed vs fried dumplings, I want to remind you that they have many similarities as well. They are still family, right?

Here are their main similarities.

1.They Look The Same Before Cooking

This is because they are assembled in the same way. A dumpling filling is put in a wrapper (dough) and wrapped. Then it is closed firmly from the sides to prevent the dumpling filling from leaving the wrapper.

Dumplings have the same white color before they are cooked. Their shape is also quite similar, but this can be changed as everyone adjusts the shape according to their own personal preferences.

2. Dumpling Filling Is The Same

To make the dumpling filling, start by mixing some cut scallion or other leafy veggies with ground pork or beef in a big bowl. Add soy sauce, some sugar and ginger, vegetable oil, and a cup of water to even it out. Mix everything well with chopsticks or you can just use your hands.

Now you can pour the mixture into a preheated non-stick frying pan (or into a wok) and cook for five minutes. There you go! You are all ready for assembling your dumplings into a tasty treat!

While the filling is usually made with finely chopped or ground pork, you can make a vegetarian option too. To do this, just omit the meat and leave tasty veggies.

Dumplings can also be made with shrimps as the main ingredient. This kind of dumpling is called Har Gow or Dim Sum.

3. Wrapper Is The Same

The wrapper looks the same for both steamed and fried dumplings because it is made in the same way.

To make the dumpling wrapper mix flour and water in a bowl until dough starts to form. Then, take the dough out of the bowl and knead it into a small and smooth ball.

After this, put it back into the bowl and cover it with a clean cooking cloth or a towel (a silicone lid will do the job too). Leave it to rest at room temperature for about 20 to 40 minutes – the longer the better.

Then, take small pieces of dough and make a small ball that you will flatten between the palms of your both hands.

And that’s it you have your wrapper ready to be filled with some delicious dumpling filling.

Are Dumplings Better Steamed Or Fried?

Steamed dumplings are a healthier option. They also tend to keep their shape, so if you like your food presentable at the table you may want to choose steamed dumplings for your meal.

Compared to deep-fried dumplings which have a higher fat content, pan-fried dumplings make for a healthier choice. This is because they are fried with significantly less oil and their cooking process includes water.

When you have to make a choice between fried vs steamed dumplings make sure to choose in accordance with your own food preferences.

Pot-stickers got their name because they tend to stick to the pot as they are cooked. They are called “Guo Tie” in Mandarin.

Guo Tie dumplings are made with a thinner wrapper, which is why they tend to stick a bit to the bottom of the pan.

A pot is more often the utensil of choice for making a pot-sticker just as the name implies. They are also fried for a shorter amount of time than any fried dumplings and then water is added to cook them all the way.

Are Chinese Dumplings And Wontons The Same Thing? 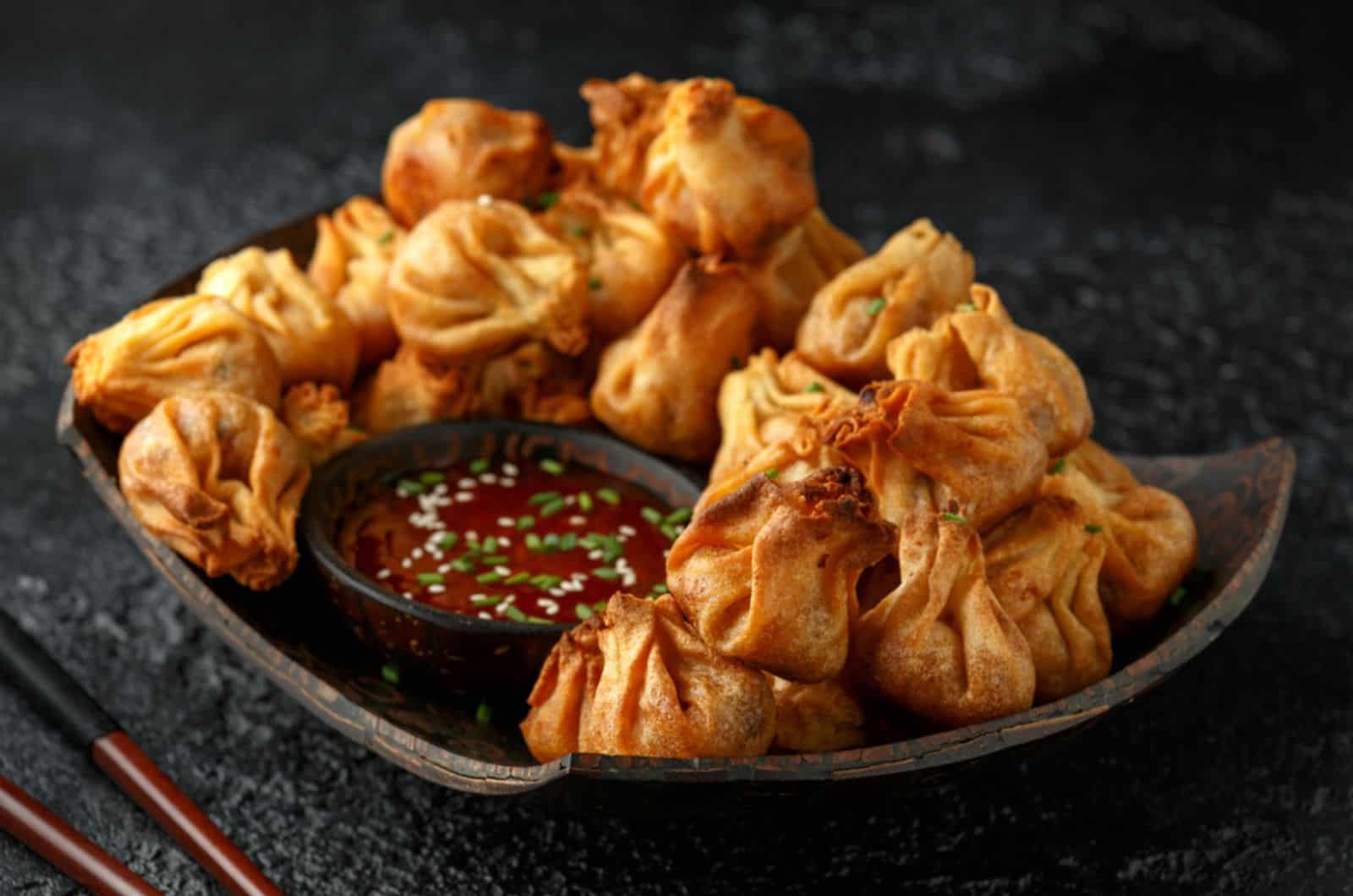 Wonton is a variation of Chinese dumpling and there is a difference between typical Chinese dumplings and wontons. Wonton has a square-shaped wrapper while the dumpling is always wrapped in a round dough.

The dough’s thickness also makes a difference between the two. Wonton wrappers are thinner and will stick faster to the bottom of the utensil when cooked.

Can I Make Pot-stickers In An Air-fryer?

Yes, you can. The best way to make pot-stickers really quick is by air-frying them. Just spread the frozen pot-stickers evenly in the air-fryer basket and cook them for 7 to 9 minutes. You will need to turn them around to make sure they cook evenly.

Pot-stickers are a popular freezer good in markets around the world. This is because frozen dumplings are a quick and easy meal option when you lack the time to make them from scratch.

You can easily make batches of dumplings and store them in the freezer for future consumption.

Steam It Or Fry It? It’s Time To Eat!

So, steamed vs fried dumplings? Have you made your choice? In this article you could find out everything about the differences and similarities of both.

Whether you like a crunchy bite or a soft, heart-warming piece of freshness, you will be sure to savor these flavorsome bites. The choice is all yours so make sure you enjoy it.