Contents show
1 Enchilada Vs Burrito: Their Main Differences
1.1 1. Appearance
1.2 2. Texture
1.3 3. Taste
1.4 4. Fillings
1.5 5. Differences In The Way Of Eating
2 Introducing Chimichanga Into The Equation
3 What Is The Difference Between A Fajita And An Enchilada?
4 Is Enchilada The Same As Wet Burrito?
5 The Bottom Line

When talking about Tex-Mex and Mexican cuisine, it is almost impossible not to mention burritos and enchilada. That is because these Mexican dishes are an essential part of Mexican cuisine.

But many people – even those more familiar with Mexican food – often confuse the two terms. The main reason for this is their similar ingredients or, more precisely, the burrito fillings and enchilada fillings are very similar. But the way of preparing them is somewhat different.

In the continuation of this enchilada vs burrito comparison, I will try to explain to you, in the simplest of terms, what are enchiladas and burritos and what are their main differences.

Enchilada Vs Burrito: Their Main Differences 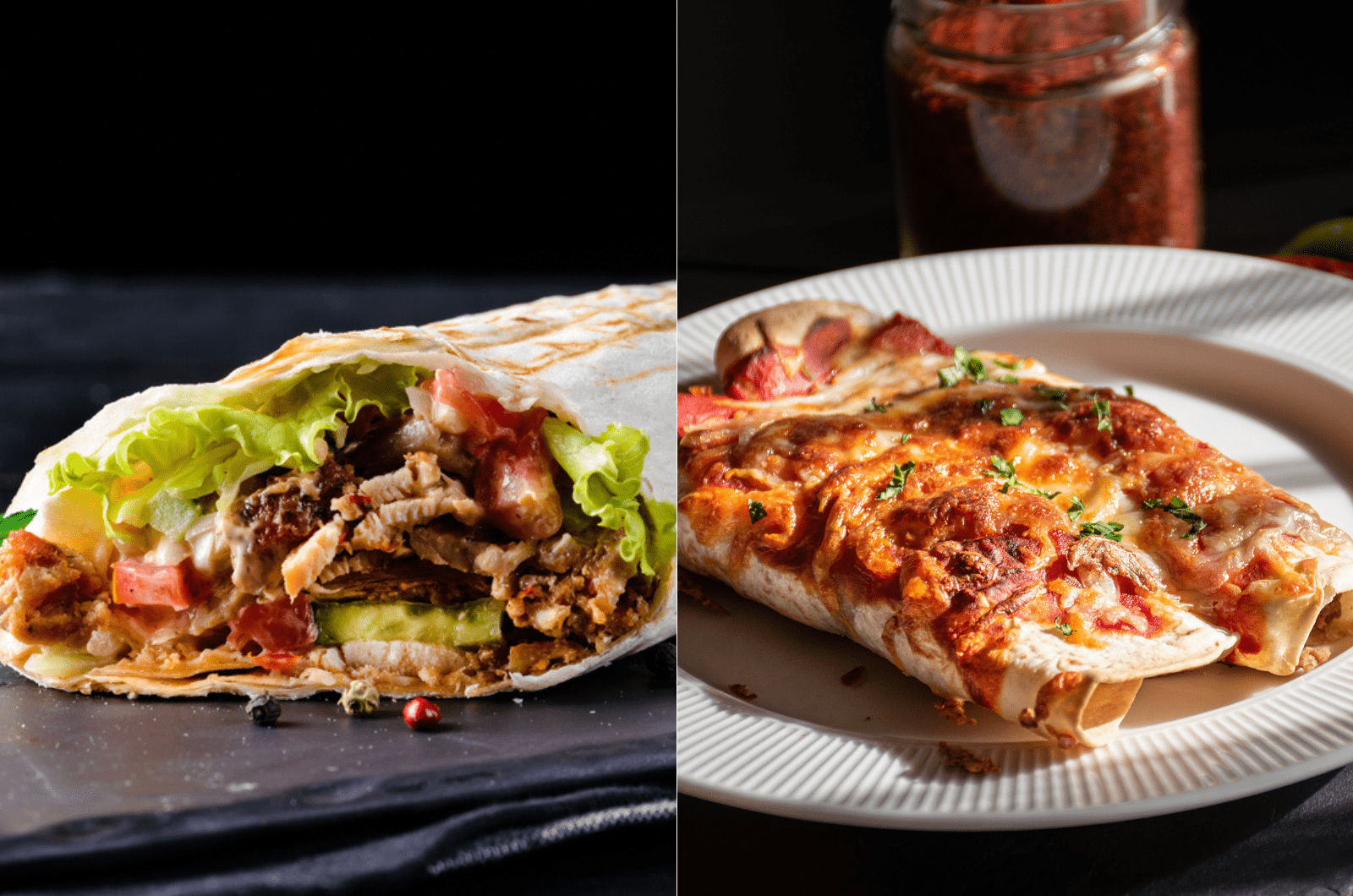 To better understand the very nature of these two Mexican dishes in the enchilada vs burrito comparison, as well as the main characteristics that connect and separate them, I will present them to you in the simplest possible way through 5 main categories.

It is logical to start an enchilada vs burrito comparison with the appearance of the two dishes because that is what you will first notice after all.

First, enchiladas look yellowish or white from the outside. They have garnishes and dressings. They are rolled-up soft corn tortillas that can be stuffed with cheese, chicken, or beef and covered in chili sauce or in salsa. There is often melted cheese on the top, which gives them that specific yellowish appearance.

On the other hand, the burrito is a large flour tortilla that can have a variety of fillings with ingredients that include cheese, meat, sour cream, cilantro sauce, beans, guacamole, and veggies. The composition makes it wet and soggy.

As I already said, an enchilada comprises a tortilla that is wrapped around a savory filling and covered with some enchilada sauce. It must be cooked by baking and the well-cooked enchilada must have a crispy texture.

If it is not cooked correctly, it will be a bit soggy, and that is something that you definitely do not want at all.

On the other hand, a burrito’s desired texture is a soft and pliable one. It is good that the filling is moist for the most part, but that depends on the type of burrito recipe, more precisely on the filling that you choose, whether it includes beans or meat. 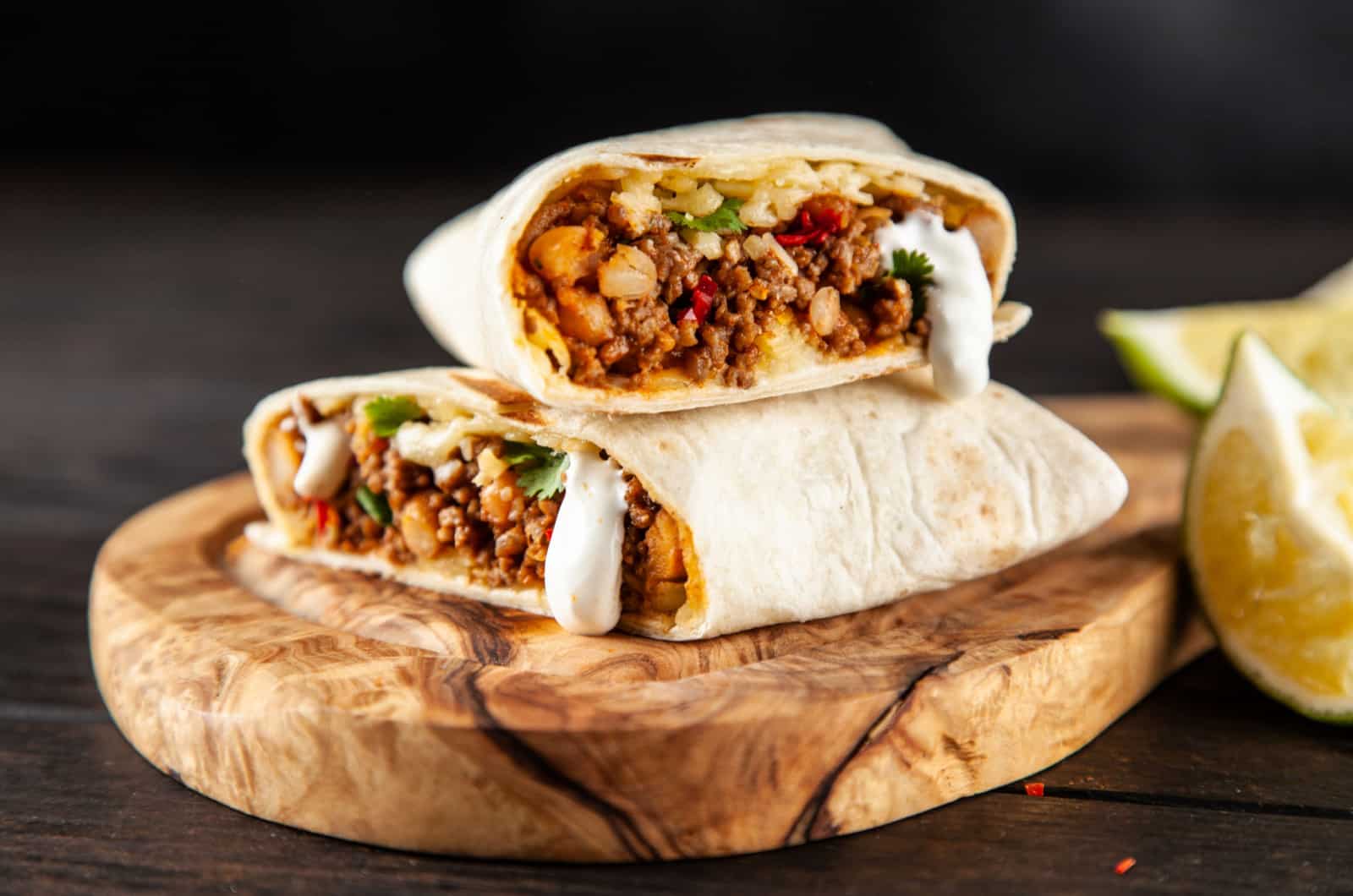 The taste of enchiladas are based on the sauce used in the recipe. Enchilada sauce has many variants like chili-based, moles, tomatillo-based, salsa verde, chile con queso, and Salsa Roja.

But the sauce is often a blend of tomato paste that has a rich umami flavor and dried spices. There are often two main types of enchilada sauce and those are red and green sauces.

The taste of a Mexican burrito is based on the filler because what you put in your burrito will determine the taste as well. So, if you want your burritos to be as sweet as possible, put more beans in them. If you like them spicier, put some hot sauce on them to level up the heat.

Both of these spicy dishes that come from Mexico have fillings, but the key difference is in the variety of fillings. The filling is especially important when it comes to enchiladas. Enchiladas are most often filled with meat and, for example, chicken enchiladas will only contain chicken meat in the tortilla.

When it comes to meat, they can also be filled with ground beef or pork. Aside from the meat, some other ingredients that can make up an enchilada filling are refried beans, veggies, and a few other ingredients.

Since enchilada literally means “to season with chili” in Spanish, it is logical that it is a good idea to spice it with some chili.

Burritos, on the other hand, can have various types of fillings. Those burrito fillings can include ingredients such as sour cream, meat, beans, rice, veggies, pico de Gallo, guacamole, or salsa.

Here in the US, the San Francisco-style burrito is very popular and it can be filled with ingredients like rice, sour cream, guacamole, whole beans, meat, cheese, lettuce, or salsa. A good example is burritos served by the national chain Chipotle.

I will also mention the very popular breakfast burrito and – with that – conclude the story about the types of burritos.

5. Differences In The Way Of Eating

If you find yourself in a Mexican restaurant, it is a good thing that you know some eating etiquette. This may not initially sound like a serious issue in the enchilada vs burrito debate, but it is very important in the case of these two Mexican dishes.

First, you eat a burrito with your hands because it is dry and because of the tortilla wrapped tightly around the filling. So, you can use your hands without hesitation, because there is no danger of getting greasy.

It’s a different story with enchiladas. It is not a good idea to eat them with your hands, but rather by using a knife and fork. The reason for this is the open edges of the tortilla, which creates a high possibility of different sauces leaking out while you try to bite into your delicious tortilla.

In addition, enchiladas are traditionally covered with a lot of sauce, so that also represents an obstacle to eating them with your hands.

Introducing Chimichanga Into The Equation 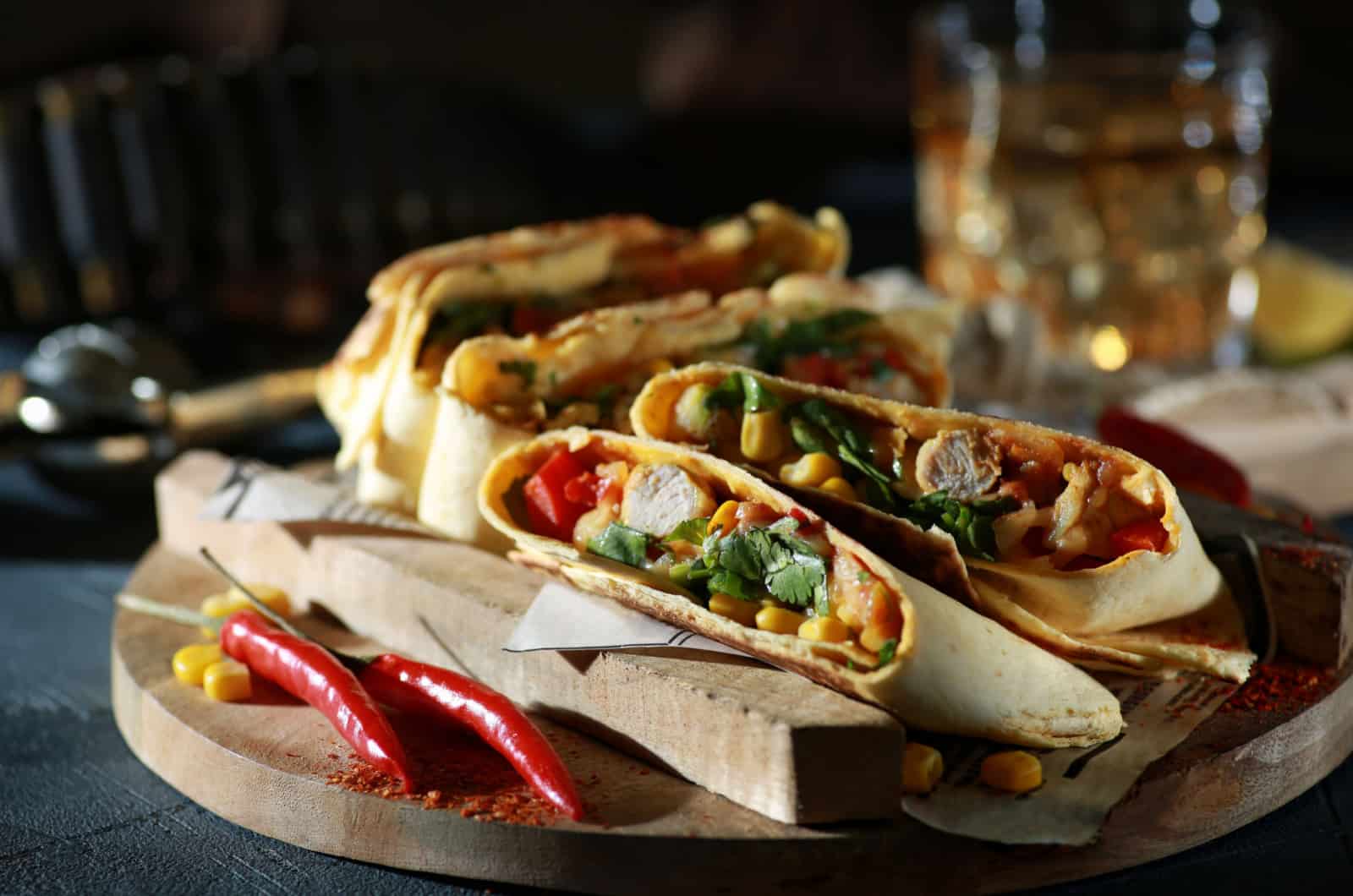 So, now you are surely wondering what the heck is this chimichanga you may have heard about. Well, it is actually a deep-fried burrito.

So, filling this spicy dish from northern Mexico with some peppers and slow-cooked beef, deep frying it, and adding some side dishes like servings of cheese, enchilada sauce, guacamole, or sour cream, and you have your delicious chimichanga.

Also, as for how to eat it, even though this is kind of a burrito in its own way, it’s not good to eat it like a burrito because it can be crunchy due to the deep frying.

That is it for the chimichanga vs burrito comparison, but there is also the enchilada, of course. Many people here in the US confuse a chimichanga covered in sauce with an enchilada. But, actually, enchiladas do not have to be covered with sauce and that is what separates them.

What Is The Difference Between A Fajita And An Enchilada? 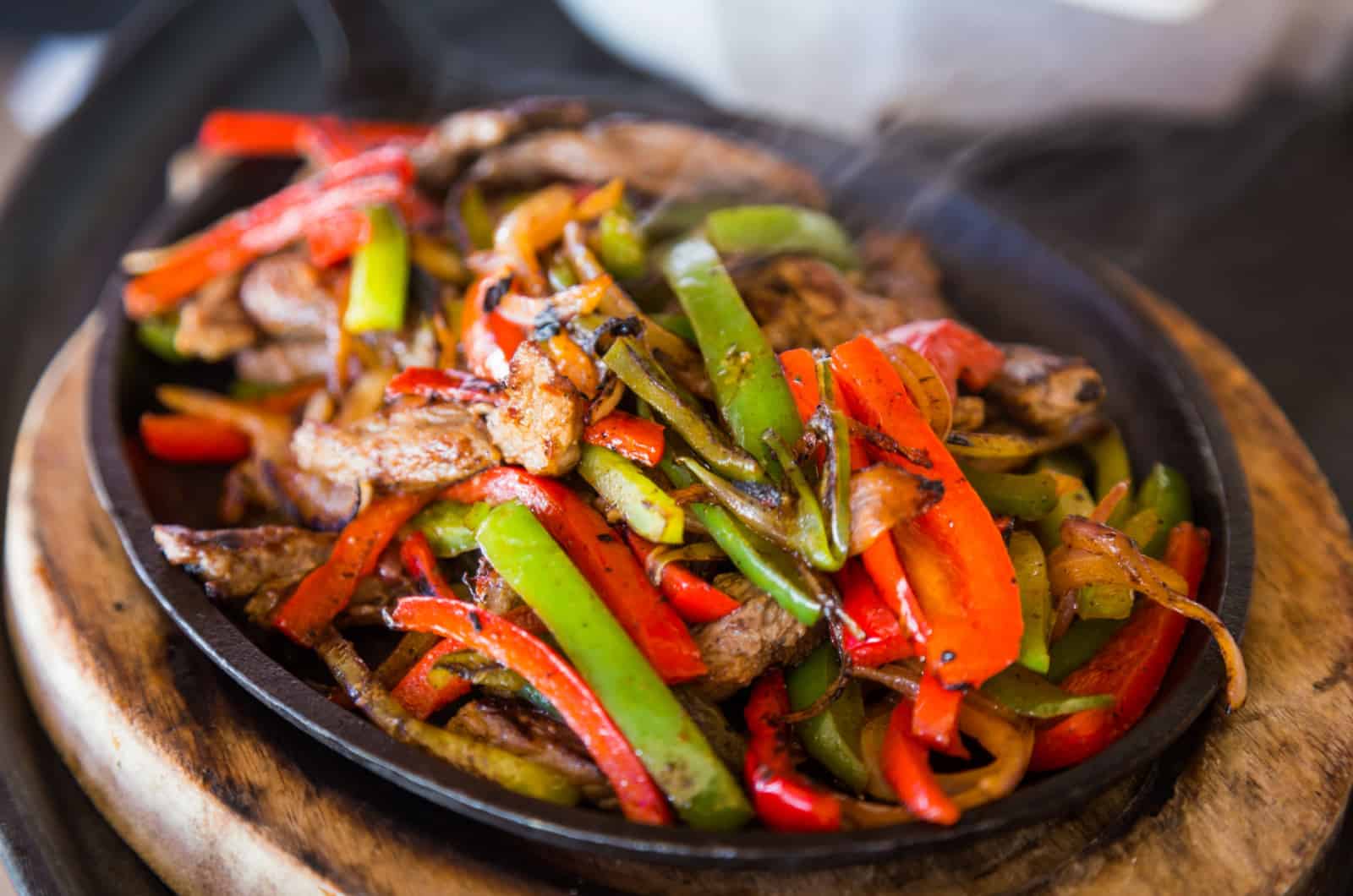 The main difference between a fajita and an enchilada is in the way the meat is prepared. When preparing enchiladas you are first going to shred the meat and then roll it in the tortilla. After doing that, you will cover it with sauce and in the last step, bake the dish.

When it comes to a fajita, the meat is usually striped and grilled with the addition of onions and strips of pepper. The whole mixture is served in a flour or corn tortilla.

Here it is also good to add, apart from the fajita, two other popular Mexican dishes that are very similar to enchilada and burrito. And those are taco and quesadilla. Tacos are small tortillas that can be crunchy or soft. They are mostly eaten with the hands just like burritos.

The main difference is that tacos can be filled with anything, that is, the filling is entirely your choice. On the other hand, a quesadilla is somewhat different. It is also a dish with a tortilla, but it is filled with cheese and sometimes with meats and spices, and then cooked on a grill or stove.

The link that it shares with the enchilada is that this dish uses a corn tortilla as well.

Is Enchilada The Same As Wet Burrito? 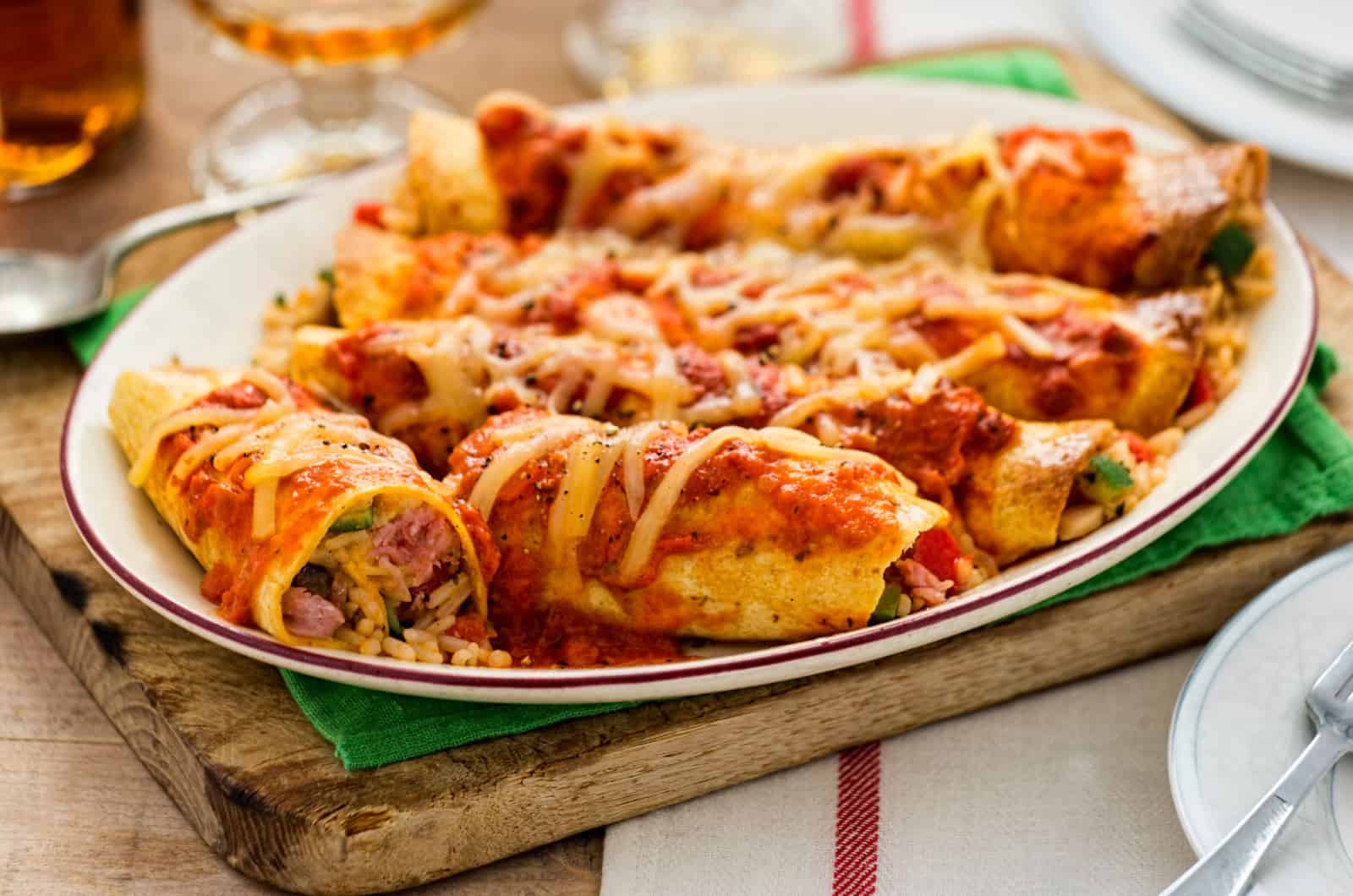 Enchilada is not the same as a wet burrito, but they are very similar. They are both dishes with rolled tortillas filled with similar ingredients and topped with sauce. But, there are also a few differences.

First, the tortillas are different. Enchiladas traditionally use corn tortillas while a wet burrito uses flour ones.

There is also a difference in the method of rolling the tortillas. While the wet burritos are fully closed, enchiladas are wrapped with the ends open.

And the last difference is in the serving of sauce. Enchiladas are cooked with sauce. On the other hand, burritos are first served on the plate and then you can add a sauce.

You can see that, as similar as these two Mexican dishes are, there are certain significant differences that you need to know if you want to dive more seriously into Mexican cuisine.

However, once you’ve gone through a detailed enchilada vs burrito comparison, I am sure you’ll have no trouble telling the difference between these two delicious dishes and will be able to enjoy their spicy flavors, whichever you choose.

9 Great Tex-Mex Paste Substitutes To Spice Up Your Meal

[…] you have ever eaten tacos, enchiladas, burritos or foods in that line, you surely know how important it is to have a cup of taco seasoning to […]

[…] you are making tacos, enchiladas, or burritos, the staple of Mexican cuisine called tortillas is something that you can not avoid. I am sure that […]

Does Salsa Go Bad? How Long Exactly Does Your Salsa Last

[…] in Mexican cuisine, salsa is a must-have when it comes to classic Mexican food like nachos, tacos, enchiladas, or burritos. It also goes well into many other dishes from various cuisines around the world like […]

How Long To Boil Chicken Tenders? + How To Boil Properly

[…] You can add it to some Mexican classics including enchiladas, burritos, or […]