When it comes to Chinese, or Asian cuisine in general, water chestnuts are often used ingredients.

They are aquatic tubers that originate from southeast Asia and parts of Africa. Maybe this seems a little strange to you, considering that they have the word chestnut in their name.

But actually, water chestnuts are not nuts at all. They are aquatic vegetables that grow in swamps and look like chestnuts with brown skin and white flesh.

Fresh water chestnuts have a crunchy texture, while boiled ones have a slightly crunchy and firm texture. When it comes to the flavor profile, water chestnuts possess a nutty, fruity, and sweet flavor.

Water chestnuts have a crispy flesh that is best used in salads, but they can also be a great ingredient in curries and stir-fries. They can be roasted, fried, or sauteed.

But what if you don’t live in China or some other part of Asia, considering that it is hard to find this vegetable in your local grocery store or supermarket?

You will, of course, need a good substitute for water chestnuts. And in this article, I will reveal to you some great alternatives.

So, what are the best water chestnut substitutes? Here is the list that will reveal some of the best crispy corm alternatives. 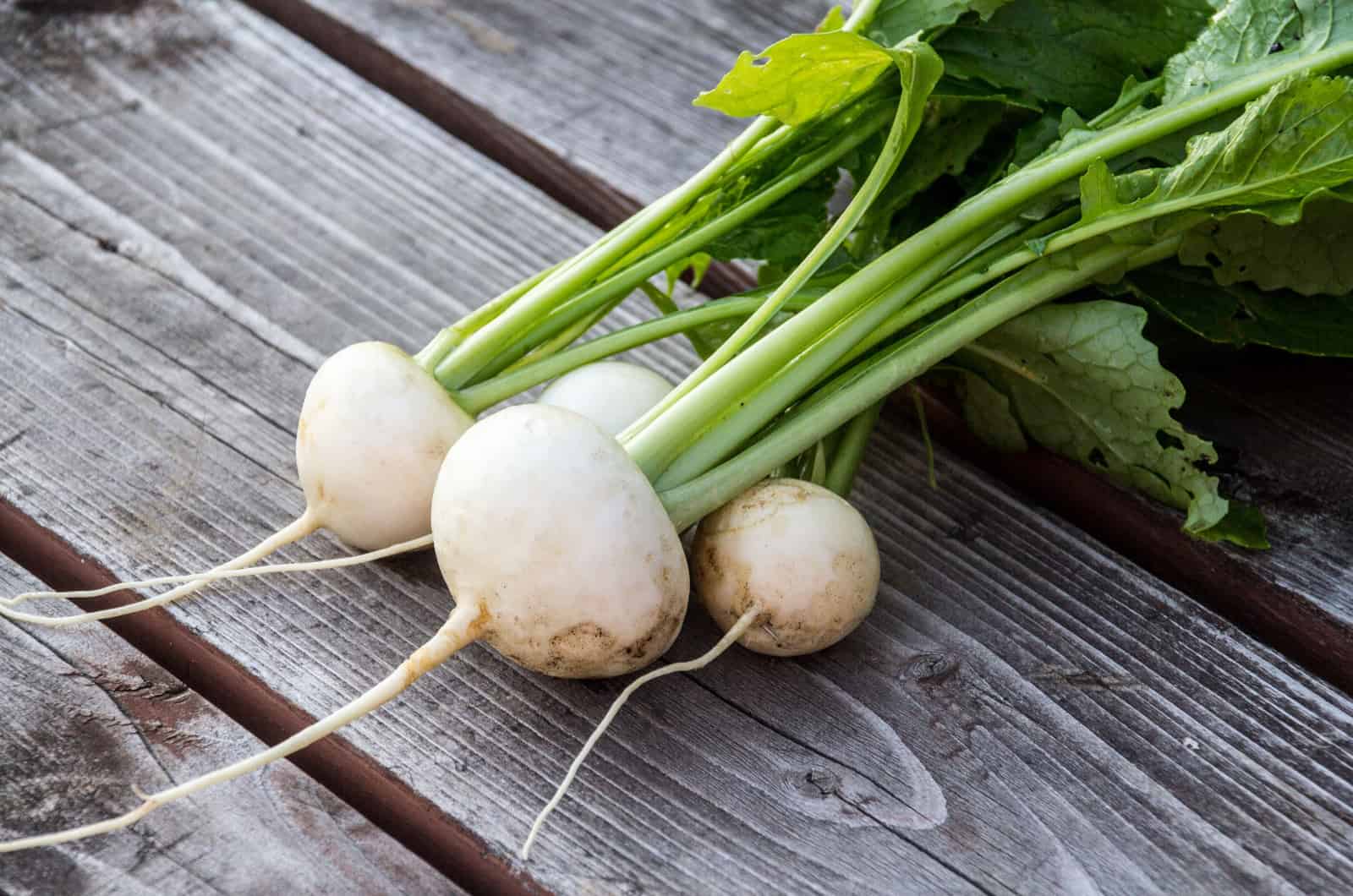 There are a lot of variants of turnips, but the best one for substitution of water chestnuts is definitely the white turnip.

The best thing about this root vegetable is that it is very cheap and readily available in your local grocery stores. But that is not the only reason why this white turnip got its place on the list.

Another important reason is its taste. Turnips have a delicate and sweet taste similar to water chestnuts. It can also be peeled and eaten raw.

White turnip is an excellent substitute for water chestnuts when you use it fresh in salads or roasted with some other vegetables like carrots. It can also be added to soups and you can prepare them as a side dish.

Jerusalem artichokes or sunchokes are actually not related to artichokes. They belong to the sunflower family. They grow underground and are similar to ginger root with the same brown skin and bumpy shape.

Jerusalem artichokes have a similar sweet and nutty flavor with a bit of crunch, just like water chestnuts.

They are best when prepared raw and they can be used in an equal amount as water chestnuts.

They can be a good substitute for water chestnuts in some recipes such as roasted vegetables, stir-fries, spinach dips, or in soups. 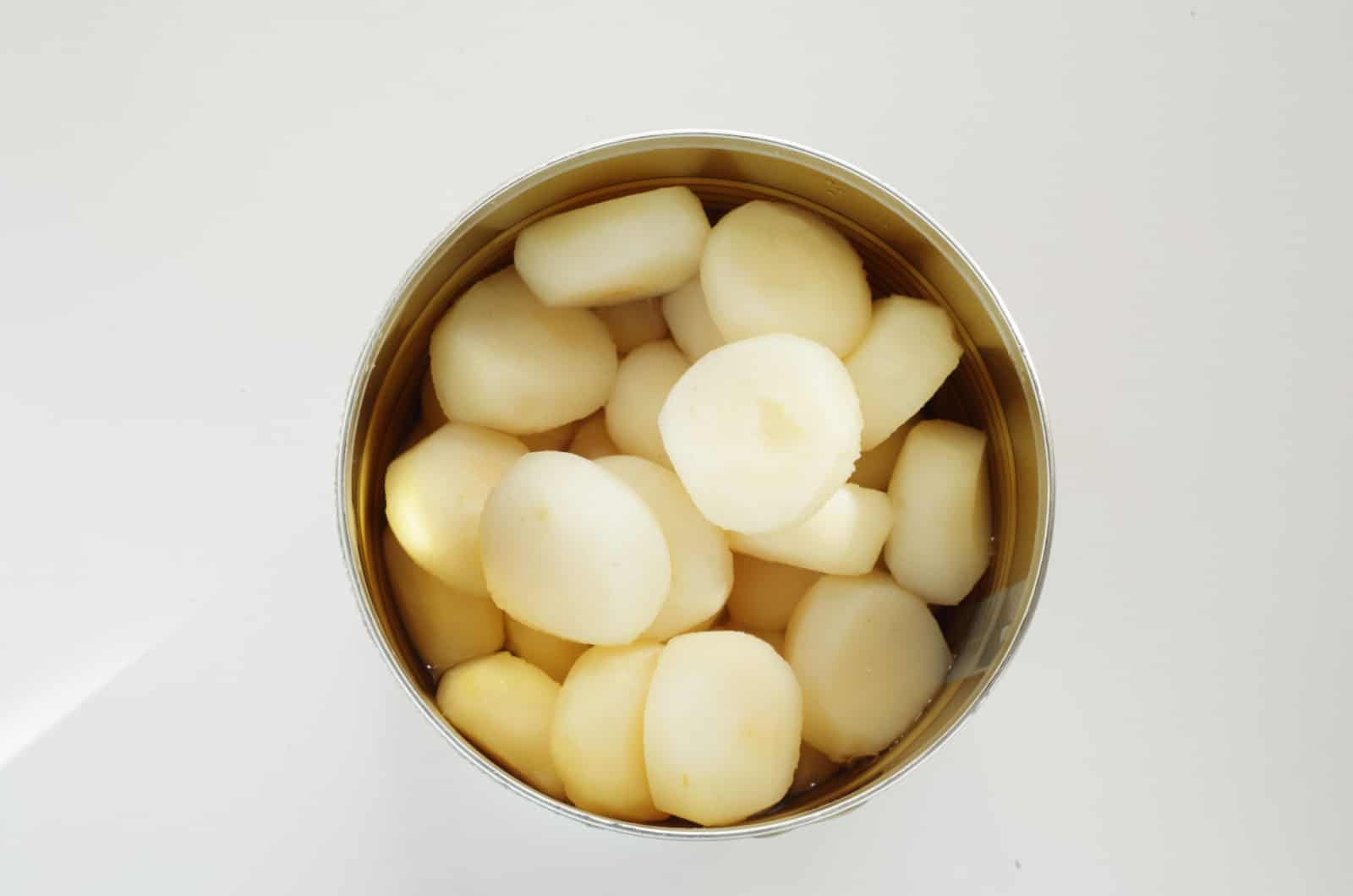 If you don’t have fresh water chestnuts on hand, you can always use the canned version. But you have to know that there are some slight differences.

But, if your goal is just to imitate the texture of fresh water chestnuts, then the canned version is an excellent option.

They can serve as an ingredient in many appetizers.

This root vegetable with golden-brown skin and a high starch content originates from Mexico, but it has spread all over Asia.

It has a sweet juicy taste and crunchy texture, so it can be a great alternative to water chestnuts. Just like raw water chestnuts, it has a low sugar content but, in their raw form, possess a sweet taste.

That makes it a great substitute for people who suffer from diabetes. It can be used in some recipes like sautes, stir-fries, boiled vegetables, or salads. It is also a good option in lettuce wraps.

If your dessert recipe calls for water chestnuts, but you don’t have them on hand at that moment, you can use pecans as a great alternative. They will give an extra nutty flavor to your dessert which you can blend with other ingredients like caramel, maple, vanilla, etc.

Pecans are the closest in texture and flavor to water chestnuts. They have a firm texture and, as I already said, a very nutty flavor. I must also emphasize that pecans are also known for their nutritional value and health benefits.

They are full of healthy fats, proteins, and fiber. When it comes to vitamins and minerals, they are also packed with magnesium, calcium, and potassium, which are good for your blood pressure. 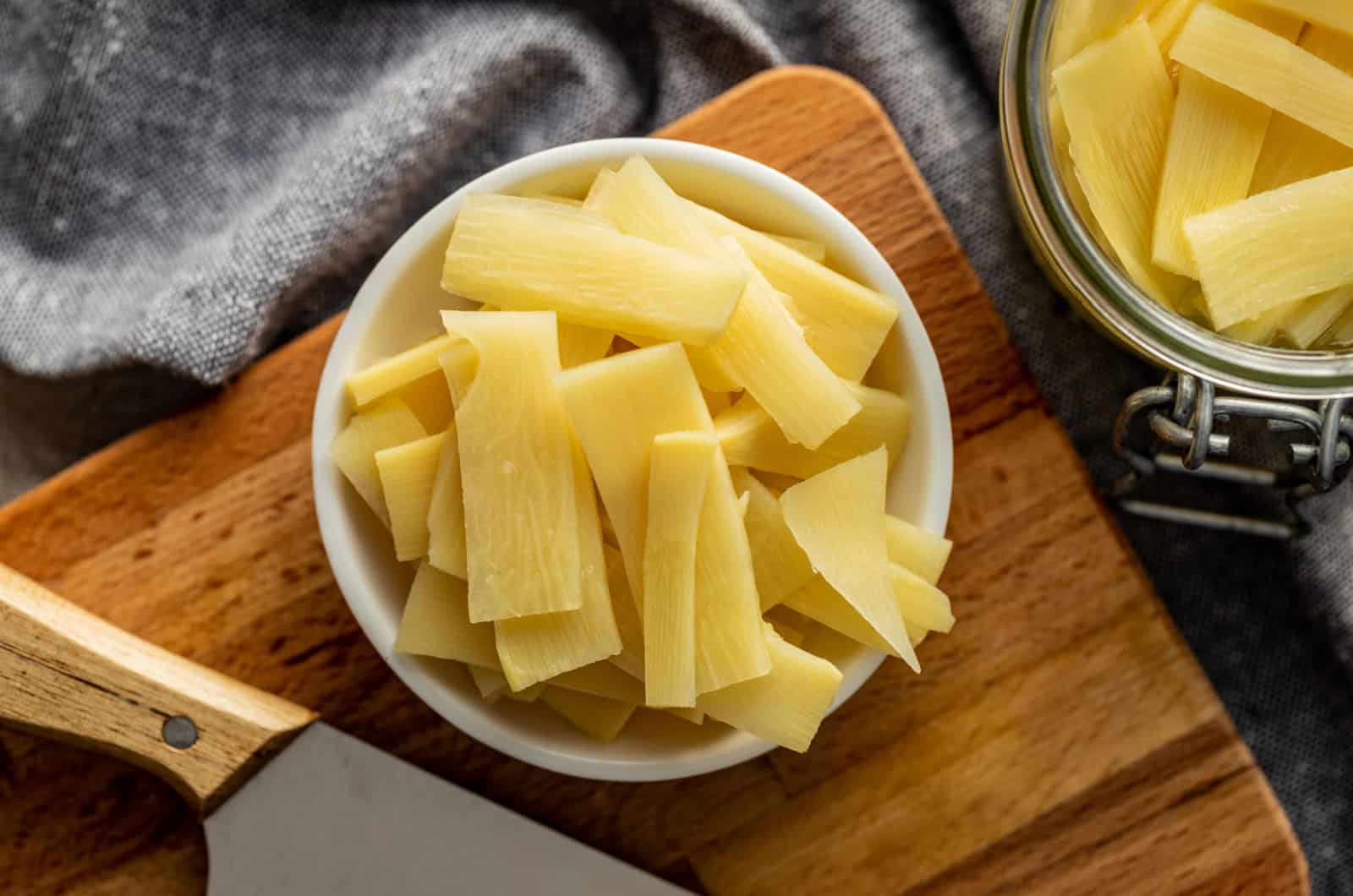 If you can’t use water chestnuts in your recipe, bamboo shoots could be a great alternative. They can be used fresh or canned and they can provide a similar flavor to water chestnuts.

Their flavor is earthy and nutty with some sweet undertones, and they can also add some crunch to your recipes. So if you want some crunchy texture in your dish, it is a good idea to use bamboo shoots.

Daikon is a very popular ingredient in Asia and it is very often used in their cuisine. Just like water chestnuts, it is mainly made up of water.

Its flavor depends on the part of it that you are eating or using in the recipe. That closest to the root is much more peppery, while the upper part is crunchy and sweet.

So, the upper part is more suitable as a substitute for water chestnuts, primarily because of the crunchy texture. The raw upper part of the daikon, which is also considered a low-carb vegetable, is ideal for recipes such as stir-fries, wraps, and salads.

Crosnes are usually used in China and Japan, and they are also known as Chinese or Japanese artichokes or knot roots.

They belong to the so-called mint family along with some popular herbs like lemon balm and mint, and other famous members of this family.

They have a crunchy texture and an earthy flavor, and that same earthy flavor makes them a worthy substitute for water chestnuts.

9. Celery: When You Run Out Of Options 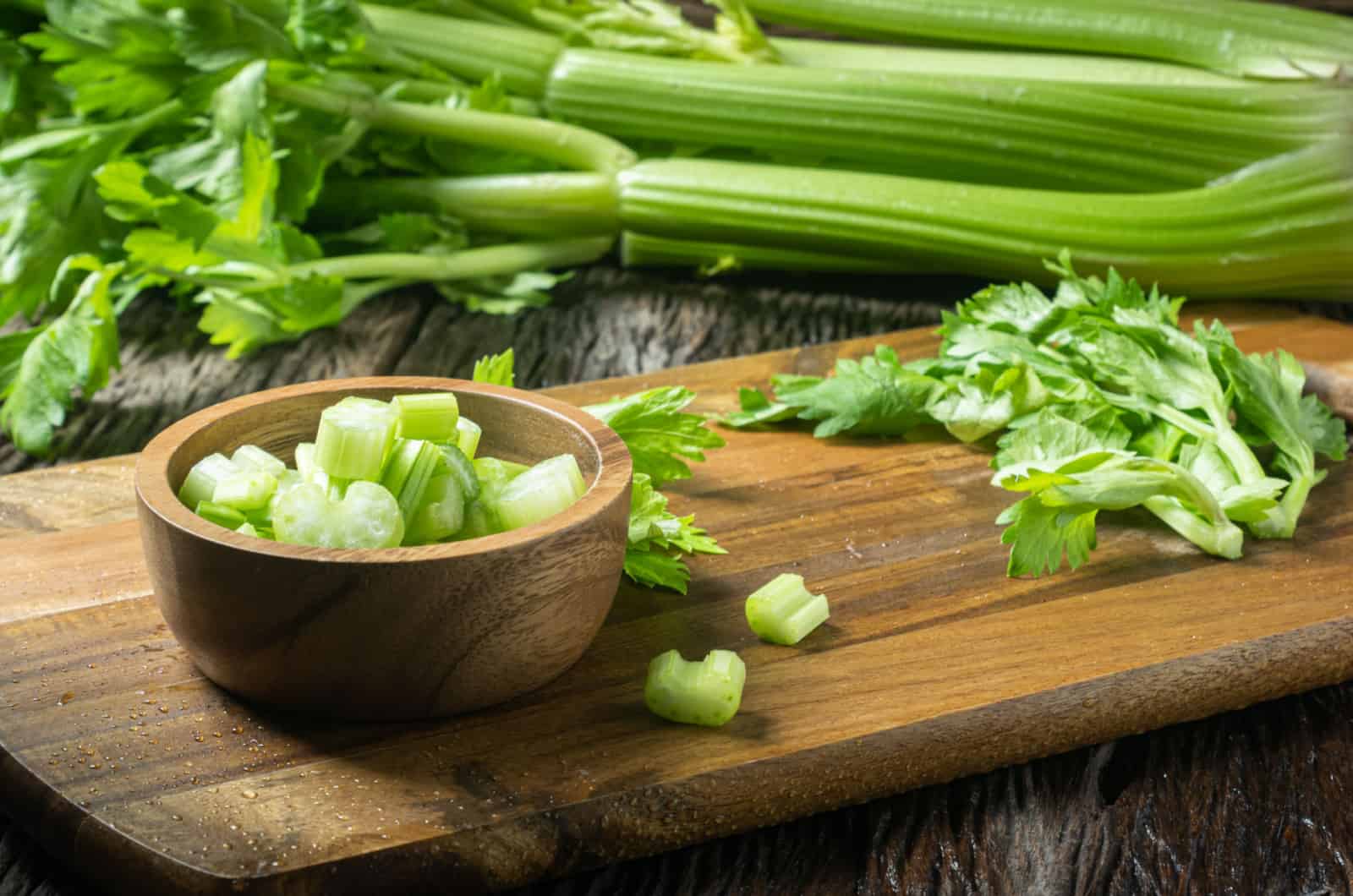 Honestly speaking, celery is not the best option when it comes to water chestnut substitutes. Celery stalk is full of fiber, which gives it that firm texture, and it is full of water just like chestnuts.

But when it comes to the flavor profile, they are not that similar. Celery has a stronger taste compared to water chestnuts.

And if you want to approximate the taste of water chestnuts, you will need to add some other ingredients to it. It can be used cooked or uncooked.

Celery is also very healthy because it is full of antioxidants such as vitamin C and flavonoids, as well as bergapten and lunularin. 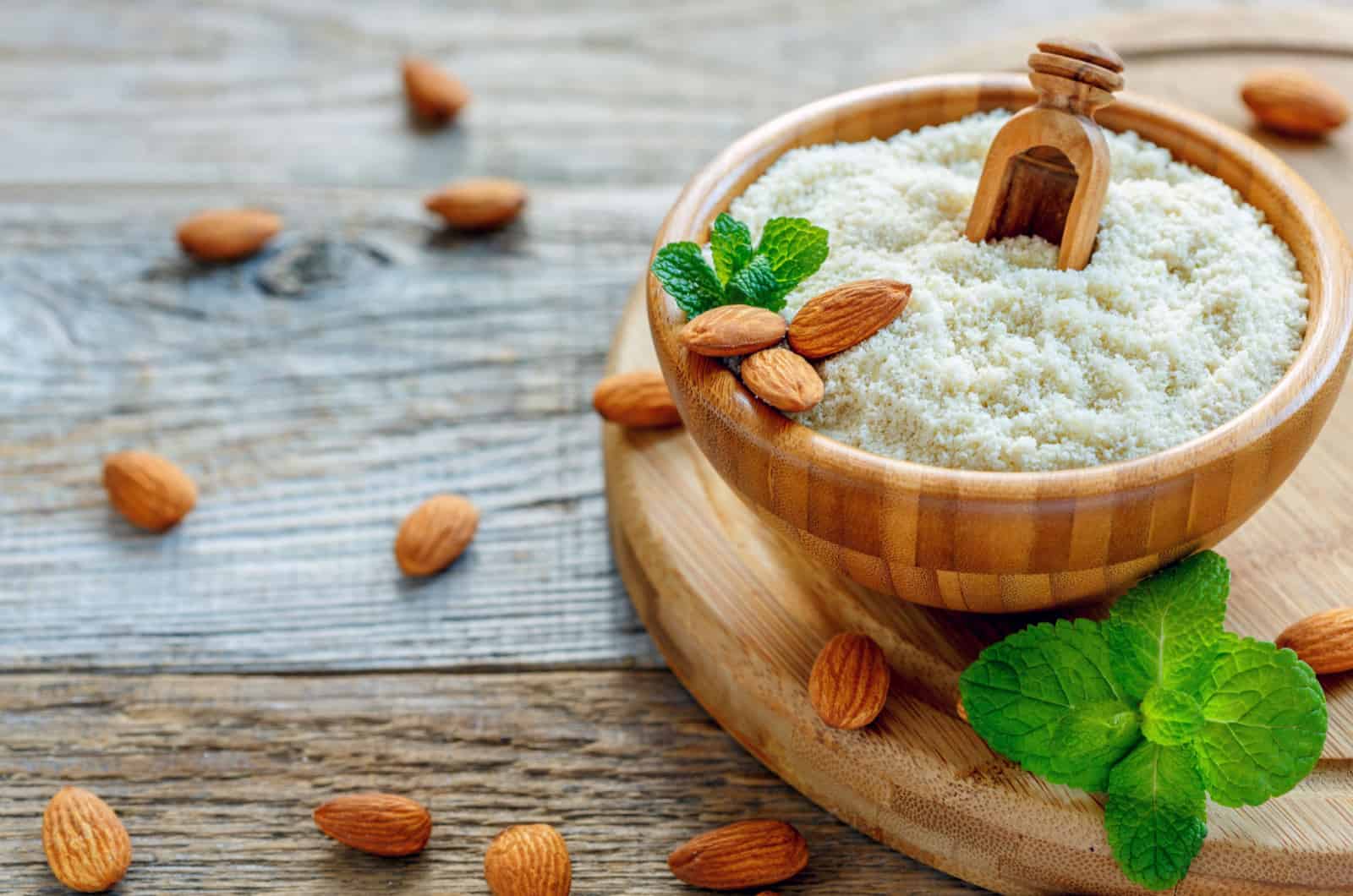 Water chestnut flour is a product of dried, ground water chestnuts. It is used as a thickener and to improve deep-fried recipes. But if you don’t have it on hand, there are some alternatives.

Almond flour is made by grinding blanched sweet almonds. It is a flour that is rich in protein and it is also gluten-free, making it highly suitable for people who are intolerant to gluten.

It is widely available and you can easily find it in many grocery stores or in health-food stores. Thanks to almonds, it possesses a nutty flavor similar to water chestnuts, but it is a little less sweet than water chestnut flour.

It is also important to emphasize that you can use the same amount of almond flour as water chestnut flour, so it is also easy to replace from that aspect.

Hazelnut flour is the product of raw hazelnuts and it represents a very good substitute for water chestnut flour. It is highly suitable for use in baking due to the fact that it is a grain-free nut flour.

The fact that it doesn’t possess a grainy texture, like almond and water chestnut flour, differentiates it. It doesn’t have the same carbohydrate structure and that is the reason for the different textures in the dessert.

Hazelnut flour isn’t as popular as the two previously mentioned flours, so it is somewhat harder to find in grocery stores.

But, all in all, it can be a decent substitute for water chestnut flour.

What Are Some Health Benefits Of Water Chestnuts?

There are a lot of health benefits of water chestnuts and some of them include reducing the risk of heart disease, lowering blood pressure, promoting weight loss, and fighting against cancer.

They are full of proteins and some nutrients like potassium, manganese, copper, riboflavin, and vitamin B6. They are also full of antioxidants, which fight inflammation and free radicals.

Those antioxidants are also good for fighting some chronic diseases like type 2 diabetes and many types of cancer.

Can I Use Chestnuts Instead Of Water Chestnuts? 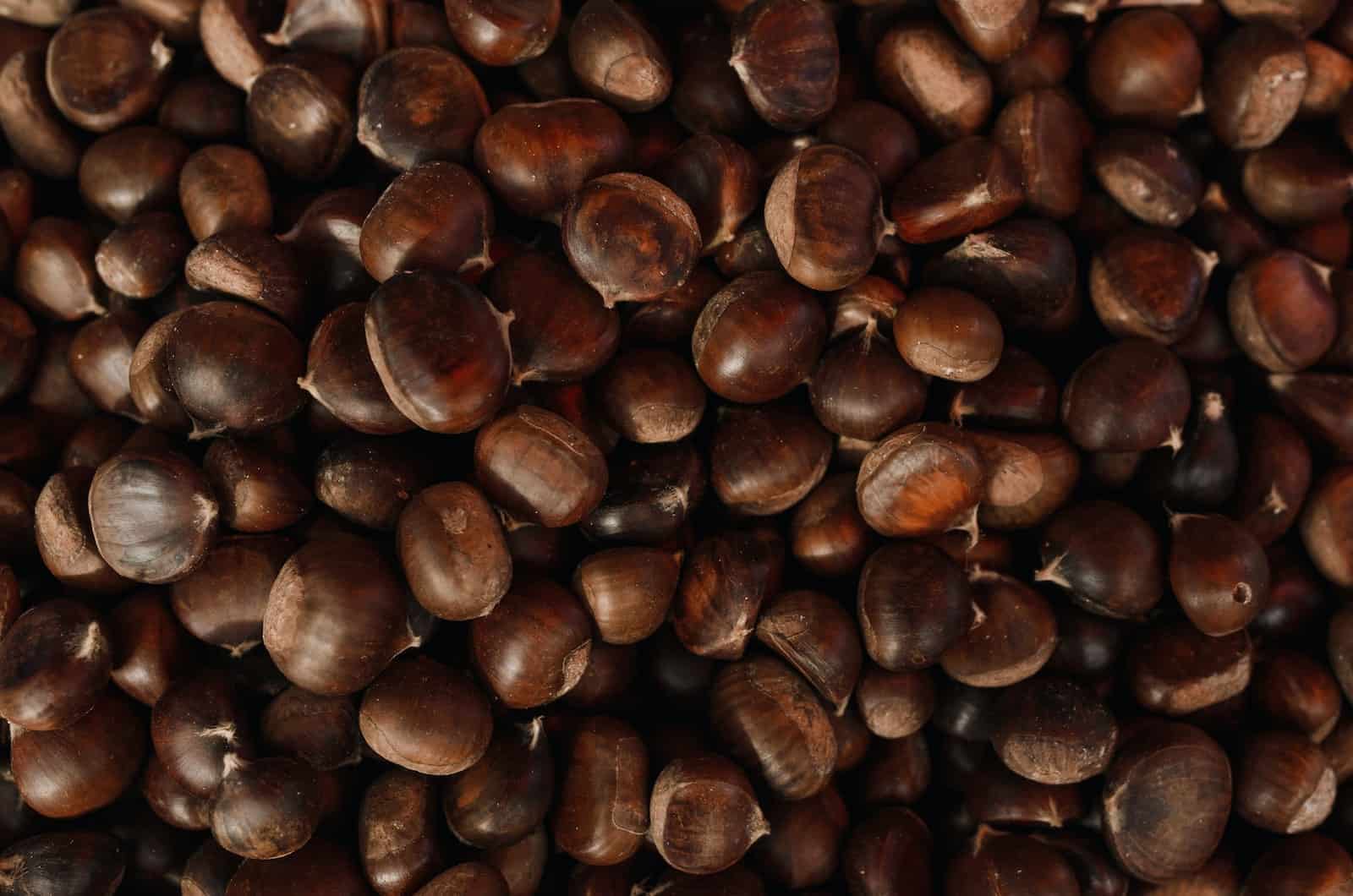 No, it is not a good idea to use chestnuts instead of water chestnuts. The main reason for this is that they are actually completely different things.

Chestnuts are the fruit of the tree, while, on the other hand, water chestnuts are part of the root structure of a plant that grows underwater.

Water chestnuts are actually only named as such because they resemble chestnuts in shape, size, and skin color, and they got the adjective because they grow in water.

As for the use in dishes, you should definitely not confuse these two.

So, if you do not have any water chestnuts on hand, one of these great alternatives will definitely help you compensate for that absence.

If you intended to make a delicious dessert with water chestnut flour and you don’t have it in your kitchen, one of these alternatives will definitely help you to solve that problem as well.