It can sometimes happen that the two words are semantically so similar that you may think that there really is no difference between the two items they present. You may think that it is a typo for some other word. And that is something that happens to people very often.

But, in reality, things are not so simple, i.e. it is not all black and white. In some cases, there might be a lot of similarities, but there might be some major differences and that is important after all.

In this article, I will present you with a comparison between culantro vs cilantro. These two herbs are very similar when it comes to terms but, in reality, when you see them in the grocery store next to each other, you can see that they are quite different.

Both herbs come from the Apiaceae family, but they are two different herbs and they are extremely different in appearance.

They are also quite different in flavor since culantro (Eryngium foetidum) has a much stronger flavor then cilantro (Coriandrum sativum). Since they differ in flavor, they are also used in different dishes.

But let’s see what those differences are in more detail and some other interesting facts about these two incredible herbs. 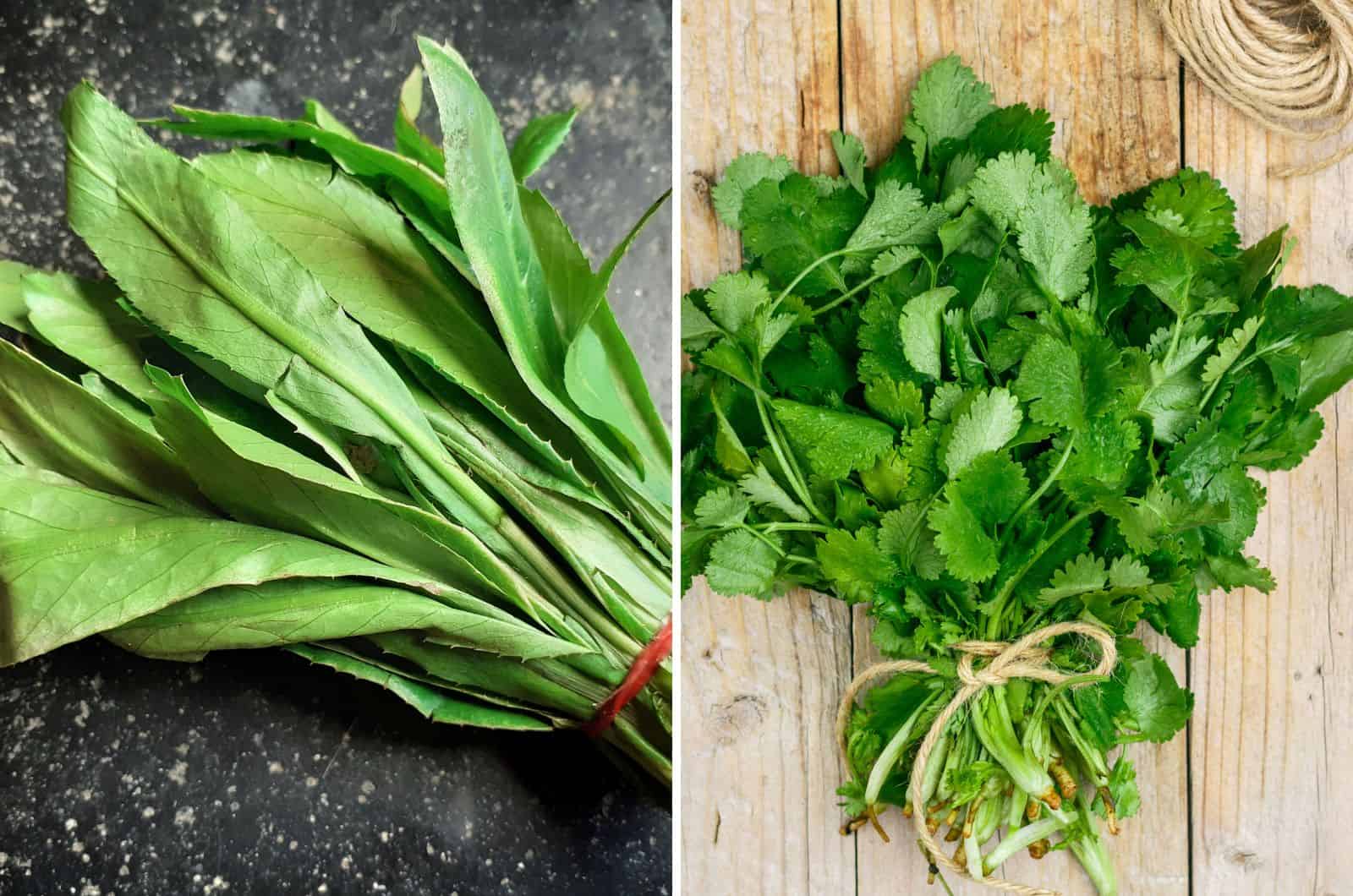 As I already promised, here is a detailed culantro vs cilantro comparison in 4 main categories that include appearance, taste, planting and harvesting, and culinary uses. So, let’s begin, shall we?

As I already said, these two herbs have very similar names but when you see them next to one another in the grocery store or supermarket, you will see that they are very different in appearance.

Even the other name for cilantro is Chinese parsley and that is not a coincidence.

Cilantro leaves are very similar to those of coriander or parsley since they are rounded, scallop-shaped leaves and you can more easily mistake cilantro for parsley than culantro.

They also grow in bunches and their structure is similar to that of a tree.

On the other hand, culantro has long, thin, serrated leaves and looks more like Chinese cabbage. Or, you can also mistake it for some kind of sharp-edged seaweed as well. There are some people who refer to culantro as broadleaf cilantro.

All in all, mistaking culantro for cilantro is very difficult and I do not believe that it is even possible to mistake these two herbs that are so different in appearance.

First things first, culantro has a much stronger taste than cilantro does and that is the main difference between them when it comes to taste.

When you plan to cook with culantro, you have to be extra careful because if you put it in the dish after cooking, it may ruin it because of its extremely strong taste.

On the other hand, cilantro doesn’t have to be cooked, i.e. it can be used raw because it has a much lighter taste.

Also, it isn’t very recommendable to cook cilantro because you will lose its muted, earthy taste. So, it is recommended to use it raw and it is definitely best to use it as the garnish.

To sum up, the only real difference, when it comes to taste, between cilantro and cilantro is that culantro has a much stronger taste than cilantro, so you need to be extra careful when adding it to your dishes.

There is one more important difference between culantro and cilantro. Culantro is a perennial herb, which means that it needs several years to grow again from the same shoot.

So, if you are growing culantro in your garden, I would recommend that you not cut its leaves, but leave the young and small ones in order for them to grow bigger and allow the plant to develop more.

When it’s time for harvesting, there will be a lot of leaves and you will be able to harvest them as needed. If you find some extra leaves, you do not need to worry because you can keep them in their dried form or you can freeze the fresh ones by putting them in an airtight container.

When it comes to cilantro, this is an annual herb which means that it dies off every year and grows back from the seeds it produced. Because of that, you don’t have that much of a job with this type of herb.

When it comes to harvesting, the same applies to cilantro, i.e. you can keep it in dried form using a dehydrator or a slow, low oven. And, you can also freeze it using an airtight container just as is the case with culantro.

Starting with culantro, also known as shadow beni and recao, it is both a cooking and medicinal herb that is widely used in the Caribbean, Far East, and West Indies. It can be found in Central America and South America. It is very popular in South American cuisine.

It is also very popular in Asia, mostly in Malaysia, Thailand, and Singapore and there it is often used as an ingredient in curries, noodle dishes, stews, and soups. You can also find it in Chinese and Thai dishes.

It can also be found in Panama where it is used for making “Sancocho” which is their version of chicken soup broth, or sofrito (an aromatic blend of herbs and spices). It can be also used as a garnish in some dishes like Vietnamese beef noodle soup.

And, along with scallions, parsley, onions, and sweet green peppers, they use it to make a green blend called “recao verde” which is used to marinade meat.

Here, in the US, it is not that popular but it can be found in some West Indian, Asian, and Latin American immigrant communities.

On the other hand, cilantro is much more popular here in the US and in European dishes. That is due to the fact that these continents have climates suitable for this kind of herb.

Also, when it comes to Latin America, there are many Mexican dishes that include cilantro and the most important ones are salsa, taco, burrito, chimichangas, salads, and guacamole.

Also, in these countries, cilantro is very often used as a garnish in dishes.

What Are The Health Benefits Of Culantro And Cilantro? 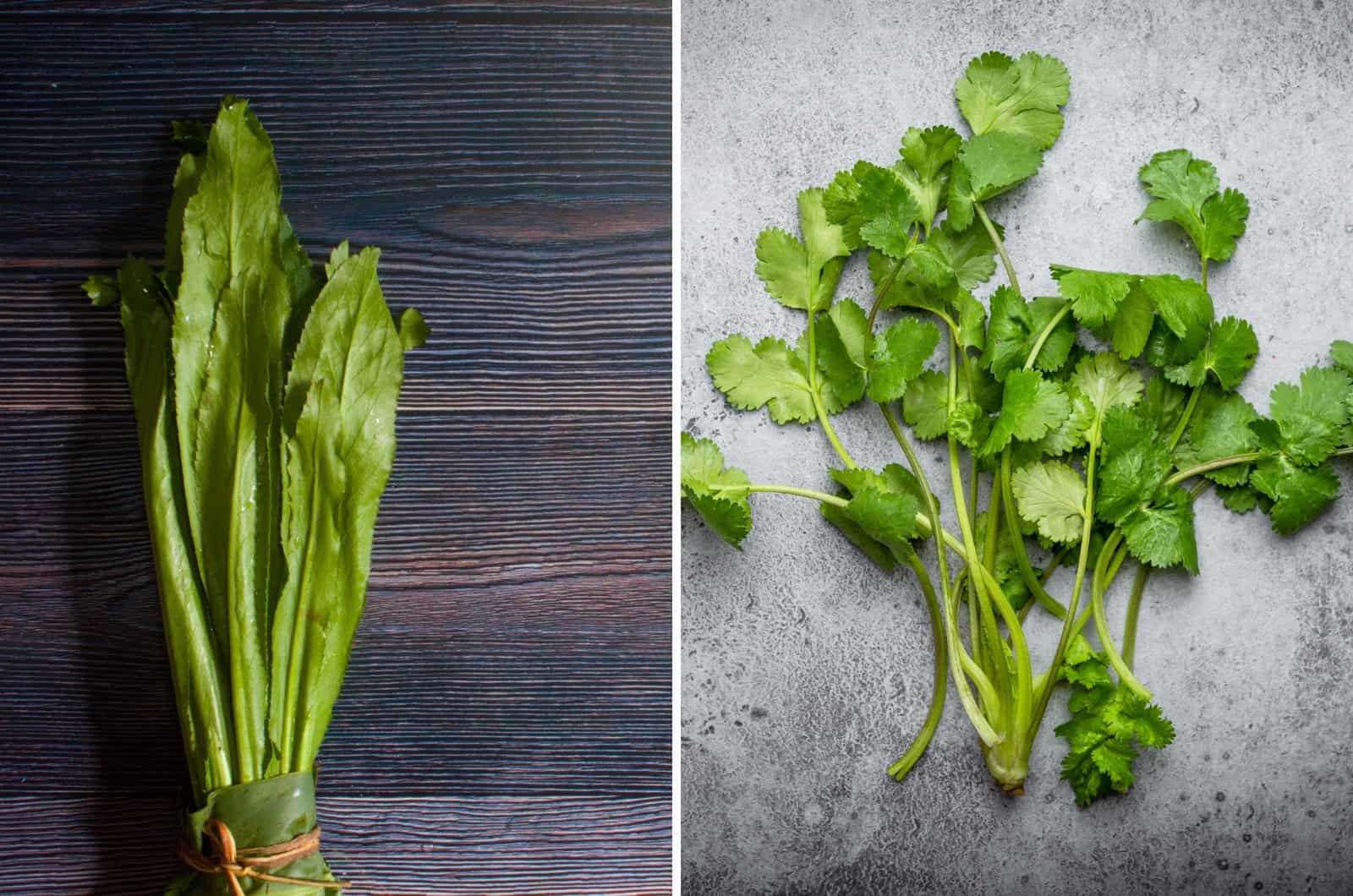 When it comes to health benefits and nutritional value, these two herbs are very similar. Here, I will outline all the important nutrients that these incredible herbs possess. Those nutrients are:

These two healthy herbs fight against constipation, diabetes, fevers, and flu. They can help your bones stay strong and they can maintain the functions of muscles, heart, and nerves.

And they are great for your immune system and vision as well.

So, as you can see, the nutritional value of these two herbs is huge and you can get some serious health benefits by consuming them.

We can also conclude that this is one huge similarity that these two herbs possess.

Culantro, also known in Puerto Rico by the name “Reacao”, is a different herb to cilantro that belongs to the same Apiaceae family. This culantro vs cilantro comparison wasn’t easy at all, but I did my best to present you with the main differences in 4 main categories.

If you read this text carefully, you will find that there are some major differences between these two herbs although their names are almost the same as well as their taste and nutritional value.

[…] Dried cilantro is a great substitute for dried mint, if you ask me. It has a similar flavor but with a less intense taste. Cilantro leaves are often used in Mexican and Indian cooking. They are also used as an herb in salads, soups, and dips. […]