Contents show
1 How Much Mochi Donut Calories Are There?
1.1 Nutrition Facts (per serving)
2 What Are Mochi Or Pon De Ring Donuts Made Of?
3 Know Your Doughnuts And Glaze

There’s a new donut on the block. The mochi donut is a popular type of donut made from dough shaped into small balls and then deep fried.

They are typically served with red bean paste, sweetened condensed milk, or other toppings. I get the new craze in the donut world, and I am all for it. But most of us need the nutritional facts and mochi donut calories to understand them better.

Luckily, this article will provide you with all you need to know. I will tell you about their calories, nutrition facts, and what they are made from. Enjoy!

How Much Mochi Donut Calories Are There? 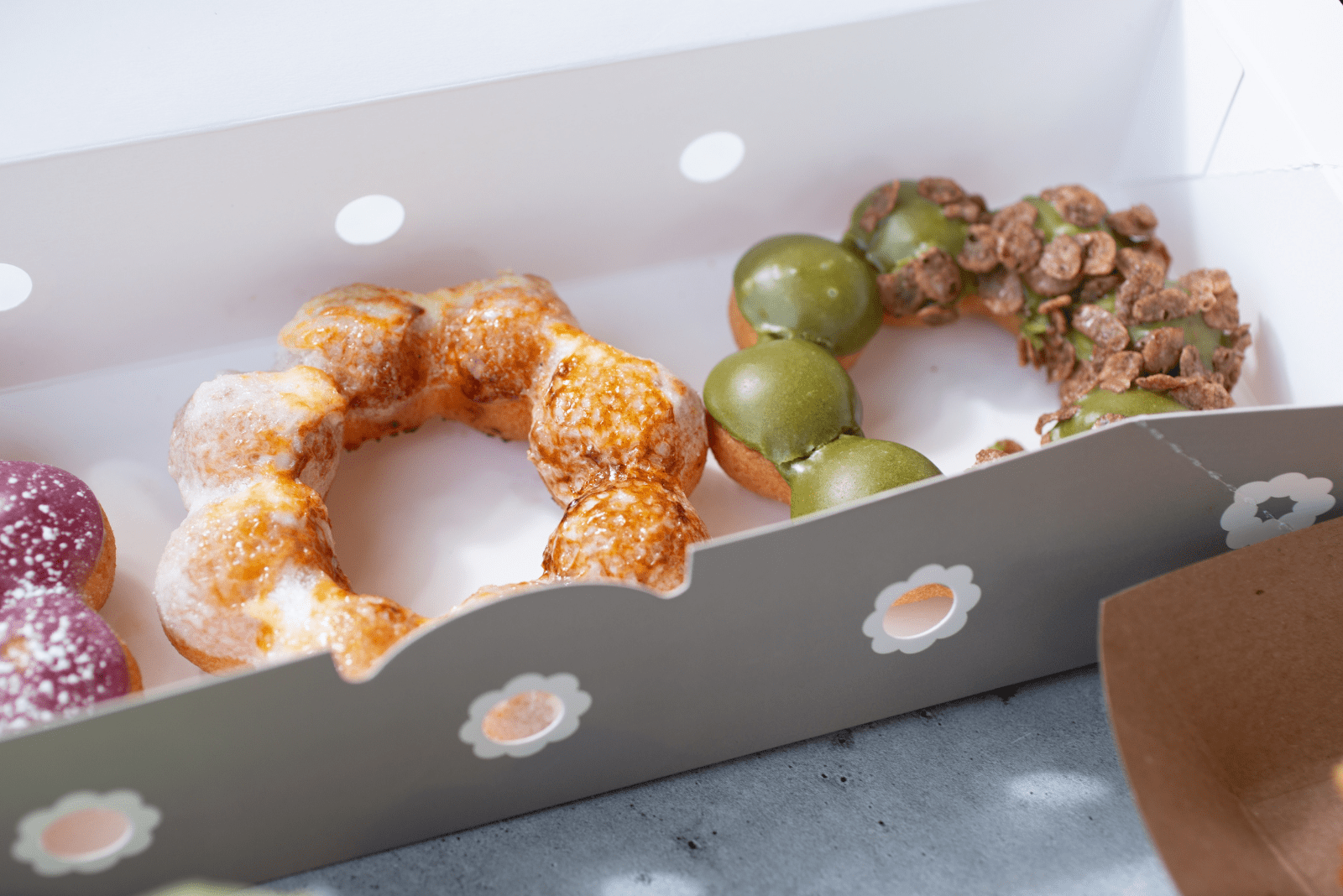 Every doughnut is different. An unglazed mochi donut calories count up to 140 kcal per donut, with 54 kcal from fat. This includes a total fat index of 6 g. Total carbohydrates are present at about 19 g. When it comes to protein, there is 0 g of protein in your unglazed mochi donut.

Of course, different donuts have different caloric intakes and serving sizes. This is why the Mikiko or glazed donut has 220 kcal, 39 g of carbs, 6 g of fat, and 3 g of protein.

When it comes to the homemade version, the daily value of calories also goes up. This is important nutritional information you need to know, especially since this is normal for desserts like mochi doughnuts.

The granulated sugar and chewy texture of your mochi donut recipe make your homemade doughnut full of calories. This means it will have 300 cal per serving, 10 g fat, 47g carbs, and 4 g protein.

This means homemade mochis take up 10% of your daily fat intake while having 3 g of saturated fat and a low percentage of cholesterol and sodium, or 11 and 4% of your daily intake. There is 8 g of total sugar, 4 g of protein, and 70 mg of calcium.

Of course, there are trace amounts of iron, potassium, and vitamin B12. There is no vitamin A, dietary fiber, trans fats, or vitamin C. Here is how that would look in a nutritional facts table:

What Are Mochi Or Pon De Ring Donuts Made Of? 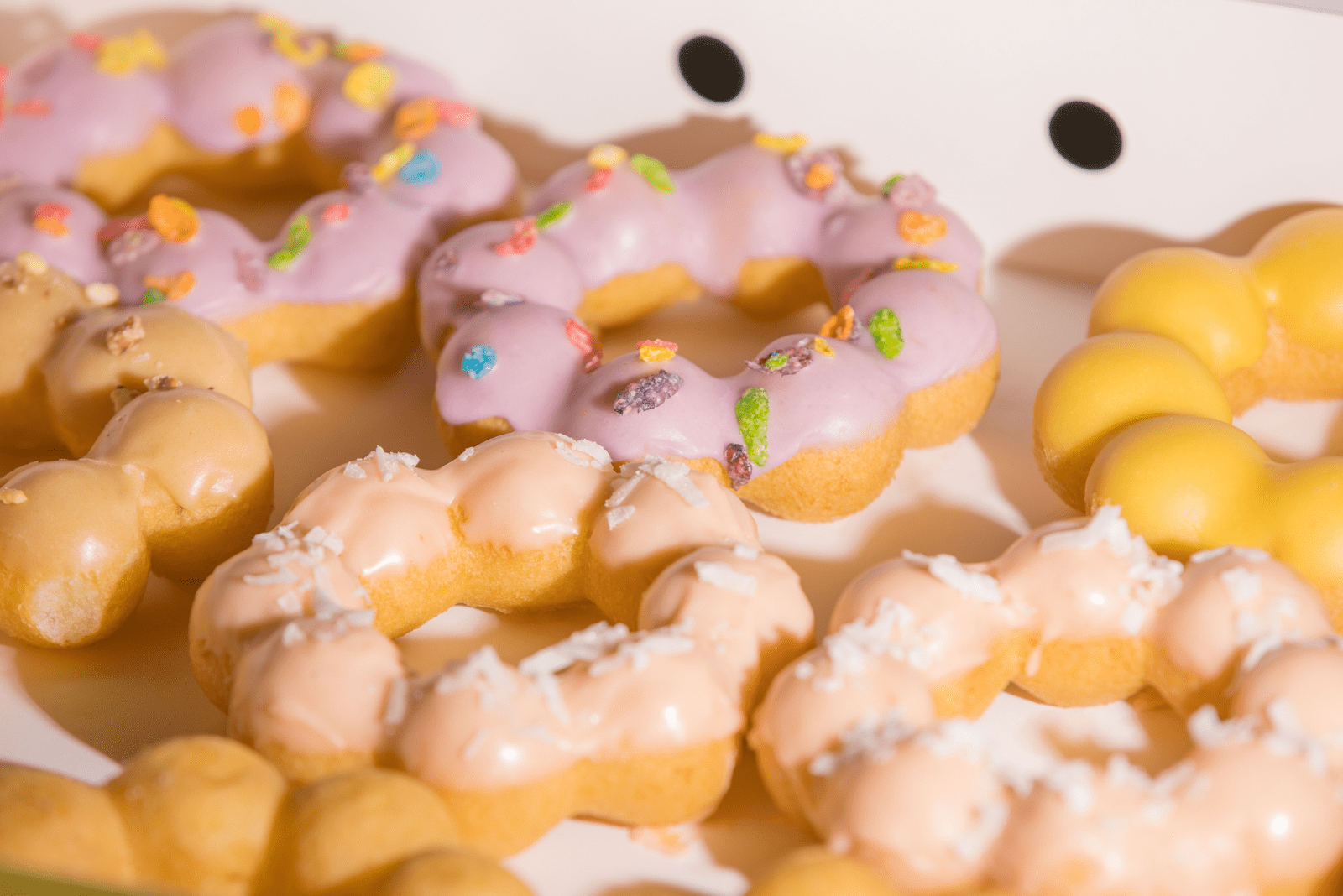 Mochi donuts are traditionally made of sweetened, steamed rice flour dough that is shaped into small balls and then deep fried.

Mochi donuts are a type of Japanese confectionary made from a batter of flour, water, sugar, and salt. They are small, round, and typically found in East Asia.

Most of them can’t be gluten-free as they are made with glutinous rice flour, baking powder, and oil and fried until golden brown.

Mochi is traditionally made by kneading the paste on the back of the hand with both hands in a circular motion. When making these sweets, one generally uses vegetable oil according to the recipe.

When the donuts are crispy and the total time of 5 min for deep frying is over, you put them on a paper towel and wait for them to cool. After that, you eat or glaze them.

They can be glazed with matcha powder, black sesame, powdered sugar, tapioca, and mochiko. The most popular glazes are white chocolate and strawberry glaze, eaten with heavy cream.

Know Your Doughnuts And Glaze

Mochi donuts are commonly found in Japan and are often used as a snack food. They are typically consumed as part of Japanese tea ceremonies or as an accompaniment to other dishes. They are essentially deserts.

I hope my article helped you understand both mochi donut calories, nutritional facts, what they are made of, and whether or not they fit into your diet plan. In any case, they are unbelievably delicious.

[…] you like to eat popular Boston cream donuts, some Krispy Kreme classics, or the little less popular Mochi donuts, you must know how long donuts are good for and how to properly store them in order to preserve […]

Do Donuts Have Eggs? In Search For Vegan-Friendly Donuts

[…] personally really like the Japanese type of donuts called mochi donuts, but those donuts do contain […]