You were looking forward to shrimp dishes all week or even after your vacation. When you finally have the time, you start preparing all the ingredients, and then you see it: there are some white spots on your shrimp.

What should you do now? And even worse, your raw shrimp is already thawing. How can you know if it is a disease, or has your frozen shrimp got freezer burn?

In any case, remember that your health is undoubtedly more important than the shrimp pasta you were craving. This is why I am bringing you a shellfish guide to understanding white spots.

After reading this article, I am sure you will know the difference between freezer burn and bad shrimp meat.

White Spots On Shrimp: What Are They? 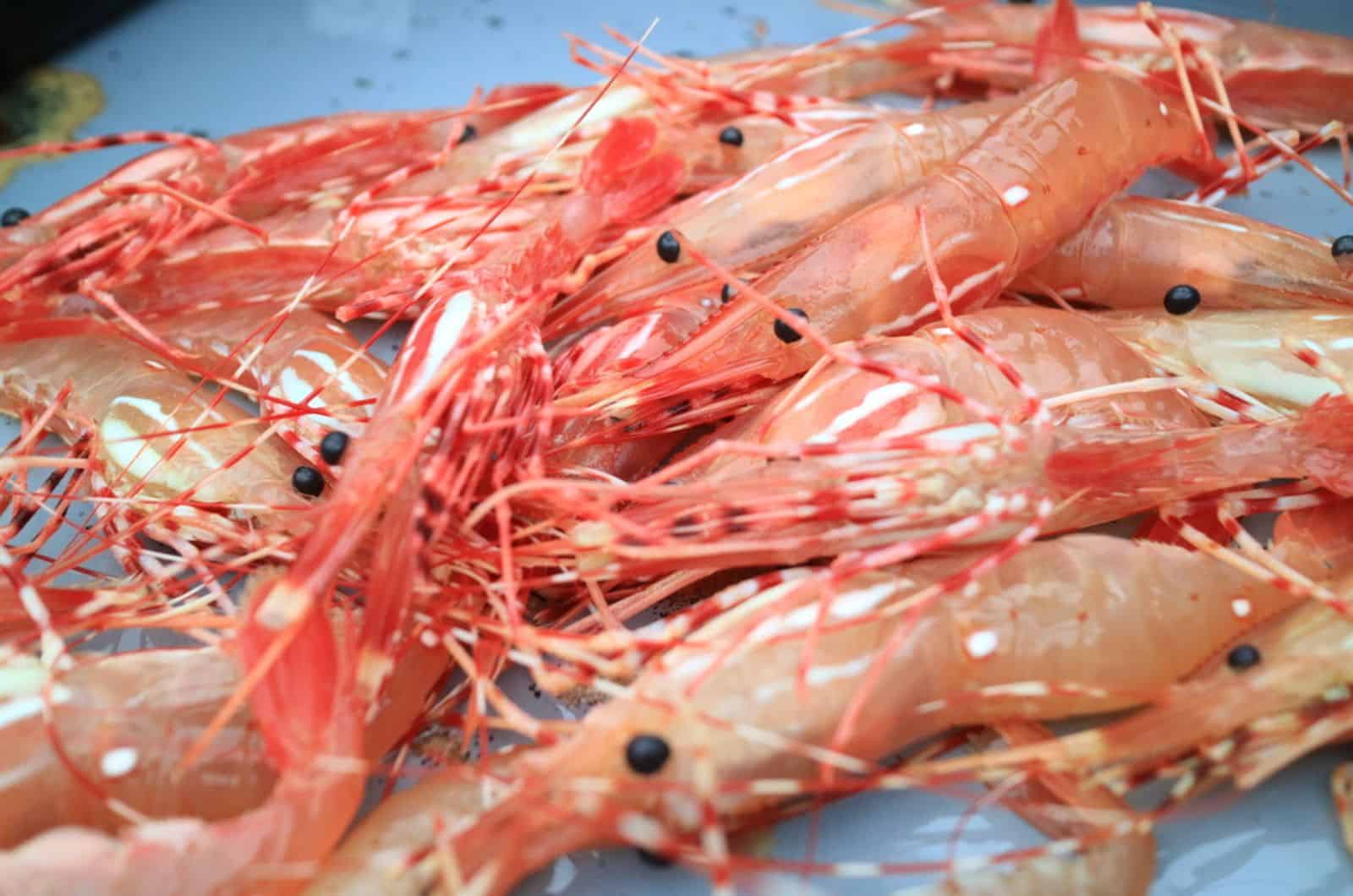 Shrimp is a type of seafood that is typically eaten by boiling, frying, or baking. Shrimp are small crustaceans with long tails and two pairs of antennae.

Shrimp are mostly found in salt water but can survive in both freshwater and saltwater. They have a hard exoskeleton, carapace, or shrimp shell, which makes them difficult to peel or devein.

Aquaculture is known to breed tiger shrimp in the US, but shrimp farming is also introducing new species of prawns. Shrimp can be prepared in many different ways, including sautéing, deep-frying, steaming, boiling, and grilling.

Freezer burn is a term used to describe the phenomenon when food has been left in the freezer for too long and becomes dry, hard, and brittle. When shrimp has been frozen for too long, they turn grey and rubbery.

Freezer burn on shrimp happens when they are exposed to temperatures below 0 degrees Celsius for more than two months. Of course, this can occur when shrimp are exposed to air or improper storage as well.

This type of white glaze on shrimp can be prevented by freezing them in a container with an airtight lid or wrapping them tightly before putting them in the freezer.

Freezer burnt shrimp are gray, have white or black spots or other discoloration, have a buildup of ice, and are chewy.

Freezer burn is a common occurrence when people are not careful enough with their food storage. It can also happen when they put items like meat and dairy in the freezer without wrapping them properly.

There are many ways to prevent freezer burn from happening, such as storing your food properly and using it before it spends long periods of time in the freezer.

You can still eat this shrimp since no spoilage occurred, but the shrimp look like they have bacterial growth. Just make sure not to leave them out for too long at room temperature, and they will even be good for refreezing.

White spots on shrimp are caused by a condition called “white spot syndrome.” It is a disease that affects the shrimp’s gills and causes them to die. White spots can be found on the heads, bodies, and tails of shrimp. They can also be found in clusters or in lines.

White spot syndrome virus in shrimp is a disease that causes white spots on the shrimp’s body. It is caused by a viral infection between the shrimp and cannot infect humans.

WSSV is caused by viruses that live in the water where they are raised. The virus causes white spots to appear on their bodies as they grow older. Still, shrimp with white stuff on them can be eaten and pose no threat to humans.

This is a disease that has been around for more than 200 years but was only discovered in the 1980s. White spot syndrome can cause a lot of problems for shrimp farmers.

6 Ways To Determine The Food Safety Of Your Shrimp 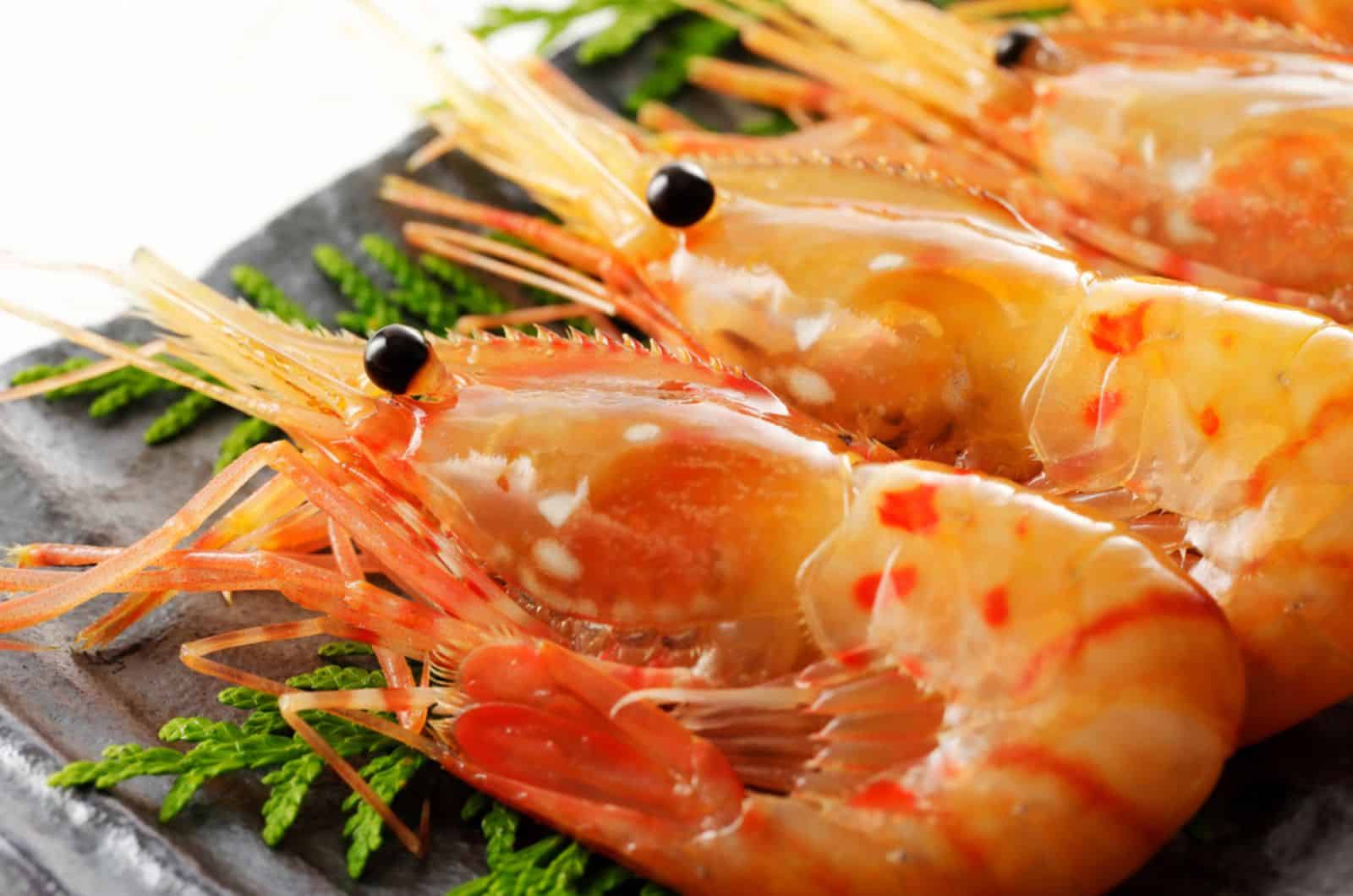 White spots on shrimp can be one of two things. Here is how to tell the difference:

Use cold water to thaw your shrimp. This way, you will be sure if you’re seeing white spots on shrimp or just ice crystals. In order to determine if it is safe to eat, you need to thaw your shrimp for 20 minutes at room temperature before cooking them.

2. Pull the shell off

The smell of shrimp is a good indicator of whether or not it is safe to eat. It can also help determine the quality of the shrimp. This is because the smell of shrimp depends on its age, freshness, and bacteria. If the shrimp smells bad, it’s probably gone bad as well.

If you notice the color of the shrimp’s shell, it will be bright and white. If you notice a dark red or black color, then the shrimp is not safe to eat. Therefore, make sure to inspect your shrimp, especially if they have white spots on them.

The best way to do this is by looking at the use-by date on the package. If it’s anything after that date, then you should not eat it. If your shrimp has expired, it’s no surprise that they have white dots on them. 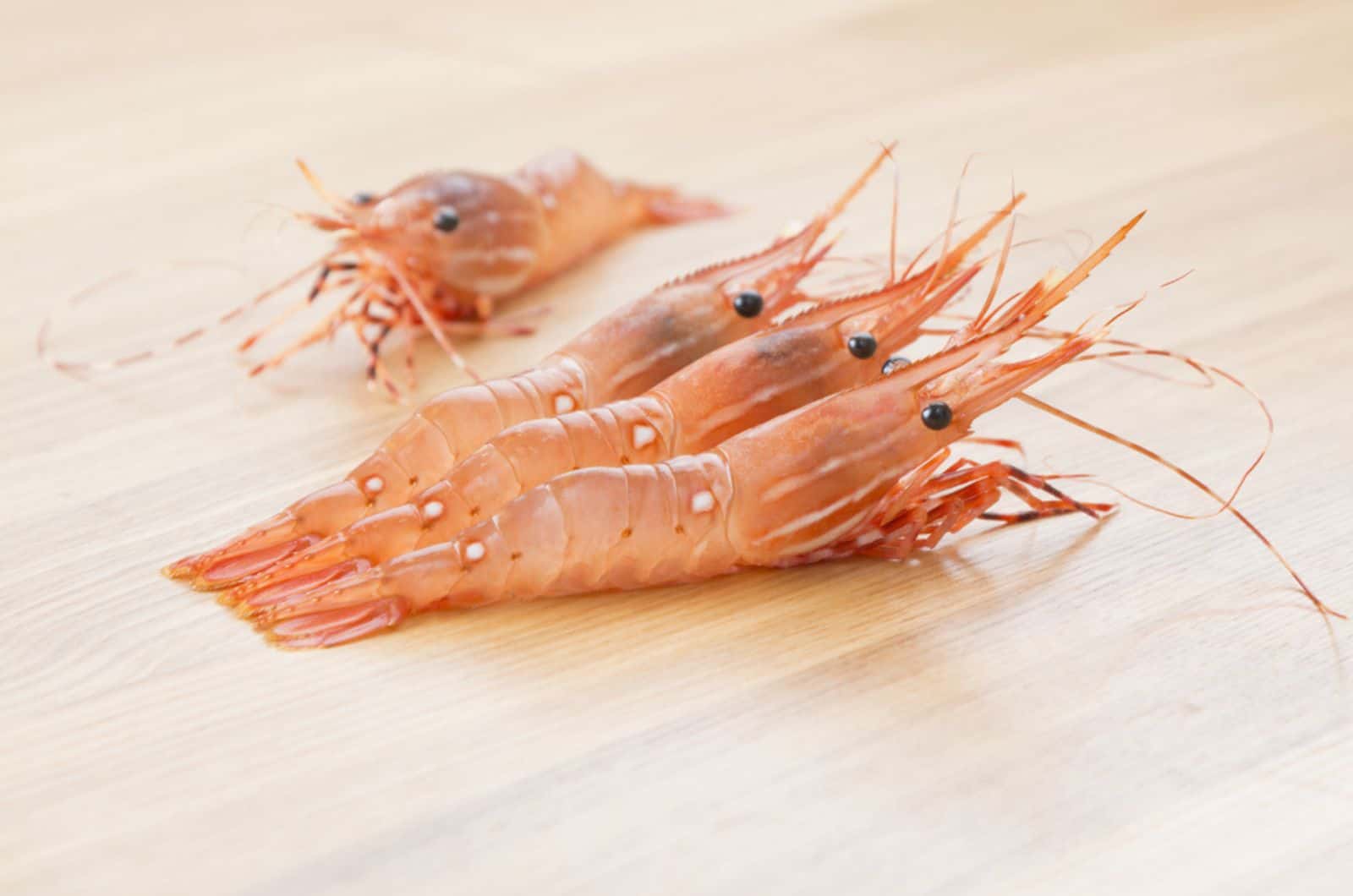 Freezer-burned shrimp are still great for cooking because they have the same taste and appearance as fresh shrimp. Nevertheless, the shrimp will become tough and rubbery if it is not thawed properly. One way to thaw the shrimp is to put them in a bowl of cold water.

One of the most noticeable changes in shrimp that have been freezer burned is that they can become drier due to a lack of moisture. This makes it tougher to chew than usual, but there are a few things you can try to help out, like adding some herbs, salt, and lemon.

You should avoid cooking them to eat on their own, as the changes present may be unpleasant. However, you can use them in many other dishes, such as pasta, salads, and more. This will mask these issues and make them completely edible again.

So, use your shrimps with white spots for:

Can You Eat Shrimp With White Spots?

Yes, shrimp can be eaten with white spots. However, it is important to note that the spots are often a sign of parasites or viruses.

The white spots virus is a viral disease that can cause white spots on the shrimp’s flesh. The virus is not known to cause any harm to humans, but it can make a shrimp look unappetizing.

This is because the virus does not affect the taste or texture of the shrimp’s flesh. It does not cause any harm to humans, so you can enjoy your favorite dish without worrying about its safety.

Some people think that shrimp with white spots are not safe to eat because they may contain toxins. However, this is not true.

Can Shrimps Get White Spot? 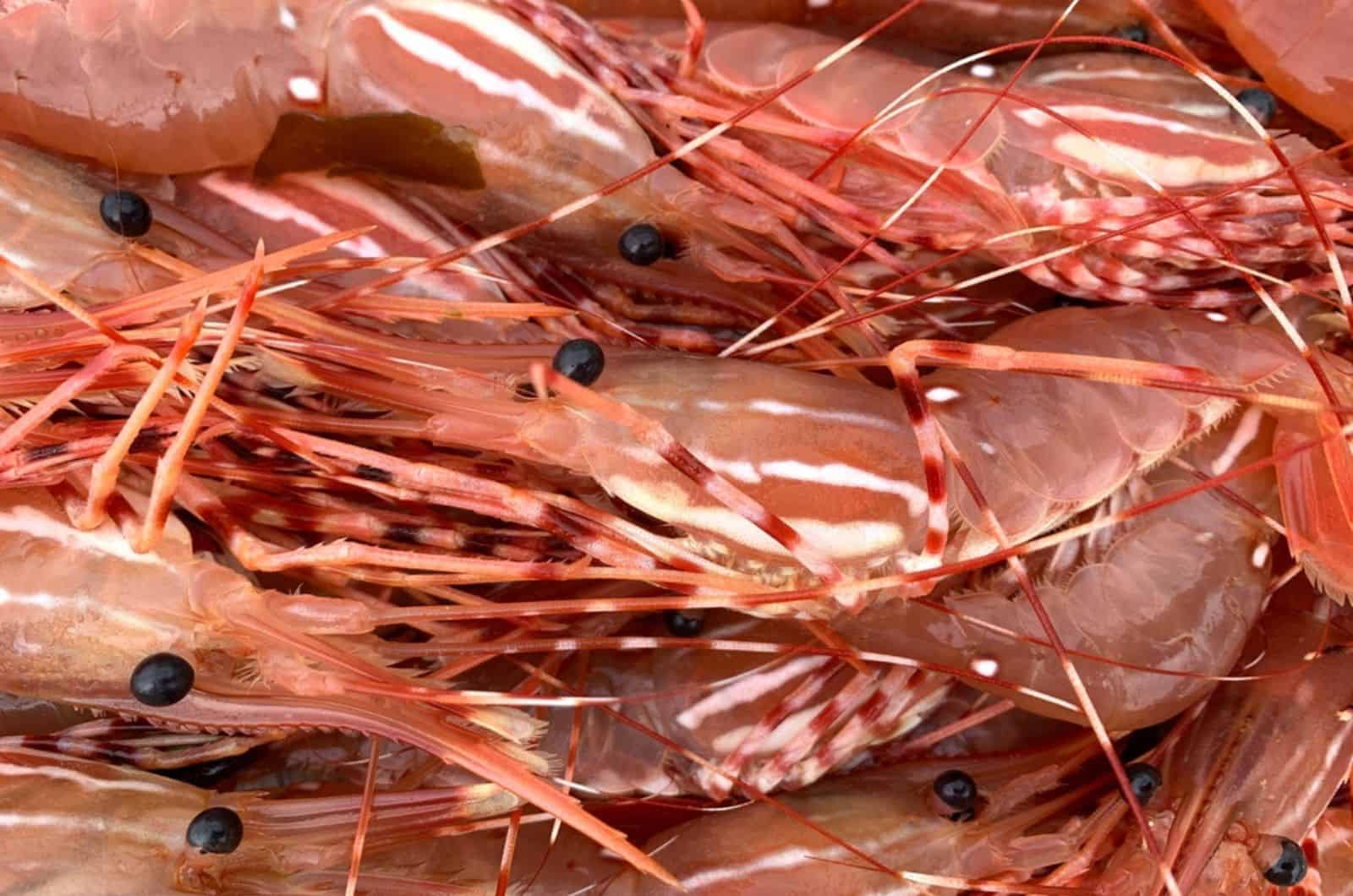 Yes, shrimps can get the white spot virus. It is a virus that affects shrimp and causes white spots on their bodies. It is also known to cause shrimp to die, but humans can still eat the infected shrimp.

Shrimps are susceptible to the white spot virus, which is a type of viral disease in crustaceans. It is a type of virus that affects the gills and digestive tract and causes death to the shrimp.

Risk factors for shrimp include water temperature, the presence of other types of bacteria in the water, and overcrowding. Shrimps can become infected by the WSSV if they are exposed to contaminated water or if they live with other shrimp that have been infected with the disease.

Mold on shrimp can be described as a fuzzy, white, powdery coating. It is harmful to eat and should be discarded, not eaten. If you do eat it, you will probably become nauseous or get food poisoning.

Mold on shrimp is not a color. It is a black, gelatinous substance that looks like tar and is covered in white fluff. Mold can often be found on the head of the shrimp, but it can also be found on other parts of the body.

If you find any kind of mold on your shrimp, you should throw it out because it could be hazardous to your health.

Molds are fungi that grow on the surface of plants, animals, and food. They can also form on food when it is exposed to high humidity or high temperatures. Mold is not the most appetizing sight for shrimp lovers.

Mold is a type of fungus that thrives on moisture and can be found in all types of food. It’s most common in seafood and fresh produce.

Say No To Food Poisoning

Fresh shrimp from the grocery store that has white spots are sure to have a disease. But you can still eat them. Also, white spots on shrimp that spent too long in the freezer are still edible as they’ve only experienced freezer burn.

Now you know your crustaceans. I am sure you will also know the difference between white spot disease and freeze burn after this guide has shown you how. Enjoy your thawed shrimp!