Salmon is a type of fish that is found in the Pacific and Atlantic Oceans. It is also found in the Great Lakes. Salmon are an important part of the food chain because they provide food for many animals, including humans.

The salmon meat industry has been growing rapidly in the past few years. The demand for salmon meat has increased due to its health benefits and its taste.

It’s no wonder humans want salmon, it’s delicious, and that’s why we want to keep it as fresh as possible. That is why you might ask: can you refreeze salmon?

Can You Refreeze Salmon At Home? 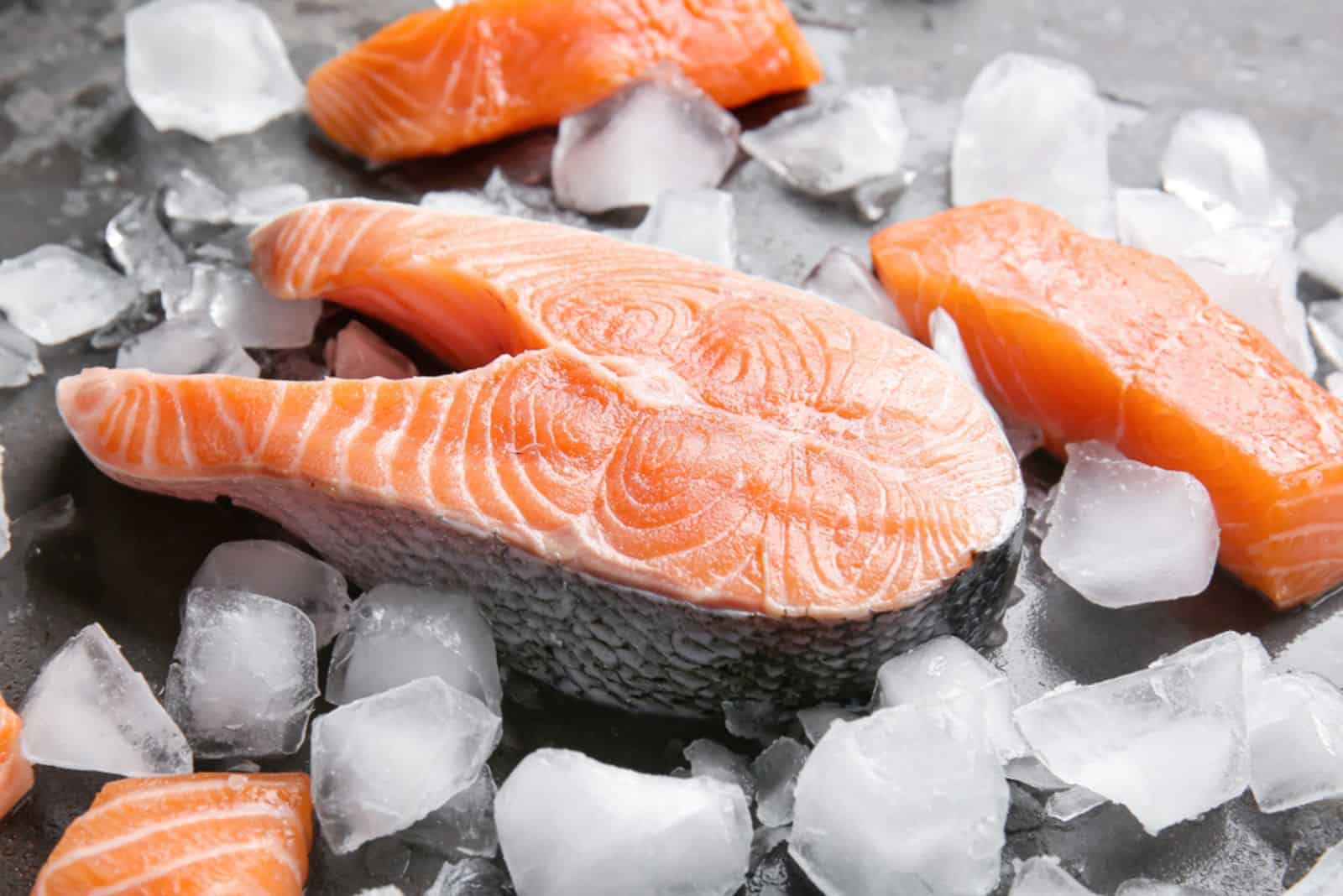 The answer to this question is yes. You can refreeze salmon at home. However, it is important to know that the quality of the fish will be affected by the freezing process.

Salmon is a popular fish that can be found in many grocery stores and restaurants. It is also a popular choice for people who want to cook at home. One of the most common questions about cooking salmon is whether or not it can be frozen after it has been cooked.

Another one of the most common questions about frozen fish is whether or not it can be refrozen after it has been thawed. The answer to this question is that you can refreeze salmon, but the quality and flavor of the fish will be compromised.

There are a lot of myths when it comes to food safety. One of the most common is that you can refreeze raw salmon that has been thawed.

But this is not true if your salmon has stayed out too long.

When this happens, some enzymes are activated, which causes fatty acids and other substances to deteriorate faster than they would if they were still frozen.

This means that when you refreeze your salmon, there will be noticeable differences in taste and texture between the fresh and thawed portions.

For practicality, you can place the salmon pieces in airtight containers, parchment paper, plastic wrap, vacuum-sealed freezer-safe bags, or aluminum foil, but make sure to draw the excess air out from around your refrozen salmon.

Why Can’t You Refreeze Thawed Salmon? 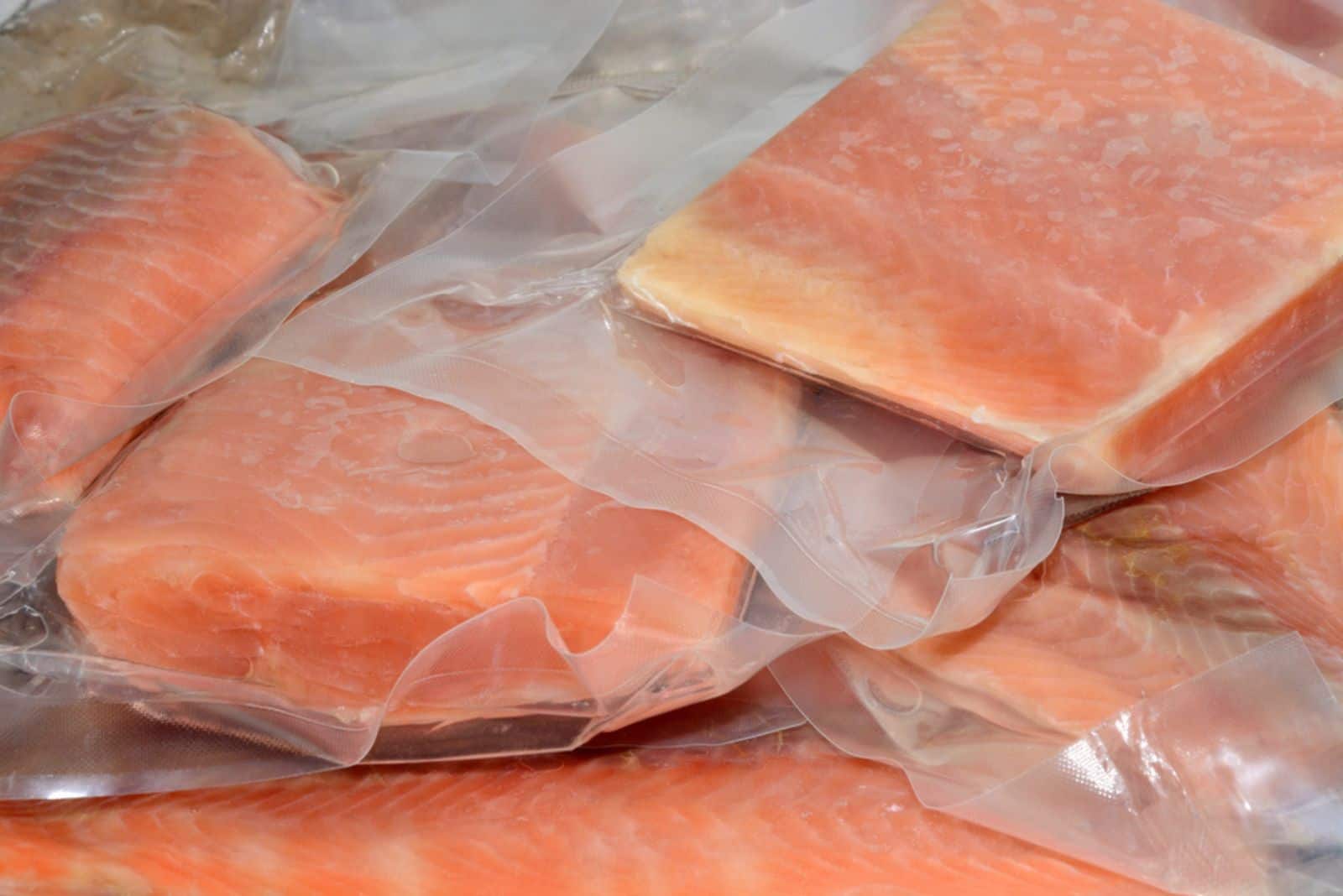 To answer the question of whether you can refreeze salmon, I think you can. But some people say you should not do so. When you defrost salmon filets for the first time and want to again freeze salmon, the USDA recommends storing them at low temperatures.

You should never refreeze raw salmon that has spent too long at room temperature because it will ruin the texture and taste of the fish and make it unsafe to eat.

Salmon contains a lot of water, which means that when you thaw it, this will be released in the fridge. It’s best to put this liquid into a container and then freeze it for later use in soups or stews.

Salmon is a delicious fish that can be found in many supermarkets and grocery stores. However, it is best to buy fresh salmon. There are many ways to prepare salmon, but the most popular way is to cook it in the oven.

Thawed fish, regardless of whether we are talking about smoked salmon, flash-frozen salmon, fillets with freezer burn, or just frozen food in general, should not be left out too long.

Another reason why one should not refreeze salmon is that bacteria may grow during the storage time due to temperature fluctuations in your freezer.

4 Dangers: Why Shouldn’t You Refreeze Fish? 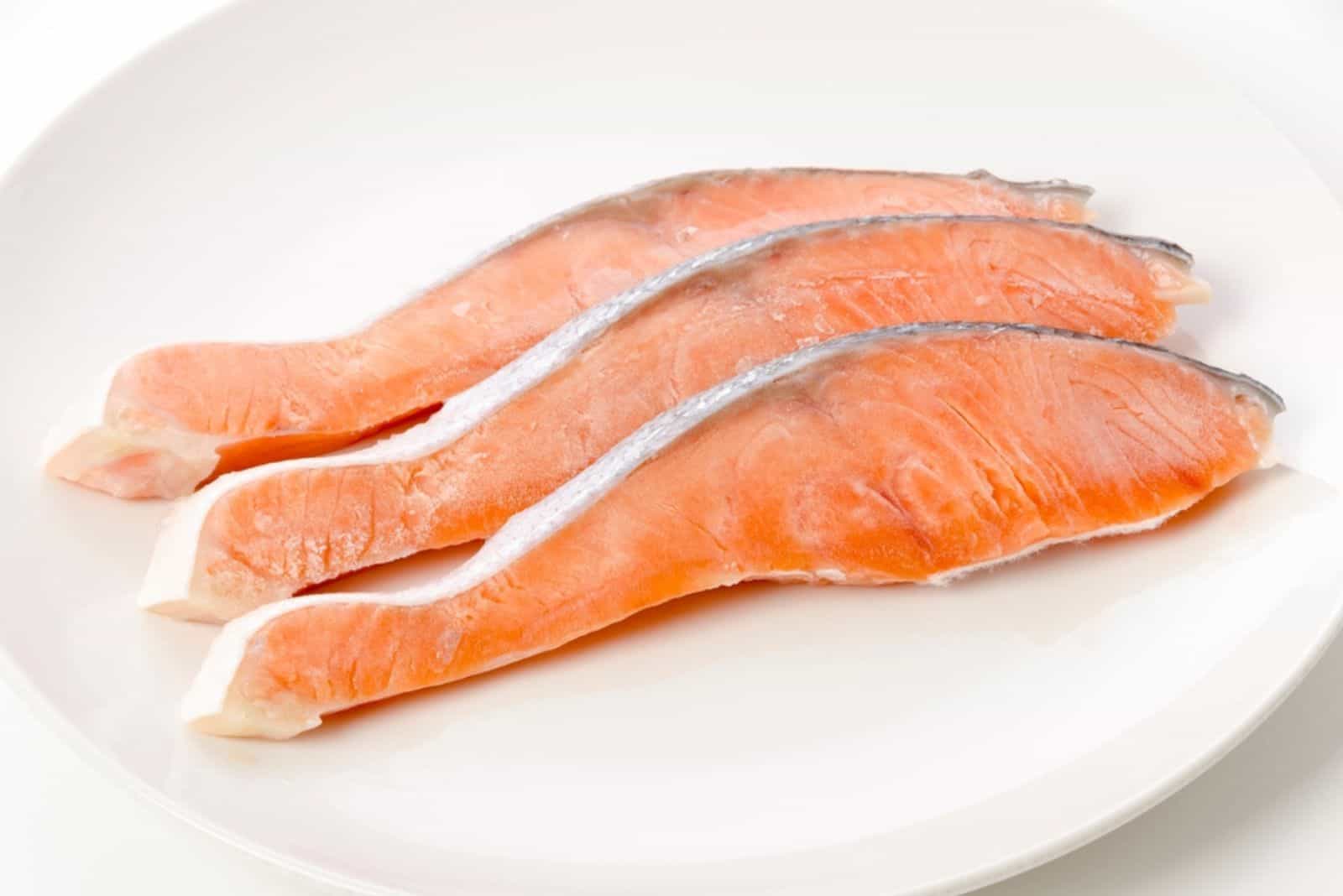 This section is about the dangers of refreezing fish. It outlines how the process of freezing and thawing can cause ice crystals to form in the fish, which can lead to a loss of flavor and texture.

• Water: The reason for this is that, when the fish thaws, the cells start to break down. This causes a lot of damage to the cell walls and exposes the protein to oxygen. This damages the cells even more and can lead to food poisoning.

• Bacteria: Refreezing can cause harmful bacteria to grow in the fish, which can lead to food poisoning. This article also mentions that it is not safe for pregnant women or people with weakened immune systems to eat frozen seafood because they are more susceptible to foodborne illnesses.

• Ice: Fish is a delicate protein that can be damaged by the freezing process. The water in the fish cells can actually turn into ice crystals which will rupture the cell walls and cause a loss of liquid from inside the cells.

• Texture loss: Freezing will result in a mushy texture and an off flavor when you try to cook it again. It is much better to cook your fish the day it is bought and eat it right away. The problem with refreezing fish is that when you thaw it, the flesh will become mushy and watery.

Defrosting Salmon And Fish: The Safest Way There Is 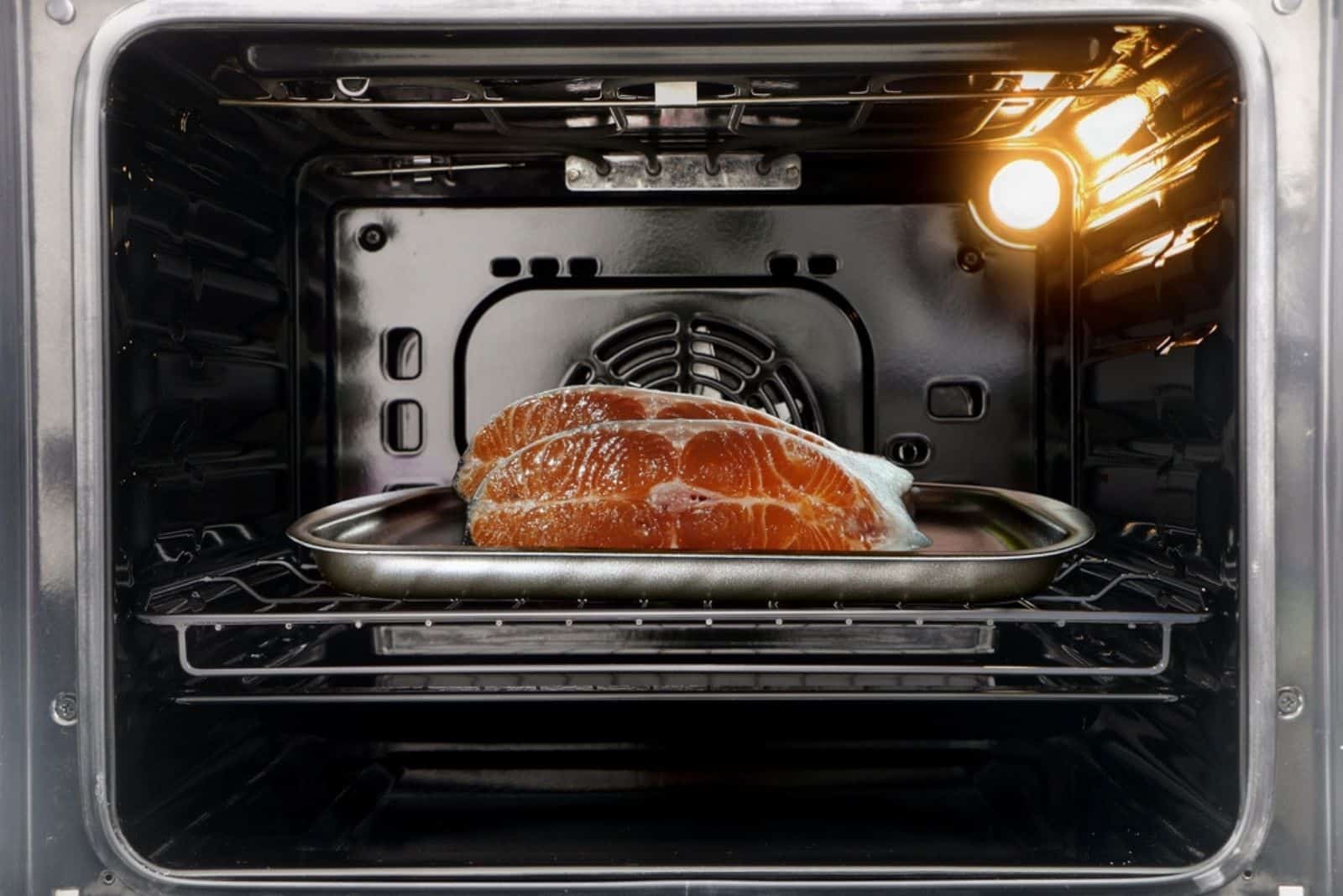 The main reason why people think that freezing fish is a bad idea is that they believe it will ruin the taste and texture of the flesh. However, this belief is not true at all because when you freeze food correctly, it does not affect its taste or texture in any way. Here is how to do it yourself:

Defrosting salmon and fish is one of the most common questions for people who love to cook. It can be a little bit tricky to do it in the right way. But, with these tips, you will be able to defrost your fish and salmon in a safe way that won’t make you sick.

Make sure that the fish or frozen salmon is wrapped loosely in paper towels, or place it on paper towels before putting it into the fridge. This will help keep any juices from running out of the package and contaminating other foods in your fridge.

Put the wrapped fish or salmon on a plate or shallow pan rather than directly on a shelf in your fridge. This will prevent any juices from dripping down onto other food items below it.

If you are a fan of seafood, you know that it is one of the most nutritious sources of protein. However, there are some cases when defrosting it can be tricky. I generally use a bowl of cold water.

The best way to defrost fish and salmon is to use the cold water method. This means that you will need to place your frozen fish in a container with cold water and change the water every 10 minutes.

You should also make sure that the internal temperature of the meat doesn’t exceed 40 degrees Fahrenheit because this will spoil your food.

The safest way to defrost fish and salmon is by using cold water. This method takes less time than the traditional method of defrosting in the fridge, which can take up to 24 hours.

Can I Refreeze Fish After Defrosting?

The answer to this question is not a simple yes or no. It depends on the type of fish and how it was defrosted. Generally, refreezing shrimp or prawns or just refreezing fish is a hassle, let alone the question, can you refreeze salmon?

The best way to ensure that your fish does not have an unpleasant taste is by immediately cooking it after it has been defrosted. This will also ensure that the texture and color of the fish remain the same.

How Many Times Can You Refreeze Raw Salmon? 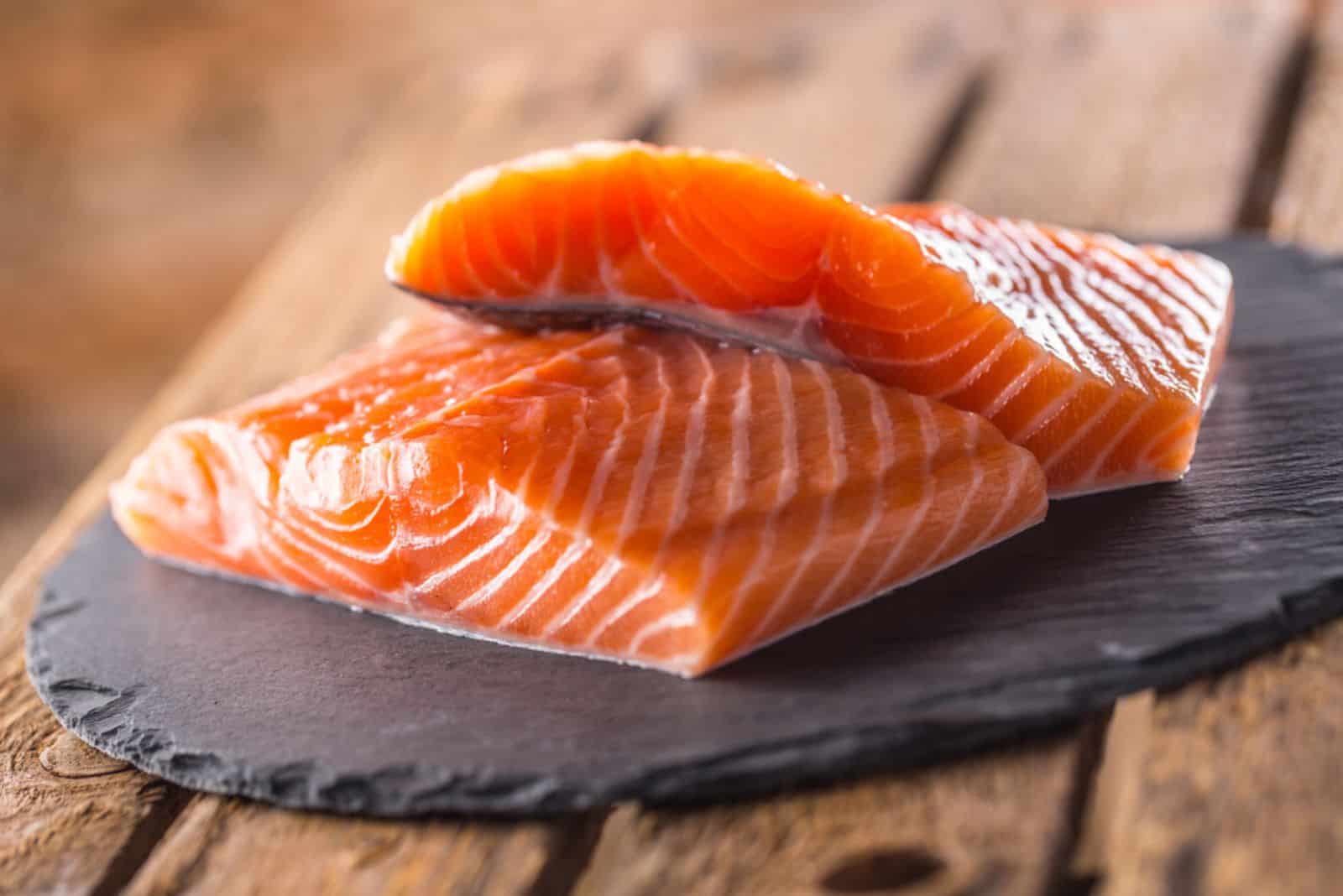 After thawing it, you can refreeze raw salmon up to three times. Of course, that is if you didn’t leave your salmon out in the open for too long before refreezing it.

Raw salmon is a food that can be frozen for up to eight months. The USDA recommends that you refreeze raw salmon only once, as it will not taste as good after the second time.

This section will explore the question of how many times you can refreeze raw salmon. This is a question that many people have asked themselves, and there are different answers.

The answer depends on the size of the cut, how you froze it, and how long it has been frozen.

The answer is not as simple as you may think. The freezer temperature, the thickness of the salmon, and how long it’s been in the freezer all play a role in how many times you can refreeze raw salmon.

The best way to tell if your salmon is still safe to eat is to look at it. If you notice any changes in color or texture, then it’s time to throw it away.

In general, it’s best to avoid refreezing any fish because it will lower the quality of the fish.

The conclusion of the article is that salmon meat is healthy and nutritious food that can be refrozen if you keep a close eye on it.

It has a lot of protein, omega-3 fatty acids, and other nutrients. That is why you need to know whether you can refreeze salmon if you’re a salmon lover.

4 Sure Signs You Are Dealing With Undercooked Salmon

[…] you are going to eat raw salmon, it is important that it is sushi-grade or frozen salmon. If you are cooking raw salmon, then make sure that it reaches a high internal […]