Are you not that big a fan of spicy food, but you love Mexican? I get you. A lot of people do. This smoky flavor chili pepper is the best option for you then because it gives Mexican dishes the earthy but sweet flavor you need when making Mexican food.

I love them because they have that little bit of zest that doesn’t take over your meal too much. Still, you can run out of them, especially when you’re living in the north or when they’re not in season. This is why most of us are looking for a substitute for ancho chiles.

Stay tuned to learn all about my favorite options when it comes to a substitute for dried ancho chiles, how each compliments your meal, what these peppers are, and a few questions you still might have.

15 Ideas For Your Substitute For Ancho Chiles

Here is a list of my favorite substitutes for ancho chiles: 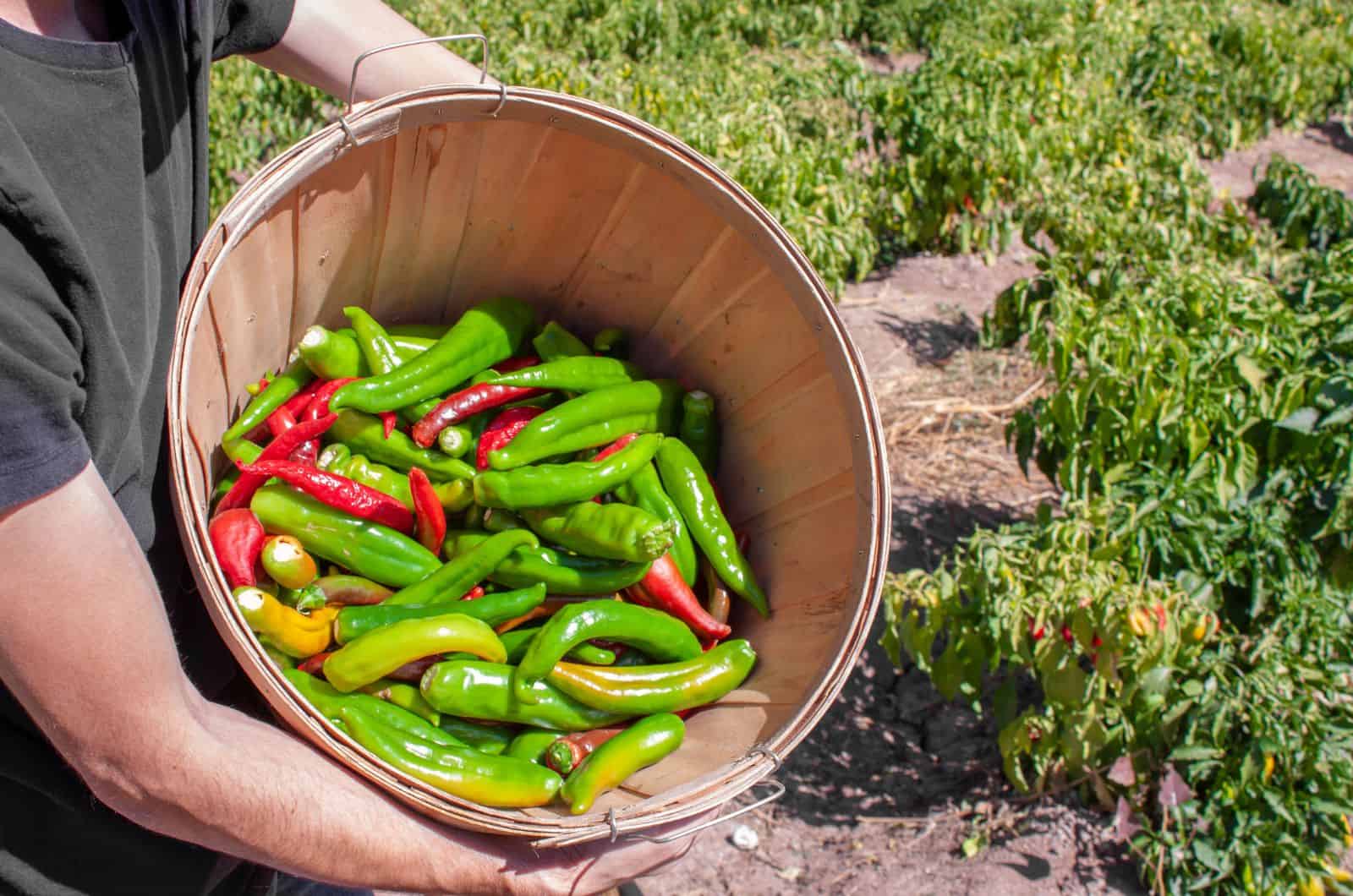 The New Mexico chile is the best dried ancho chili substitute because it has a similar flavor profile to the Aacho chile, just a bit spicier.

Anaheim chili peppers are similar to poblano peppers in color and flavor. They are also about the same size as an ancho chile, but they have thinner skin than an ancho chile, which means that they are easier to peel.

Now, this is an ancho chili substitute when it comes to looks. Pasilla chiles are a type of dried chile pepper that is often used as a substitute for ancho peppers. And they are dark brown in color and have a smoky flavor.

Pasilla chiles are often used in Mexican dishes like mole, enchiladas, and tamales. They can also be used to make sauces for beef or chicken dishes.

Another great substitute full of capsaicin is guajillo chiles. They are typically dark red in color and have a mild flavor.

Guajillo chiles can be substituted for ancho chiles in many recipes, but they do not have the same flavor profile as ancho chiles. They are more common in grocery stores, milder than ancho chiles, and have a sweeter flavor. 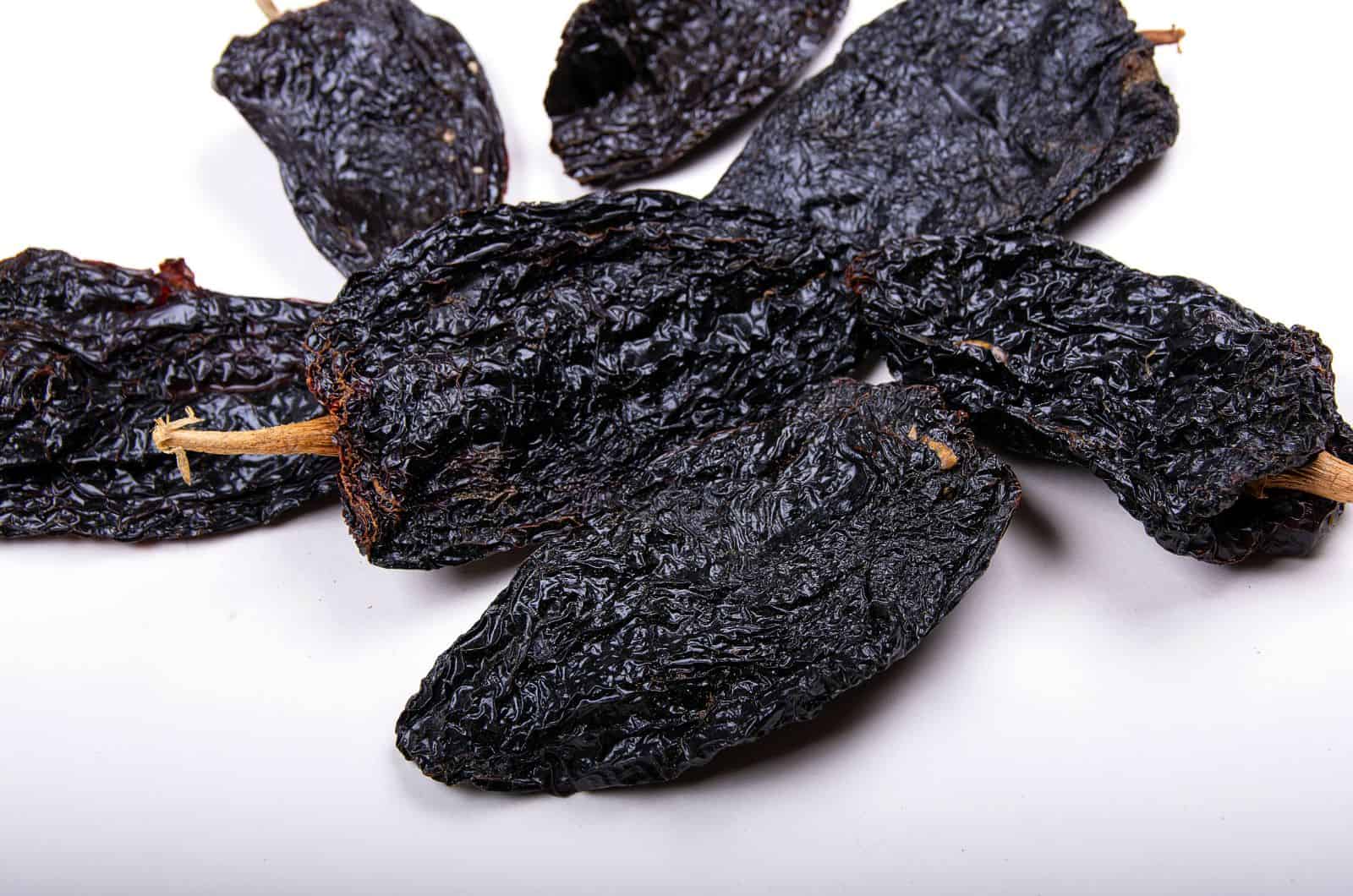 Mulato peppers are a type of dried chile pepper that is often used as a substitute for ancho peppers. They are dark brown in color and have a smoky flavor with undertones of mild heat and earthy flavor.

Mulato pepper powder, as well as the pepper itself, is often used in Mexican cuisine, especially in dishes like mole poblano, enchiladas, and tamales. They can also be used to make sauces for meats or vegetables.

Poblano chile is a great substitute for ancho chilies. They have a similar flavor and can be used in the same way.

A fresh poblano pepper is a mild chili pepper that is often used in Mexican cuisine. It has a slightly sweet flavor and is usually roasted or fried before being eaten.

Chili powder is a spice made from ground chili peppers. It is often used as a substitute for ancho chiles because it has similar flavor and heat levels.

In fact, one can use ancho chili peppers as a chili powder substitute as well. This makes it a great option as they are so similar, common in the supermarket, and come in powder form.

Chili flakes can be substituted for ancho chiles because they have similar flavors, and they are easier to find than ancho chiles.

Chili is a type of pepper, specifically spicy pepper. They are usually dried and ground into powder or flakes. The heat in chili powder can be adjusted by adding more or less of the flakes.

Chipotle peppers, when ground, make chipotle powder. This powder is made from ground and dried Chipotle chiles and has a smoky flavor.

The flavor of chipotle powder is smoky and slightly sweet with a little bit of heat. It is used to add a smoky flavor to soups, sauces, beans, stews, and more. 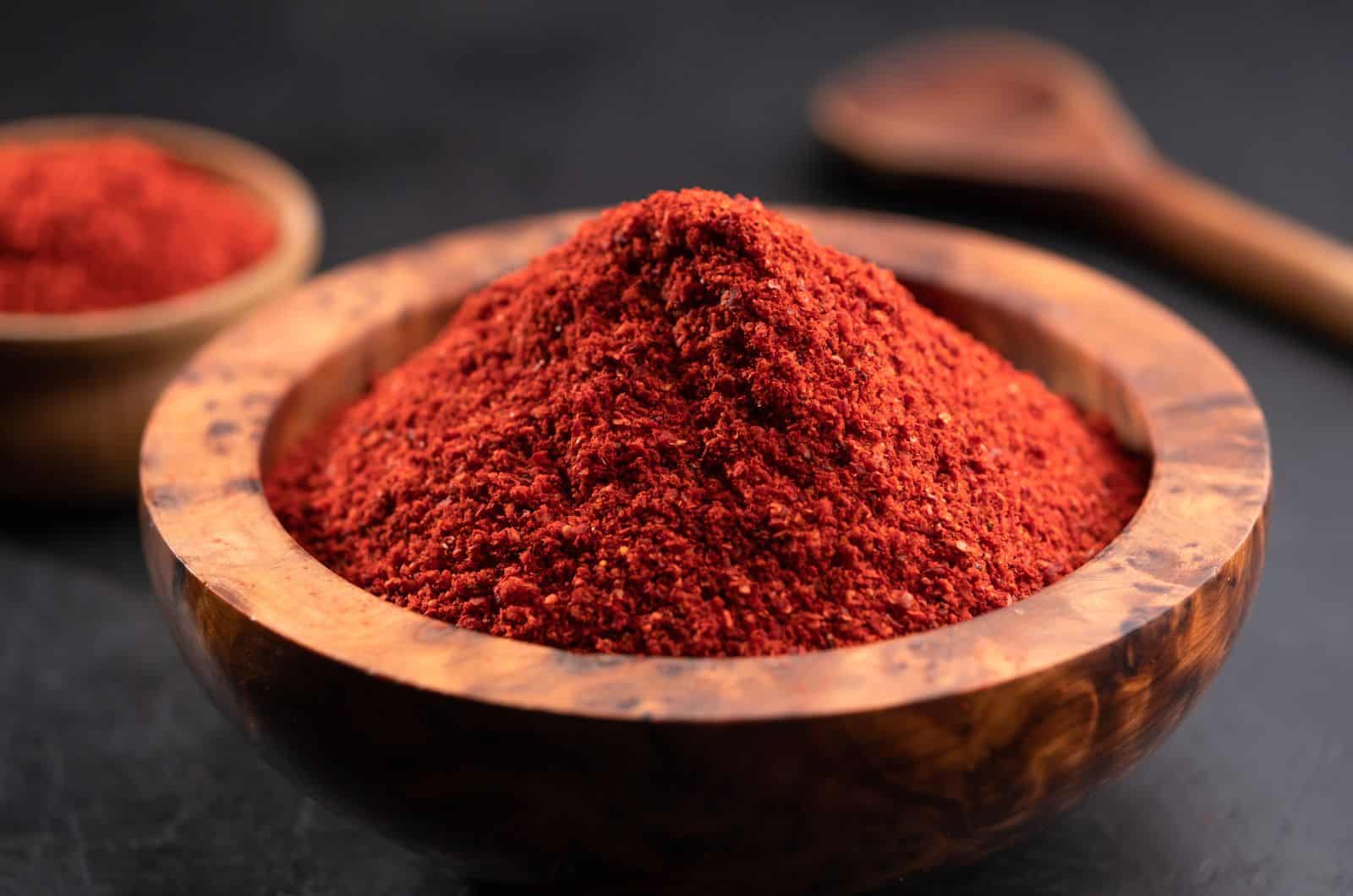 Another substitute for ancho chili is made from red pepper and is common in Mexican recipes. It is not as spicy but provides a similar flavor and color. Paprika powder is made from dried and ground sweet bell peppers, and it is used to add flavor to food.

Serrano peppers are one of the best substitutes for ancho chiles because they have a similar heat level and flavor. They also have a slightly sweet, fruity taste that is different from the ancho chiles’ earthy flavor. They can be used in any dish that calls for an ancho chile.

Cayenne pepper is not just for spicy dishes. Cayenne peppers are good substitutes for ancho chiles because they are both mild to medium in spiciness and have a fruity flavor. Cayenne peppers can be used for a variety of dishes, like fish tacos, vegetarian chili, or egg rolls.

The jalapeno pepper is one of the most commonly used chiles in Mexican cooking and can be found all over the world. They are usually quite mild, but some varieties can be quite hot.

Jalapeño peppers are often used as substitutes for ancho chiles because they are both mild and have similar flavors. 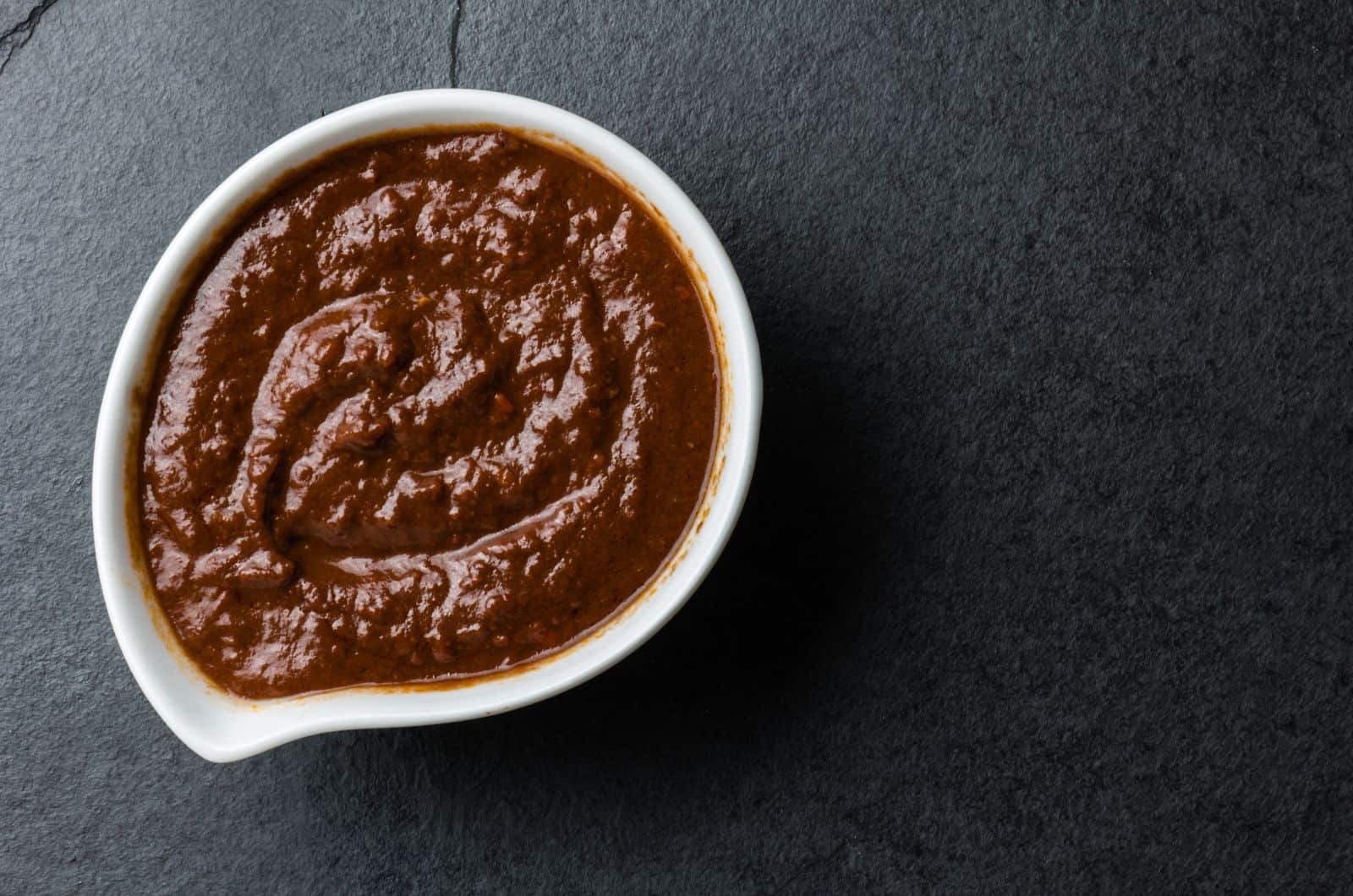 Mole sauce is a spicy, rich, and dark Mexican sauce made with several ingredients such as chili peppers, tomatillos, cocoa powder, garlic cloves, and more. Mole sauce is a suitable substitute for ancho chiles as it is usually milder in flavor and can be used in a variety of recipes.

What Is An Ancho Chile?

The word “ancho” means wide or broad in Spanish and refers to the shape of the pepper. Ancho peppers have a deep flavor that is often described as earthy or smoky with hints of raisins and chocolate.

Ancho chiles are dried, smoked, and ground poblano peppers. They are a staple in Mexican cuisine.

The ancho pepper is one of the most popular varieties of dried peppers used in Mexican cooking because it has a deep flavor that is often described as earthy or smoky with hints of raisins.

They are milder than jalapeño or serrano peppers. The ancho chile is a very versatile ingredient. It can be used for soups, sauces, stews, and much more.

They have a mild, sweet flavor and are dark red or black in color. They can be found in both whole and ground form and can be used as a substitute for any other type of dried pepper.

In Mexico, they are often used as a base for sauces like mole or guajillo sauce, which are typically made with chili peppers that have more heat than ancho chiles.

Ancho chiles can also be roasted to create the spice called ancho chile powder. This spice is often used to add depth of flavor to beans or rice dishes.

Is Ancho Chile Pepper The Same As Chili Powder?

The two are not the same because ancho chile peppers are dried and smoked, while chili powder is a spice mix that includes cumin, garlic powder, paprika, oregano, and other spices.

Ancho chile pepper is a dried, smoked, and ground poblano pepper. It is often used in Mexican cuisine. Chili powder is a spice mix that includes cumin, garlic powder, paprika, oregano, and other spices. 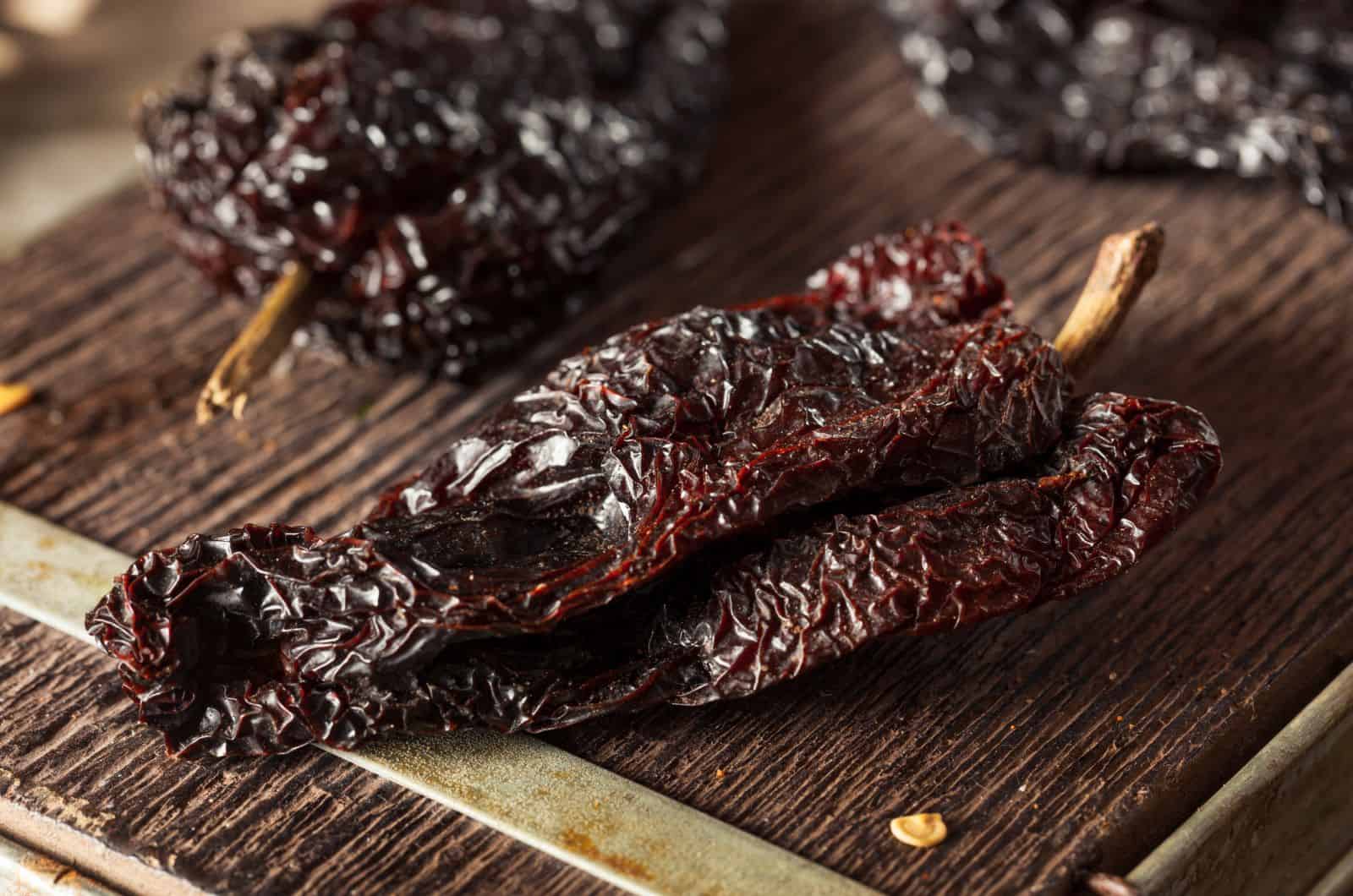 Dried ancho chiles are a popular ingredient in Mexican dishes. But they can be hard to find depending on where you live. So, what is the best substitute for dried ancho chiles?

I have found that dried New Mexico chiles are the best substitute for dried ancho chiles. They have a similar flavor profile to the ancho chile but with a little more heat.

Regardless of your choice when it comes to the best substitute for ancho chiles, the main thing is that you now know what sets this dried pepper apart and what good substitutes there are. Happy cooking!

Get To Know The Kikurage Mushroom (Recipes, Benefits, About)

Massaman Curry Vs Panang Curry: Battle Of The Giants

[…] Ancho chile peppers are also in the elite group of Mexican most precious peppers, the so-called “Holy Trinity” group. This, of course, tells us that this type of pepper also contains a certain quality and that it can serve as a guajillo pepper substitute. […]

What To Substitute For Sweet Chili Sauce: 11 Ideal Options

[…] sauce can be made from ancho chiles, Cajun peppers, chili paste, red chili peppers, and […]