So considering this, it is not a surprise that I often hear the question: what are the differences between chili flakes vs red pepper flakes? There are differences and I am here to reveal them to you and give you a little information that will help you to understand them better.

Some say that the main difference is in their composition, i.e. the ingredients that they are made from. Others say that it is about taste. But it is a bit more complex than that and it needs to be analyzed a little bit deeper in order for you to understand what is going on.

But we won’t idle anymore, let’s see what the differences are between these two flakes. 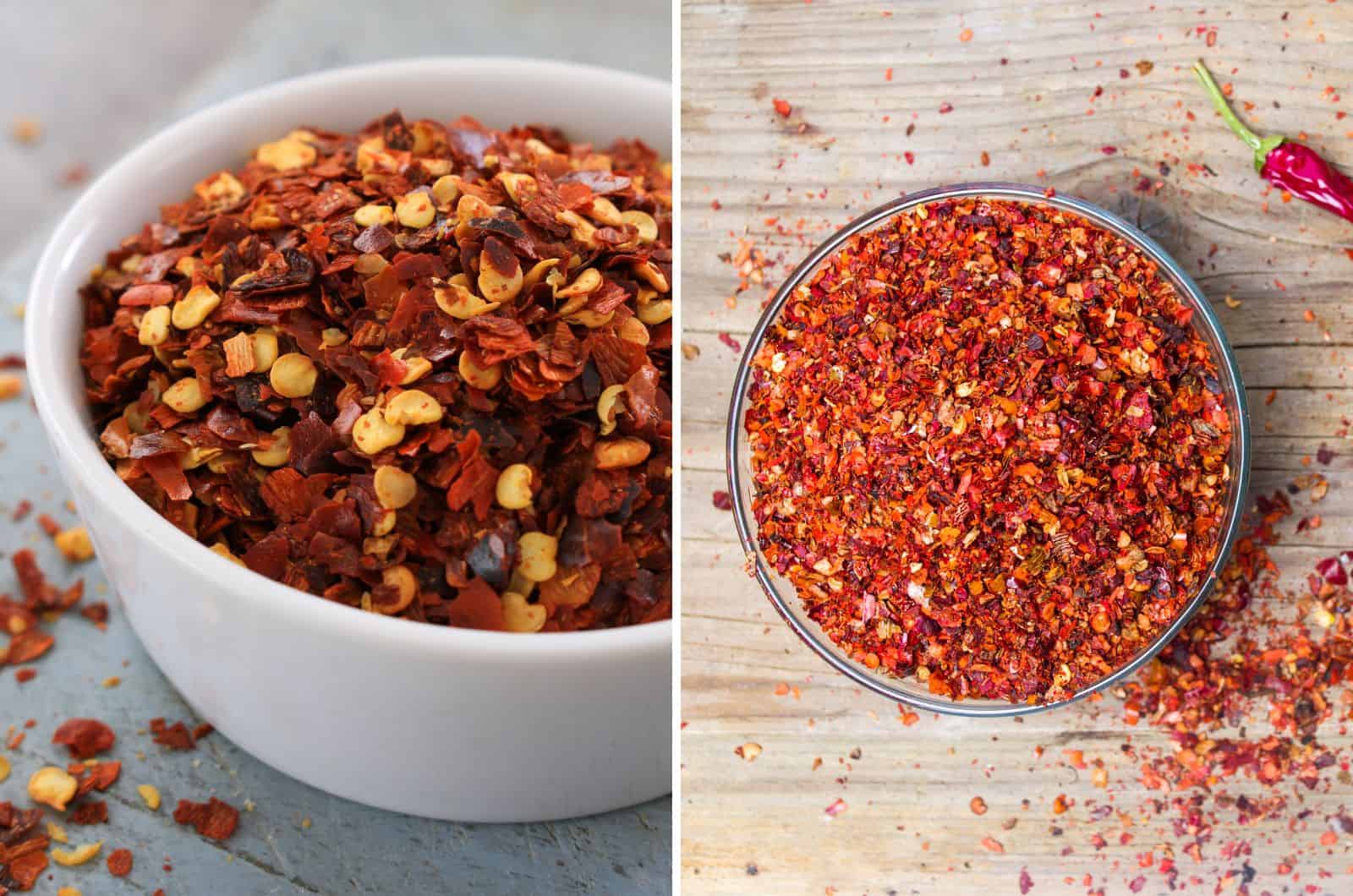 I divided the chili flakes vs red pepper flakes comparison into 4 basic categories in order to present their differences to you in the best possible way.

So, first is a general chili flakes vs red pepper flakes comparison as an introduction to this specific topic. I am going to say a few words about both types of flakes in order for you to better understand them and their main differences.

First, chili flakes are made of one type of pepper only, and that one pepper is the main creator of the composition. Of course, there are a wide variety of peppers when it comes to the type of chili pepper that is used to make chili flakes.

There are also some other types worth mentioning like Korean chili flakes or Gochugaru, Thai chili flakes, and other condiments. The type of pepper that you will use depends on your preferences.

The second category of chili flakes vs red pepper flakes comparison is their appearance. There are some differences in appearance between these two.

First, chili flakes have finer textures than red pepper flakes, but the main difference is in their colors. The color of chili flakes depends on the pepper that is used to make those flakes.

When it comes to taste, it is a bit of a complicated story in terms of chili flakes. The reason is the variety of peppers that chili flakes are made of.

Chipotles have a smoky flavor with a sweet aftertaste. Aleppo peppers possess an earthy taste that is similar to the taste of cumin.

Urfa Biber pepper is spicy, salty, and slightly sour. So, as you can see, there are a lot of tastes that chili flakes can provide based, of course, on the type of pepper that they are made of.

Red pepper flakes, on the other hand, have a more complex flavor because they are made from a mix of peppers. Their complex composition has a large influence on the taste and the heat level of flakes.

One thing is absolutely sure. Red pepper flakes add a lot more heat to the dishes due to the heat level which can vary from 15000 to 30000 Scoville Heat Units (SHU).

I am sure that this is the part of the chili flakes vs red pepper flakes comparison that most of you home cooks have been waiting for, and that is very logical since the most important thing, in the end, is your kitchen and your dishes to which you will add one of these spices.

Some people also add them to salad dressings, but much of this depends on your preferences so, in the end, it is up to you to decide.

Red pepper flakes are very versatile when it comes to culinary uses. They can be added to almost any type of dish.

They are mostly used in savory dishes some of which include chowders, pizza sauces, spaghetti sauce, soups, and sausages. Red pepper flakes are also widely used in Italian cooking as aromatic in the way that is added to a pan of hot oil with some onions and garlic powder.

Can You Substitute Red Pepper Flakes For Chili Flakes? 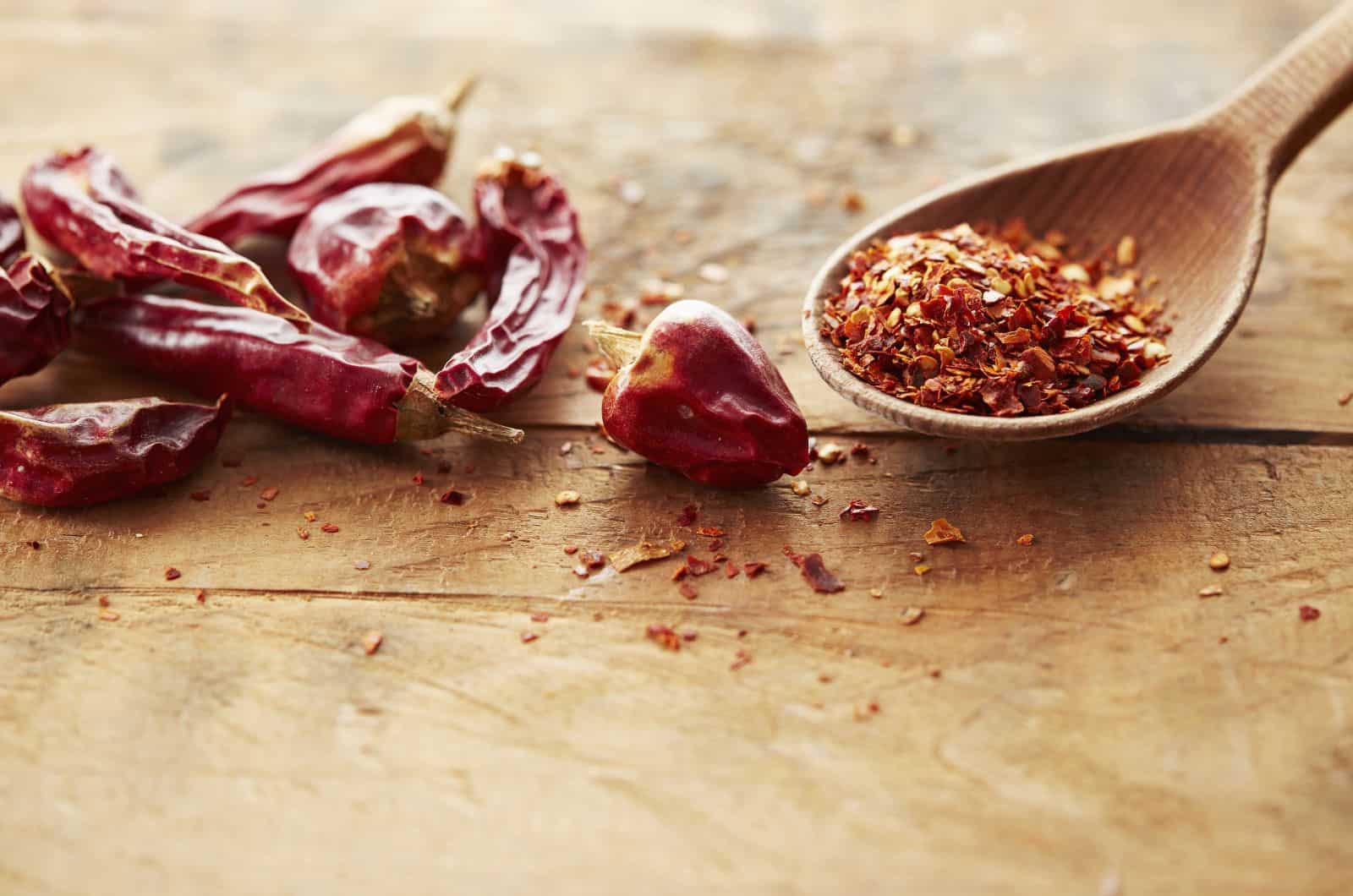 Yes, of course! You can substitute red pepper flakes for chili flakes.

One of the best chili flake substitutes for red pepper flakes is DIY chili flakes with dry chilies which are obtained by drying and dehydrating and have a shelf life of at least 12 months. You can buy these chili flakes in any grocery store or supermarket.

What Can I Substitute For Chili Flakes?

The absolute best substitute is a cayenne powder made out of cayenne peppers. It is very easy to find and it can add flavor to dishes just as well as chili flakes can. But cayenne can also be much, much hotter than chili flakes because its heat levels range from 30000 to 50000 Scoville Heat Units.

What Is The Difference Between Chili Flakes And Chili Powder?

On the other hand, chili powder is a seasoning or a mixture of spices that contain ground hot pepper that can be mixed with other ingredients such as cumin, oregano, and onion or garlic powder.

Chili powder is a great substitute for popular cajun seasoning and many others as well.

Another important difference is their interaction with food. Chili flakes have a large crushed profile and they tend to lay atop a dish. So, if you accidentally add it, you can easily remove it because it doesn’t infuse into the dish.

On the other hand, Chili powder infuses into a dish more completely and it can also give the sense that it is hotter than chili flakes.

What Are The Health Benefits Of Chili Flakes?

Some of the most important health benefits of chili flakes include the prevention of some types of cancer like prostate cancer, boosting metabolism, burning calories, fighting oxidative stress, and helping with digestive issues, pain, and inflammation.

I will also add that they are excellent appetite suppressants, so if you are on a diet, it is a good thing to eat.

Chili peppers have these health benefits due to their high level of nutrients like capsaicin, lots of antioxidants, and vitamins A, C, B6, E, and some important minerals like magnesium, potassium, and iron. 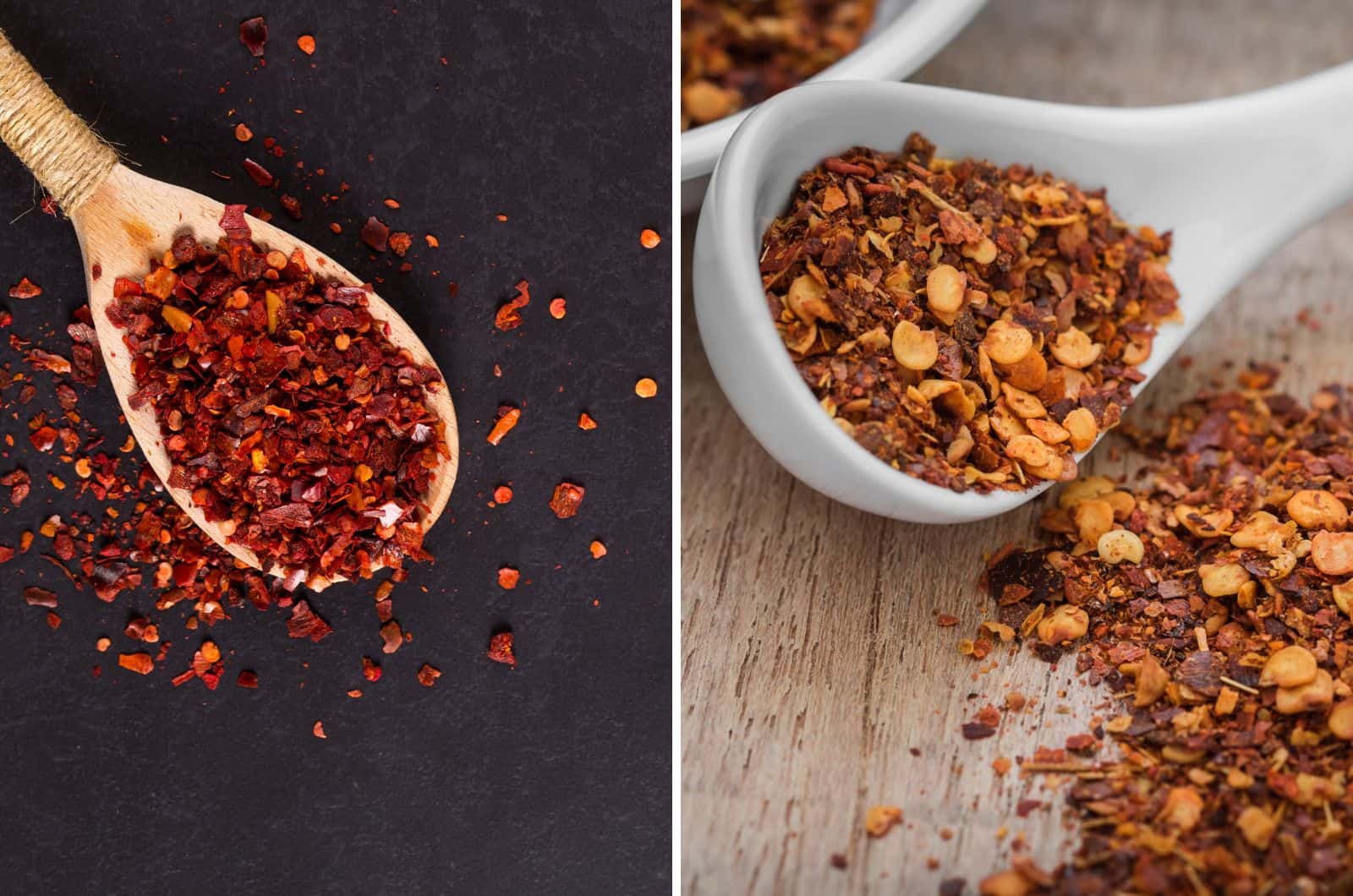 Although very similar, these two spices have enough differences to be able to make a chili flakes vs red pepper flakes comparison. A lot of ordinary people, who are not into spicy foods, don’t even know that these two condiments are not the same.

That same mistake is also made by many others that think that they know everything about Mexican cuisine.

But, after reading this article, I am sure that you won’t make that mistake again and you will know exactly what are chili flakes and what are red pepper flakes.

Aiden is our master chef, and he says that food is a way of life. He is a true WHISKtaker! After completing three years of cooking school, he followed his career path as a qualified chef. Luckily for us, his focus has shifted now onto sharing his expertise with the world. He writes about his secret recipes and tips, and happily answers all of your questions.

She is just here for the food! Zoey’s love for food is why she went into being a nutritionist. After finishing her dietetics education, she started her own private practice as a holistic nutritionist. Now, she shares her favorite food ideas, knows how to substitute food, and compares it while reminding you to eat your veggies.