Many people enjoy Mexican cuisine as it’s rich with flavors and often gives us the most soul-comforting food there is. Peppers are usually a star ingredient of many Mexican dishes and their popularity has spread all over the world. Some of the most famous peppers are pasilla peppers and poblano peppers.

So let’s compare pasilla and poblano to see if there is a difference between these two famous chili peppers.

In this article, I will give you all the information you need to know about the differences between pasilla and poblano peppers, and give you answers to a few common questions about them.

But before we make a comparison between the two stars of Mexican cuisine let’s get to know them first.

What Are Pasilla Peppers?

It’s my pleasure to introduce you to the famous pasilla pepper.

On the other hand, chilaca pepper is a fresh form of pasilla chili pepper and, when in that form, it is called pasila bajio, Mexican negro or chile negro. Pasilla peppers get their name from the color they become as their color can vary from dark green to dark brown, even black.

What Are Poblano Peppers?

I am happy to introduce another star of Mexican cuisine to your kitchen. Ladies and gentleman, here comes the poblano pepper!

Roasted or fried, stuffed or alone, stir-fried or deep-fried, poblano pepper will make everyone’s meal delicious and savory. It got its name from the name of the city Puebla in Mexico where it grows. This is a widely known Mexican chili pepper with its other name being puebla Mexico.

Fresh poblano peppers are the ones you can enjoy eating fresh as their skin will not peel when consumed in that form.

If you decide to eat them roasted or baked, you will want to get rid of the skin since it will not stimulate your appetite and it tastes very bland.

Dried poblano pepper is known as ancho chili. This pepper is widely used in Mexican and Tex-Mex cuisine as it is a mild chili pepper and is a good option for those who don’t like their meals too spicy.

Anchos are not extremely spicy as they don’t contain too much capsicum. Their spiciness level can vary from 1000 to 1500 SHU. 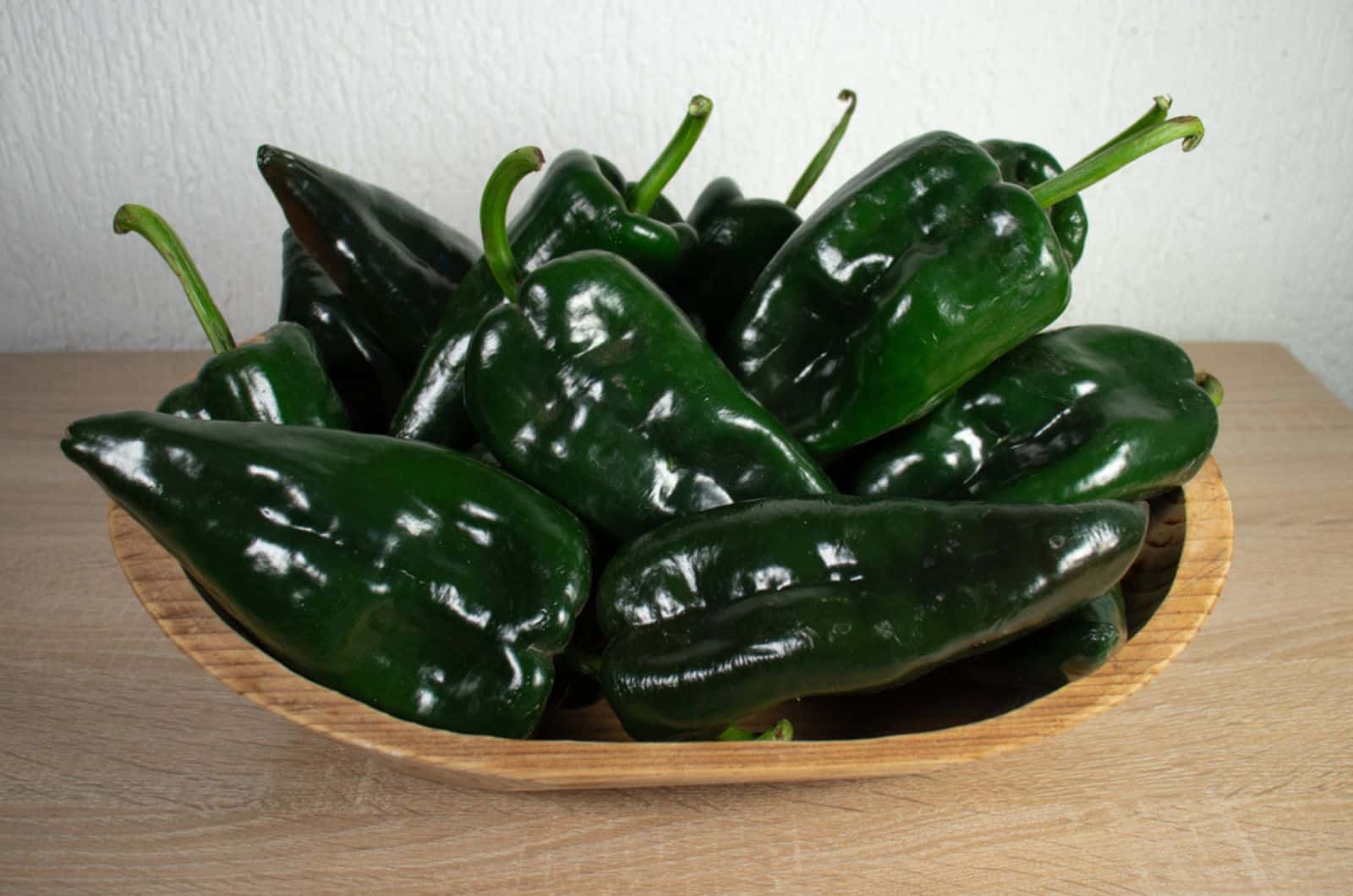 When you find these two peppers in a grocery store, the looks are the first thing you’ll notice. Now I don’t want to say you take looks to be everything, but you will see a difference lies there too. So hear me out.

This heart-shaped Mexican beauty is a perfect choice for stuffing with veggies, meats, rice or a combination of these foods. This is because poblano pepper has enough volume to sustain a decent filling.

The color is much darker too. It can vary from very dark green, brown to almost black. The name chile negro explains it all.

After you take a good look at these two peppers, you will want to know how spicy they really are. Their heat level, or spiciness, is also another difference between the two. So, what do you think? Pasilla vs poblano? Which one is spicier?

The heat level of poblano pepper ranges from 1000 to 1500 heat units on the Scoville scale. It’s not so hot, is it? If this is too mild for your taste, I have another one for you.

Pasilla pepper goes from 1000 to 2500 Scoville heat units. It is spicier than its pepper friend, but they both go great in dishes if you don’t like your meals to turn to a burning sensation on a plate.

Pasilla chili is a common substitute for jalapeno chili. This is because they have a similar taste but different spiciness. The hottest pasilla pepper is the mildest jalapeno. So if you do want to heat up your plate much more, opt for a jalapeno. 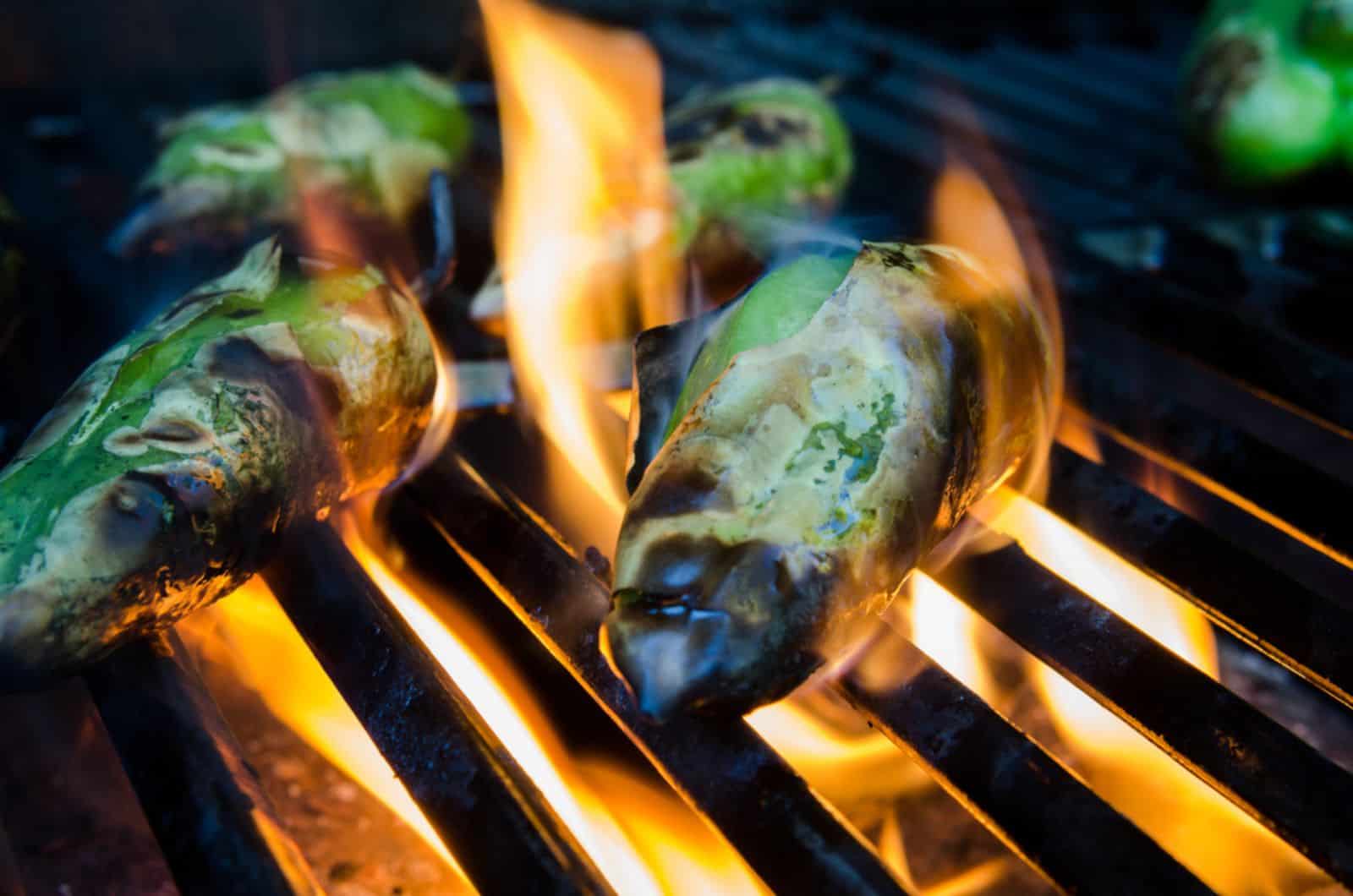 Ok, now that you know all about the appearance and spiciness of the pasilla vs poblano comparison, it’s time to turn to that which all of us foodies really value: the taste. So, let’s get to know their flavor profile.

When used as fresh peppers, poblano peppers are similar to bell peppers in taste. They just have more zest. This fresh chili becomes even milder in taste when cooked as it changes to a sweeter variant of flavor. The dried version of poblano peppers are called ancho and have an earthy and fruity flavor.

It is true that both kinds of peppers can be used in any recipe which includes chili peppers. But, the comparison between pasilla and poblano will still not reach its end.

Considering its shape and size, poblano pepper can be used in many dishes with some of them being: stuffed peppers or chiles rellenos, veggie poblano chilies cooked in a pot on a stove. They can be a great ingredient for a pesto and a solid part of a chicken salad.

Pasilla pepper, on the other hand, is not suitable for holding a filling so they cannot be stuffed in the way a poblano pepper can. This chili pepper is most often used in mole sauces, different kinds of meat or veggie soups, and as chili flakes.

If you have a recipe for enchiladas or a salsa dish, this pepper will aid your cooking mission too. Pasilla chili is often a part of another dish as it is just too rough to be consumed by itself.

Be it poblano or pasilla, the usage is very wide. Whichever you choose for making your meal, you will not be left disappointed.

Which Chili Is Spicier? Poblano Chili Or Pasilla Chili? 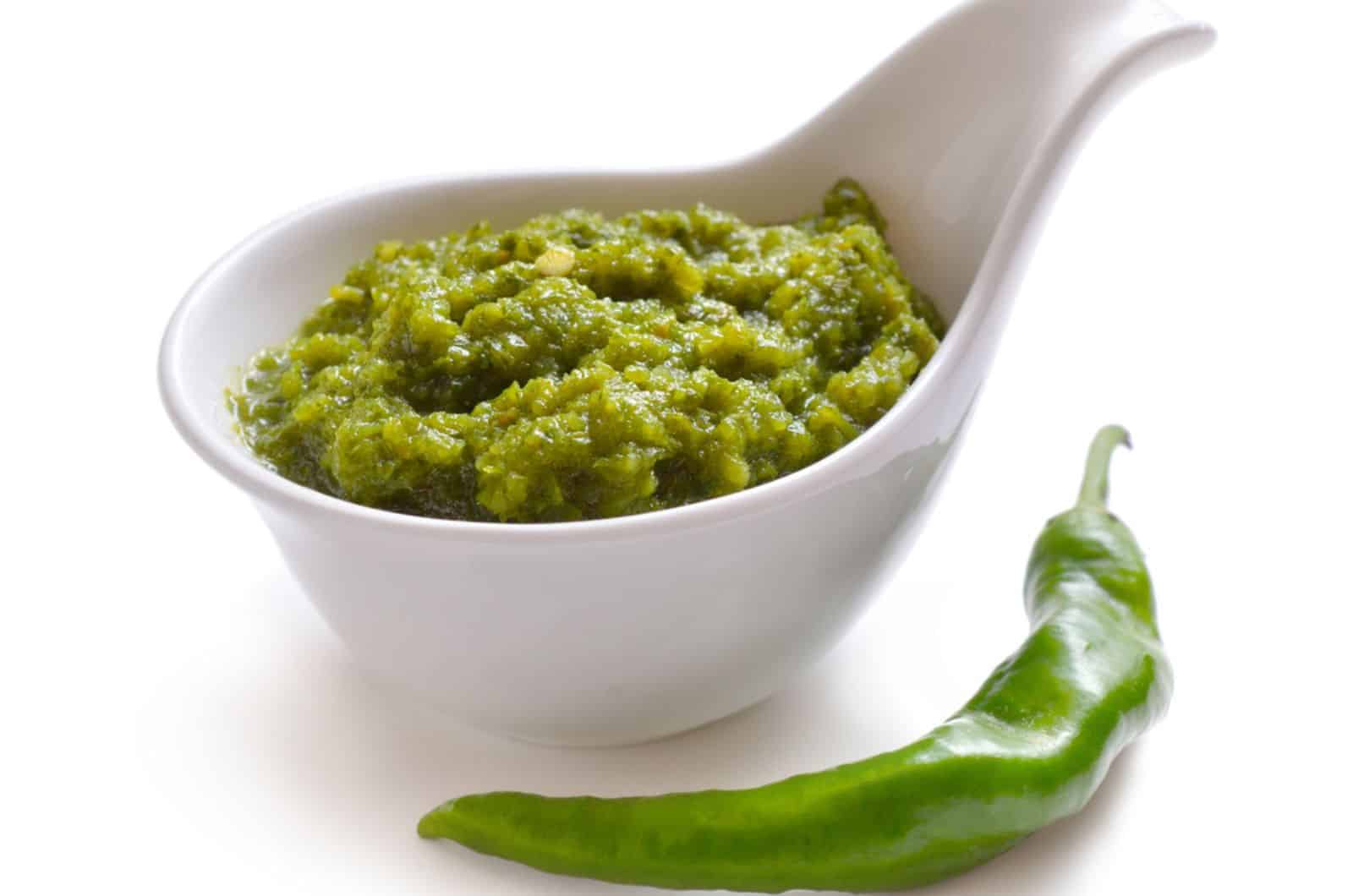 While they are quite similar in spiciness, there is a slight difference between the two. Pasilla chili is spicier as it ranges higher on the Scoville scale. It goes up to 2500 Scoville Heat Units.

Poblano chili is able to reach only 1500 Heat Units on the Scoville scale which makes it much more mild in its spiciness when we compare it to pasilla chili.

It is worth mentioning that both peppers are considered to have mild and/or moderate heat levels with pasilla being the hotter of the two.

This is also a unique characteristic of the two chili peppers and perhaps a similarity as well. Their subtle spiciness is the thing that makes them so favored amongst foodies around the world. Since neither of them is too spicy, it is suitable to become a part of many dishes.

Both poblano and pasilla chili can be a booster ingredient in a dish without compromising the original flavor that the chef wanted to go with.

Is There A Substitute For Poblano Chili ?

Yes, there is! Anaheim pepper is the pepper you will want to opt for if you’re in need of a mild spicy pepper and poblano pepper is nowhere to be found. Anaheim pepper is just as mild as poblano chili, though a few units higher as its heat goes up to 2500 SHU.

This is why you need to be aware of what chili you use to make sure it will not leave you surprised by its spiciness when substituting it for poblano pepper. Make sure to try it before you put it in your chili dish.

Can I Substitute Poblano Chili With Guajillo?

You can use guajillo peppers as a substitute for your poblano chili. But you will need to pay attention to the fact that guajillo is on the spicier side compared to poblano as their heat level goes from 2500 to 5000 heat units on the Scoville scale.

Generally, this chili looks glossy, smooth, and dark red on the outside, but it could hide a truly heated surprise inside.

Guajillo is a perfect ingredient in a Mexican guacamole dish, and we all like guacamole, don’t we?

Can I Substitute Poblano Peppers With Pasilla Peppers? 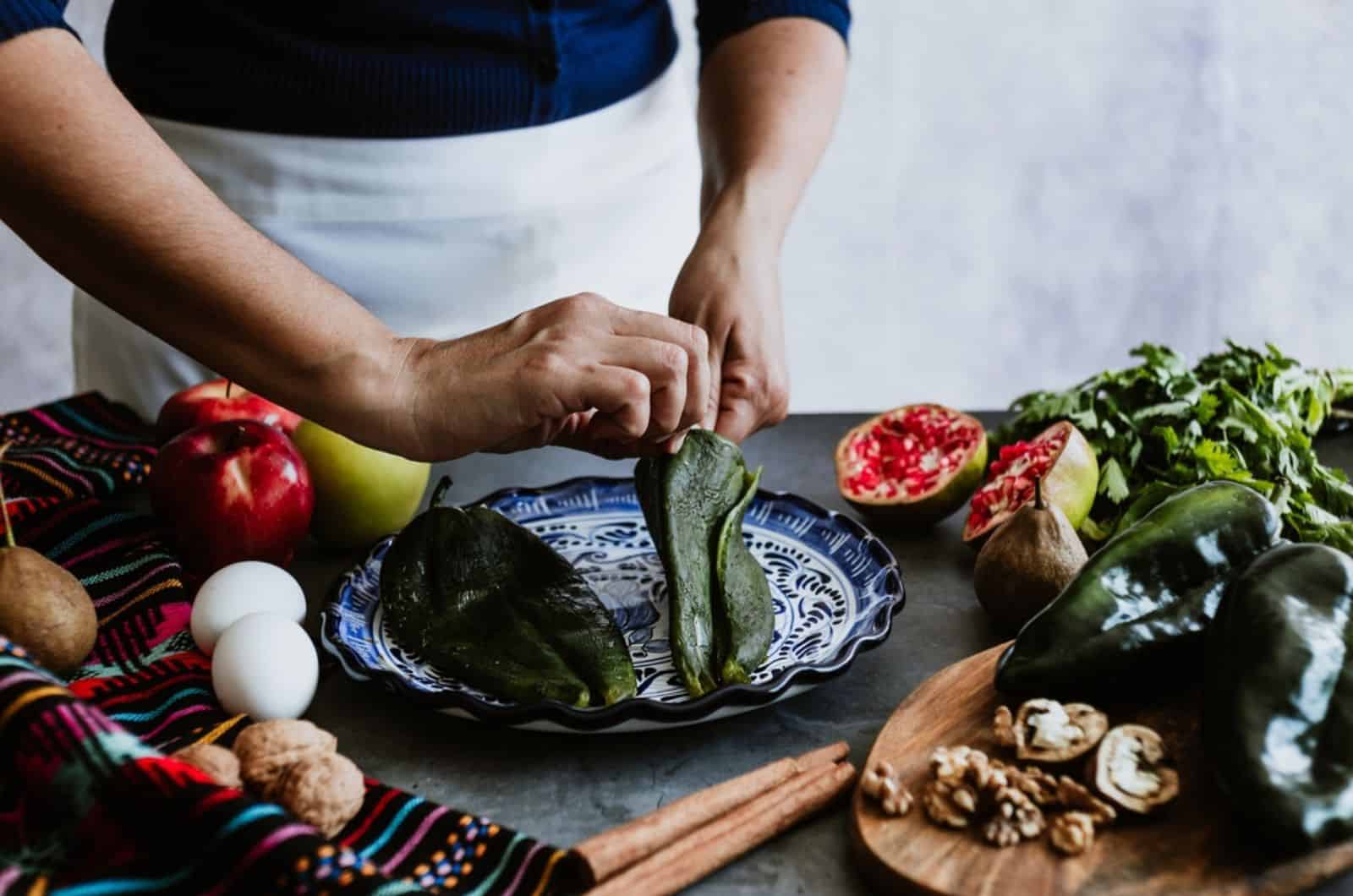 Yes, you can, but your food will not have the same flavor. This is because these two kinds of peppers have a different taste and will depend on whether you use fresh or dried versions of these peppers.

For instance, the dried version of poblano pepper (ancho chiles) tastes earthy and fruity but are much sweeter than pasilla peppers. Take this into consideration when thinking of substituting these two peppers.

Many Mexican food lovers ask this question as they sometimes cannot find one or another kind of pepper in their grocery stores. I hope that this answer helped to clear up your doubts.

Is There A “Holy Trinity Of Chili Peppers”?

Sounds unusual, I know. But, yes there is! The following three kinds of peppers are considered to form that holy trinity: ancho (or poblano dried chilies), pasilla peppers and guajillo peppers. This is because they are the main ingredient of many Mexican dishes with many of them being a variety of mole sauces and stews.

Poblano Vs Pasilla: Spice It Up!

Grocery stores all over the world offer a range of chili peppers and with pasilla and poblano being some of the most famous ones, it is natural to have the following question on your mind. Pasilla vs poblano: is there a difference?

So, now you know. You are ready to decide which one is going to be on your menu today. I hope this article helped you to clear up your queries and make a final decision.

Whichever you choose to use in your meal today, I can guarantee you will be able to enjoy its impeccable and unique flavor.

Now you can go ahead. Make your meal and spice it up with pasilla or poblano peppers.

Get To Know The Kikurage Mushroom (Recipes, Benefits, About)