Do you want to eat an Indian dish at your local Indian restaurant? Or can’t you figure out the difference between these two dishes your friends can’t stop talking about? You keep asking yourself: Is there a difference between butter chicken vs. tikka masala?

In this article, I will tell you all about both of these dishes, what each of them is, their similarities and differences, together with some questions you might still have. Enjoy! 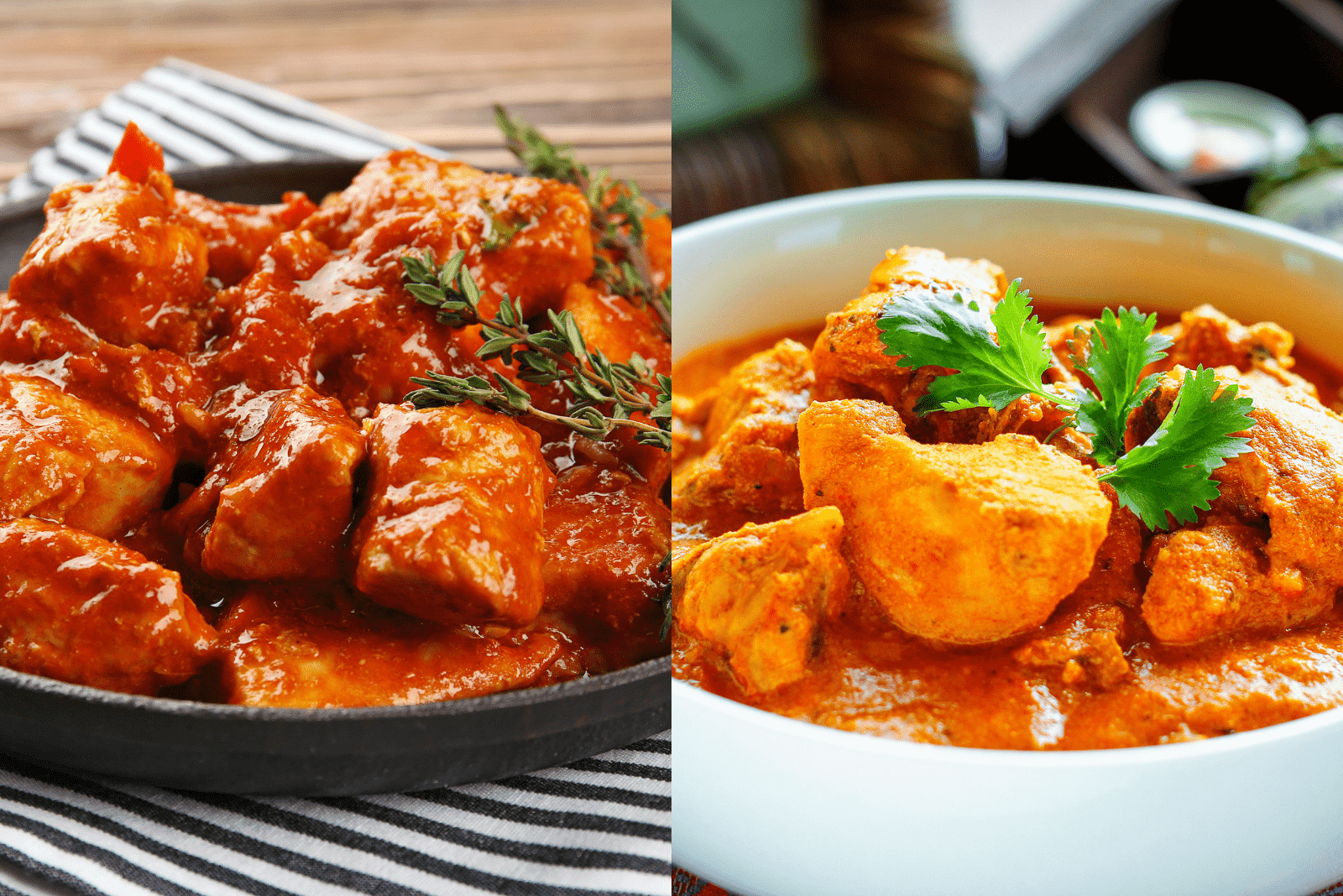 When it comes to butter chicken vs. chicken tikka masala, you have to choose your favorite.

Now, this is an authentic national dish from Delhi, also known as murgh makhani. Butter chicken is a dish that originated in the Indian subcontinent, and it is a rich, spicy curry made from chicken in a tomato-based sauce.

Butter chicken or murgh makhani is made from pieces of chicken marinated in spices and yogurt, cooked in butter or ghee, and simmered with tomatoes and onions.

The dish was first created by Kundan Lal Gujral, who ran the Moti Mahal restaurant in Old Delhi, India. The original recipe contained no butter or cream and was based on tandoori chicken cooked in a tomato-based sauce with spices like cumin, coriander, ginger, and garlic.

The tender chicken made this a popular dish for Punjabi immigrants to North America and has since become popular worldwide.

The marinade consists of chili powder, fenugreek, cooked chicken, heavy cream, ghee or butter, plain yogurt, and tomato gravy, making it a type of chicken curry and giving it a buttery taste.

Tikka masala is a dish from India that is traditionally made with chunks of meat, onion, garlic, ginger, and tomato puree. The sauce is typically spiced with garam masala, cayenne pepper, or paprika.

It is a curry dish that is made with a tomato-based sauce, onions, garlic, ginger, and spices. The sauce is typically spiced with cumin and coriander. Chefs used tandoori chicken as an ingredient to make it more flavorful and spicy.

The word “tikka” means “bits” in Hindi and Urdu. Masala refers to the spices used in the dish. It is a dish that originated in the UK. This curry is made with a tomato-based sauce, onions, garlic, ginger, and spices.

The dish was created by Bangladeshi chef Ali Ahmed Aslam, who was employed in restaurants in the UK in the 1970s. The chef used traditional cooking techniques to create dishes for British customers who wanted Indian food but didn’t know how to cook it themselves.

The ingredients in tikka masala include Indian curry, boneless pieces of chicken, turmeric, creamy tomato paste, basmati rice, roti, paneer, and cardamom. It is paired with naan flatbread and is a staple of westernized Indian cuisine.

What Is The Difference Between Butter Chicken And Tikka Masala? 7 Differences

So, where does the difference between butter chicken and chicken tikka masala lie? Sure, they are both chicken recipes, but there are a lot of differences between them. Here they are:

When it comes to butter chicken vs. tikka masala, the preparation method is the difference between these two. The preparation of each dish is what makes them different.

The color of the dish is a result of the spices used in it. The spices are usually turmeric, cumin, coriander, ginger, garlic, and chili. These spices are mixed with yogurt or cream to make a paste that is then added to the dish.

Therefore, another difference between tikka masala and butter chicken is sweetness, which is contributed both by the ghee, chili peppers, and heavy cream in the first recipe. Still, you can’t always taste it, but it makes a difference.

Tikka masala originated in Britain, but it has become popular in India as well. It is made with a tomato-based sauce, yogurt, and spices like cumin, coriander, ginger, garlic, and chili pepper.

Butter chicken originated in India. It is made with a tomato-based sauce and butter or ghee (clarified butter). The dish can be served with rice or naan bread.

This means that tikka masala is a much spicier dish than butter chicken, while you still use chili powder and butter in the butter chicken recipe. Still, this makes a difference between the two.

The difference in the presentation of both these dishes is what makes them so different on the palate, and this can be seen as a great example to explain how presentation influences taste.

The texture is the key difference between tikka masala and butter chicken. The former is a little dry and chunkier, while the latter has a smooth and creamy texture. The spices are different, but it’s the texture that makes them so different.

The tikka masala dish has a thicker sauce with creamier consistency and chunks of vegetables in it. The butter chicken is more watery with larger chunks of meat cooked in a tomato-based sauce.

The taste of food is a subjective experience, but in this case, it’s also a cultural one. Chicken tikka masala and butter chicken are very similar dishes, but they originate from two different cultures.

The difference between tikka masala and butter chicken can be seen in the ingredients used, their tastes, and how they’re cooked.

Is Butter Chicken The Same As Tikka Masala? 3 Similarities 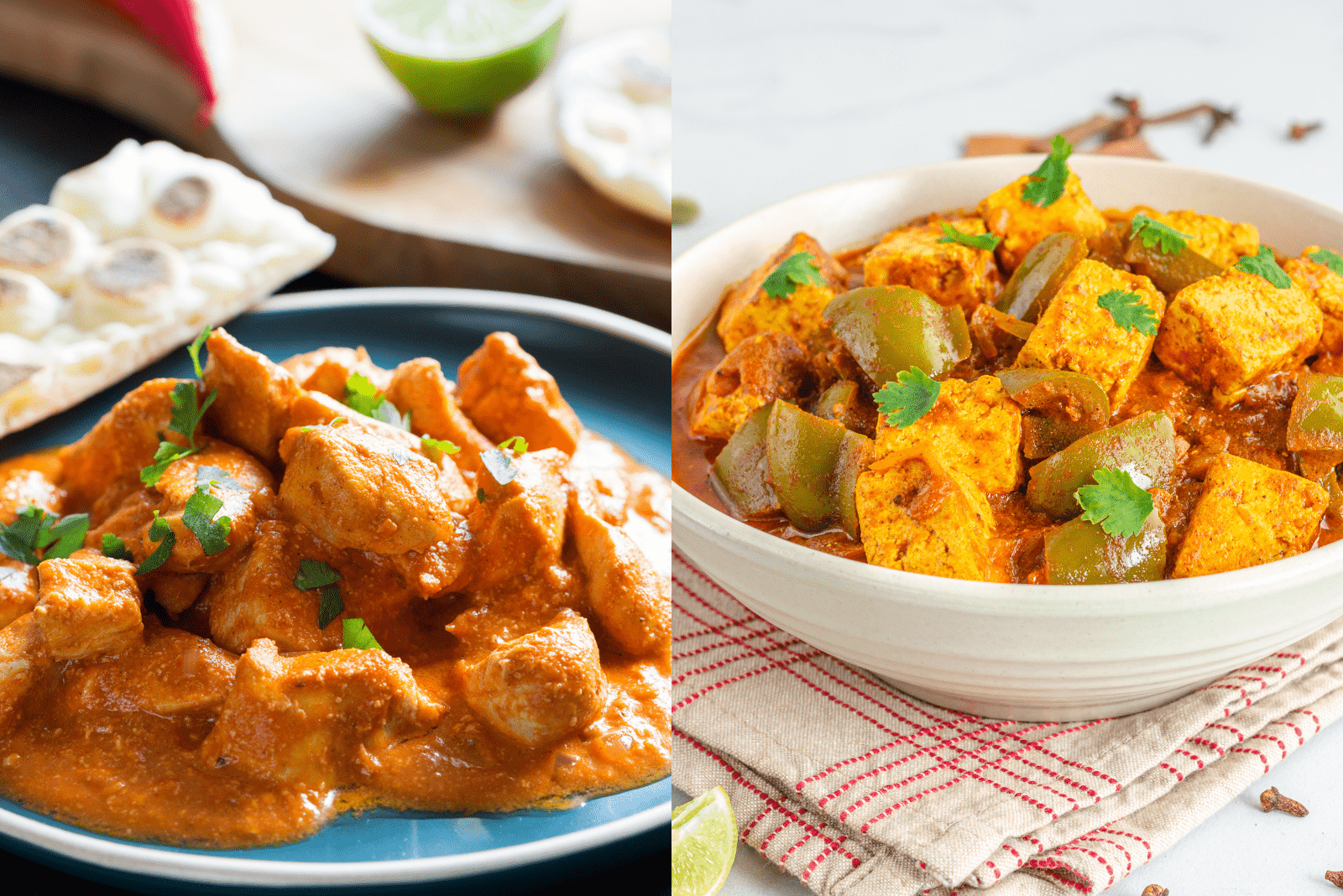 But, while they are different, they still have the same origins, caloric value, and main ingredient. Here are a few similarities.

• Chicken: The similarity between tikka masala and butter chicken can be seen in the ingredients used to make both dishes. They both have chicken meat as their base, using marinated chicken thighs, chicken chunks, or breasts.

• Health: The two dishes are very similar because they both consist of chunks of meat cooked in a tomato sauce with different spices. However, tikka masala does not have butter, whereas butter chicken does, still making them both extra healthy.

• Origin: Both the butter chicken and tikka masala recipes originate in Indian cooking. While one was first made in Glasgow and the other in Northern India, they both rely on Indian cuisine in Britain and the US.

So, to the question: Is tikka masala butter chicken? You can definitely say no. Still, both recipes have some of the same characteristics.

You can see the difference between a creamy and sweet butter chicken and a spicy and tomato-rich chicken tikka masala. That’s what I enjoy in both cases. I hope you do, too, because both recipes are delicious and worth trying.

Who doesn’t like chicken thighs in a tasty butter or curry sauce? I know I love it. This is what sets these two dishes apart from all the rest and why they’re so popular.

I hope my article helped you understand where the differences and similarities between these two dishes lie.

Now you know what your favorite is in the butter chicken vs tikka masala battle. Remember, one is classic British food, and the other is the food of India.