If you are a really big fan of spicy food and hot dishes, then you might have heard of scotch bonnet pepper. The reason for this is that this type of pepper is commonly sold and it is a little difficult to find it in the grocery store.

So, if you plan to catch your friends on the wrong foot with a hot surprise, or maybe one of your family members likes to punish their palate with tons of Scoville, there is little better than scotch bonnet pepper.

But, as I already said, it is a real miracle to find it in the supermarket. Unless you are somewhere in the Caribbean or Jamaica. But, if you are not, you are in the right place after all. Together, we will find the best substitute for scotch bonnet pepper.

You’ll be surprised to note that there are a very large number of fantastic alternatives which, in addition to being different according to their level on the Scoville scale, also have countless characteristics that make them unique.

Get To Know Scotch Bonnet Pepper

So, lets first say a few words about our scotch bonnet pepper. It is, by no means, one of the hottest peppers of all.

On average, it measures around 100,000 to 300,000 Scoville Heat Units on the Heat Scale. It has a red or yellow color at maturity. But, interestingly, it can also develop a chocolate brown shade.

It possesses a bright, fruity flavor with some sweet undertones. There are also some hints of tomato, apple, and cherry.

This pepper originates from the Caribbean, and it is necessarily used in some well-known dishes such as Jamaican Hot Pepper Sauce and Jerk Chicken.

Besides the Caribbean, it also appears in the Maldives and Guyana. So, let’s finally begin with our first hottie. 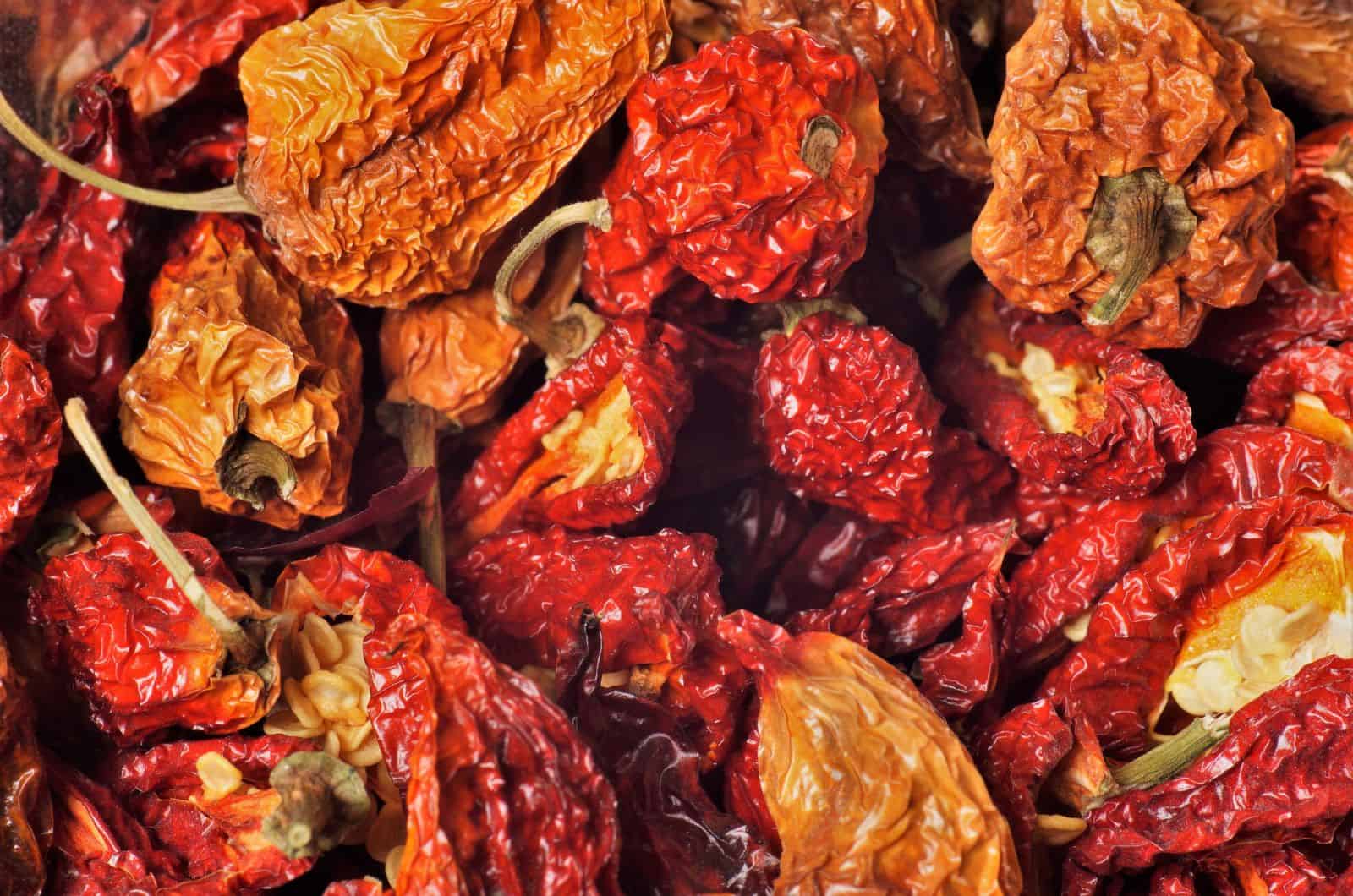 By the level of heat, there is none equal to super hot habanero pepper. There aren’t many alternatives that meet this requirement to the same extent.

Although similar in terms of heat level, there are quite big differences in terms of flavor between them, since habanero doesn’t have that fruity flavor as scotch bonnet does.

I also have to mention that habanero has some health benefits, since it contains a vast amount of Vitamin C, and it is full of antioxidants which are great for your immune system and overall health.

2. Our All Favorite Chili Powder

When someone mentions chili powder, most of us think of the chili pepper mixture first. That is the false connection because actually chili powder is a blend of several spices.

Cayenne pepper, cumin, garlic, paprika, and oregano are some of them. Cayenne pepper is most important because the level of heat of chili powder depends on the amount of it.

Chili powders can vary from mild chili to hot chili.

All in all, chili powder, especially the hot version, can be a great substitute for scotch bonnet pepper, enriching the dish with the mix of flavors of the spices from which it is composed.

This serrano pepper is a cultivar of the species capsicum annum. At first sight, serrano pepper looks exactly the same as the more popular jalapeno pepper, because it is similar in color, but it is a bit smaller in size.

Scoville Heat Units range from 10,000 to 23,000 SHU. When we compare that to the Scoville heat units of scotch bonnet peppers, we can see that it is barely 10% of its value.

So, if we want to use serrano peppers as an alternative to scotch bonnet peppers, we will have to sacrifice the level of the desired spiciness to a large extent.

The advantage of this type of pepper is that it is very easy to get, much easier than scotch bonnet pepper.

4. Rocotillo Pepper: Tasty And Hot, But Hard To Find 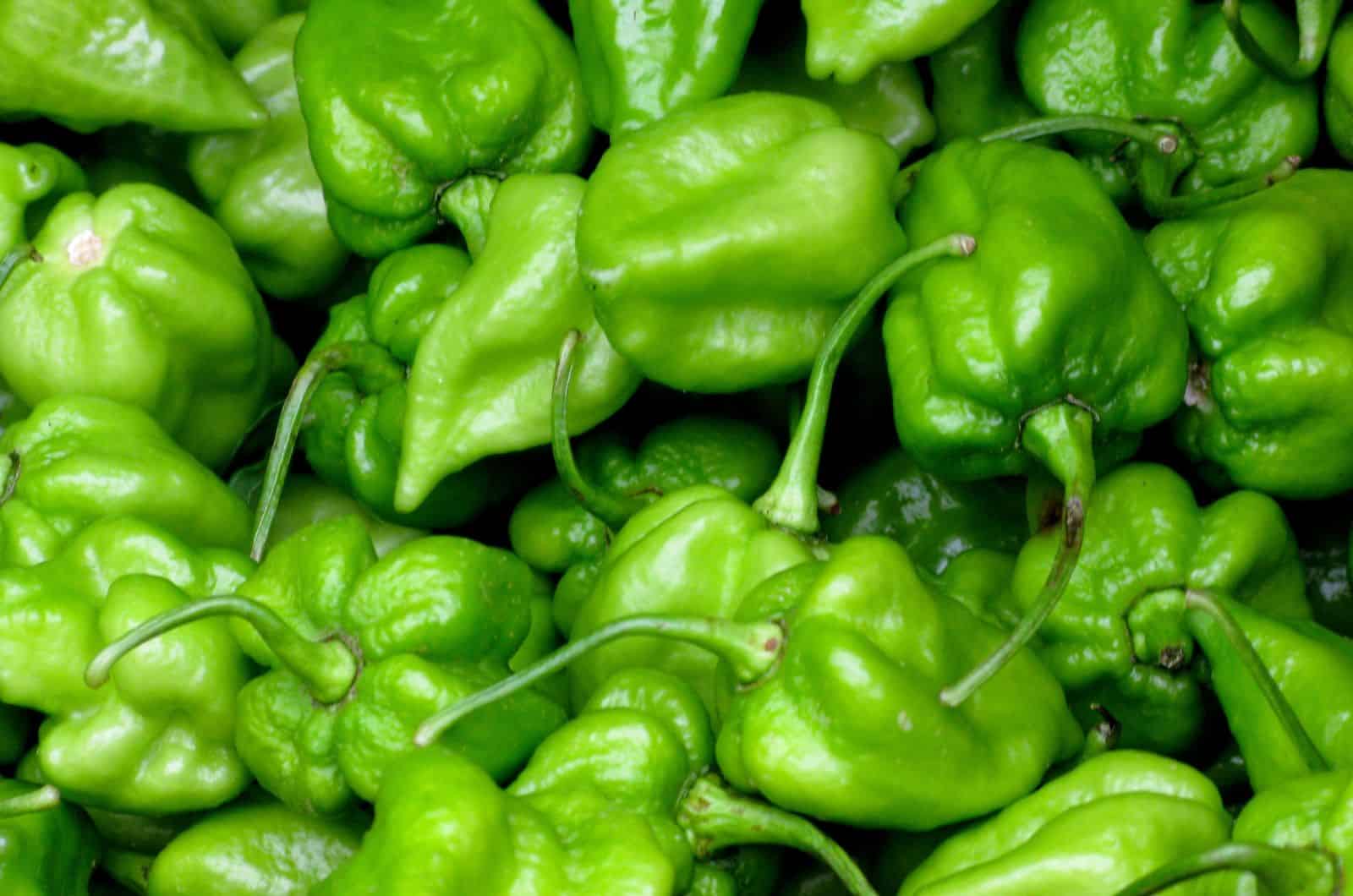 This type of pepper has a similar shape to scotch bonnet pepper. The thing is that it is way lower in heat, with the range on the Scoville scale of about 1500 to 2500 Scoville heat units.

It has a bit more sweetness and less fruitiness, and it is a good reason to be considered as a great substitute for scotch bonnet pepper.

The biggest disadvantage of rocotillo pepper is the fact that it is somewhat harder to find compared to alternative options.

A good substitute for scotch bonnet pepper due to similarities in flavors and heat levels.

Cayenne peppers come in a few different colors, and those are green, orange, yellow, and red.

So, if your goal is a very intense taste and flavor of food, red cayenne pepper is a great choice and a great alternative to scotch bonnet pepper.

This type of paste is actually a mix of red chilies and so-called Thai spices. Thai represents a philosophy of cooking, where the main goal is to achieve a balance of the four essential tastes: sour, salty, spicy, and sweet.

Seafood extracts that Thai Red Chili paste contain could be a big problem. This is important for people who suffer from seafood allergies, so it doesn’t hurt to know.

7. Sriracha: A Good Fit For Almost Any Dish

Sriracha is a sauce that is recognized all over the world. This sauce originates from a town in Thailand called Si Racha, after which it got its name.

Thai characteristics of this hot sauce makes it extremely versatile, so it also makes a very good substitute for scotch bonnet pepper.

Sugar, garlic, vinegar, chili peppers, and salt are the most important ingredients that make this sauce what it is. The listed ingredients alone tell us what a rich flavor profile this sauce has. 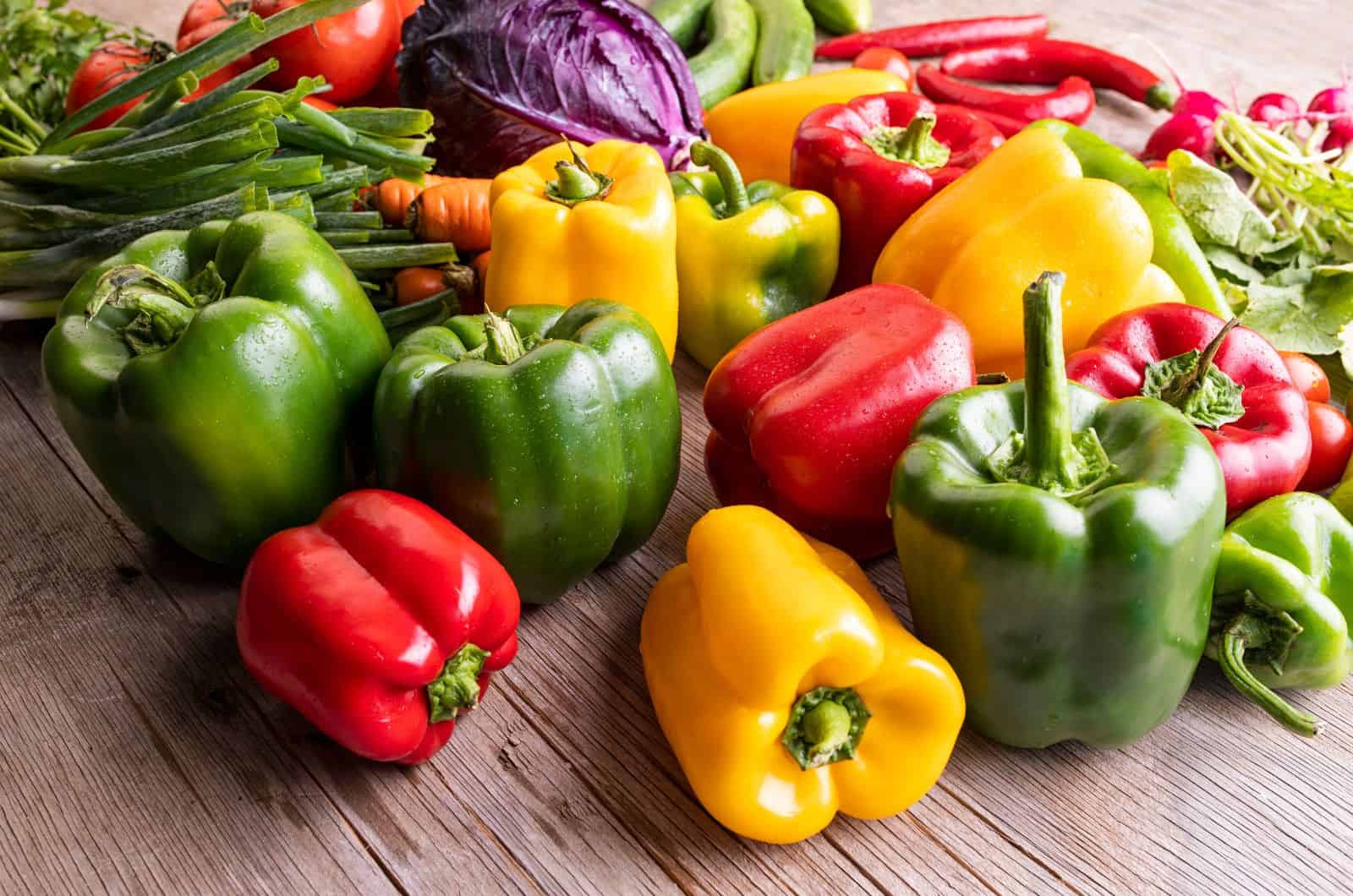 Paprika has a mild and sweet flavor, so it’s ideal substitute for scotch bonnet pepper, but in dishes where spiciness is not very important to you.

It is important to add that paprika, just like some other types of peppers, has certain health benefits, like antioxidant and anti-inflammatory properties. The reason for that is the high amount of vitamin C and vitamin A.

Definitely one of the most recognizable foods in general, and especially among hardcore fans of hot and spicy food, tabasco sauce is one of the hottest alternatives of all.

A great substitute for scotch bonnet pepper in your hottest dish. Is a treat for all of you who like to work up a sweat while eating your favorite dish.

Tabasco sauce is made from salt, vinegar, and tabasco chili pepper.

So, if you want to make a dish that cannot be imagined without scotch bonnet pepper, but maybe you don’t fancy the spiciness that much, jalapeno is the ideal solution.

We will now also mention a few details about jalapeno, considering its reputation in the hot and spicy world. Jalapeno originates from Mexico, but now it has spread all over the world and is been widely used in a wide array of world cuisines.

As we said before, this Mexican hottie is a mild type of pepper, ranging from 2500 to 8000 Scoville Heat Units on the Scoville scale. This makes it acceptable to a wider population, or perhaps to people who don’t like very hot food but like to spice up their favorite dish a bit.

Much like jalapeno, Fresno peppers are considered a mild type of pepper, only a little spicier. They occupy a similar place on the Scoville scale, with values that range from 2500 to 10000 Scoville Heat Units. 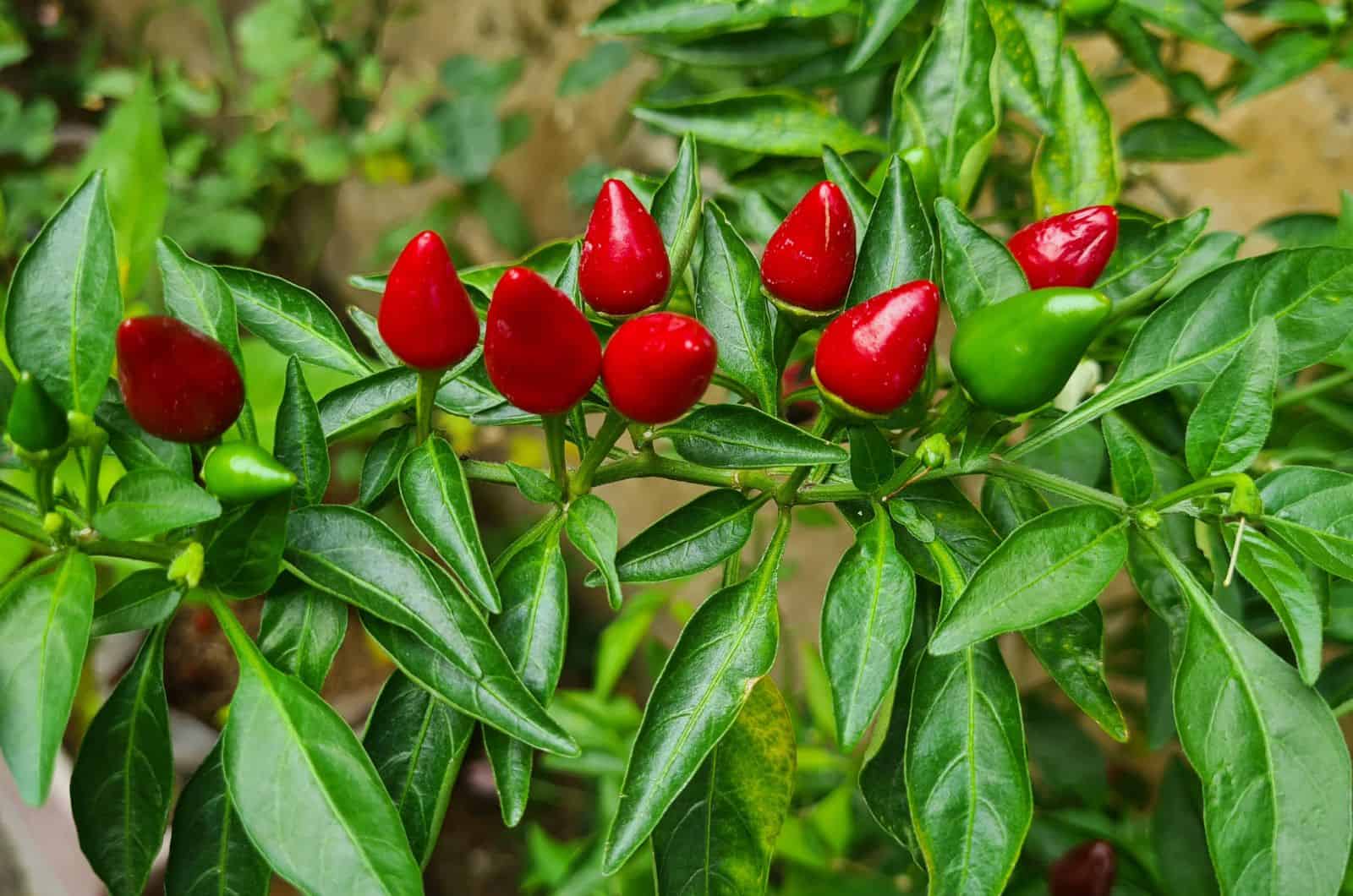 This type of pepper originates from South America and is popular in Chile, Argentina, China, and Mexico. The pequin pepper ranges from 30,000 to 60,000 Scoville Heat Units, which represents a solid level of heat.

Pequin peppers have a unique combination of fruitiness and heat, which is what makes them special.

They are most often used in dishes such as stews, salsas, sauces, and hot sauces.

Piri piri originates from Portugal. Why Portuguese traveler? Well, because Portuguese traders brought spices to their home country, and made the famous piri piri sauce, which is most often used in the preparation of Portuguese chicken.

The main ingredients of this incredible sauce are vinegar, garlic, bay, oil, and lemon. This sauce is medium hot, so it can suit the palate of the vast majority of spicy food lovers.

What Are The Ingredients In Scotch Bonnet Peppers Sauce?

When it comes to ingredients, there are many good recipes for scotch bonnet pepper sauce, but I will share with you my personal favorites.

This sauce is best used as marinades for fish and chicken. It can be also used in stews and soups.

Can You Use Green Or Red Bell Pepper Instead Of The Scotch Bonnet? 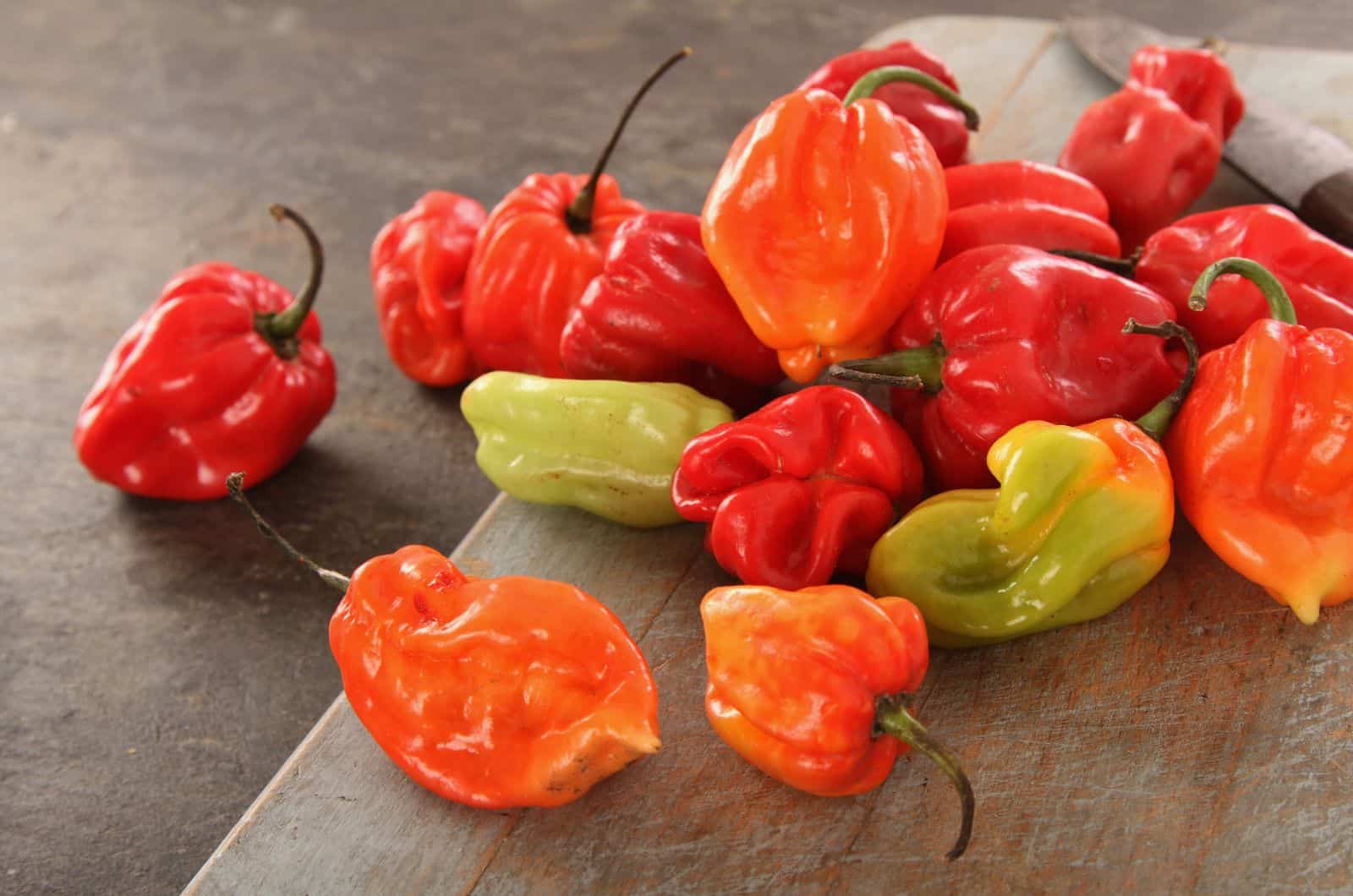 The only difference between these two is that the red version is somewhat sweeter, and the green one is more bitter because it is less mature.

All in all, if you desire a mild alternative to scotch bonnet pepper, green or red bell peppers would be a good choice.

And The Final Thoughts

In short, we can conclude that there are a large number of very good scotch bonnet pepper alternatives. Of course, nothing can perfectly replace the original, but every one of these listed foods represents a quite solid substitute for scotch bonnet pepper.