I assume that most of you love to eat meat unless you are vegan or vegetarian. Meat is very nutritious and also very delicious when prepared the right way. And it is the main part of so many delicious dishes as well.

So, it is not a surprise that most of us are always trying to find a solution to how to store it properly and preserve its quality, most often when we get it from the grocery store.

One of the most common ways to do that is by freezing the meat in some kind of plastic bag or container, whether you are freezing chicken, chicken breast, ground meat like ground beef, poultry, or any other type of meat to make all kinds of dishes including stews, soups, meat, and veggie dishes.

There are numerous articles written on this topic. But, there is one more important question about refreezing meat. In this particular case the question of whether you can refreeze meat thawed at room temperature. The answer is partially positive but there is a lot more to say on this topic in order to understand it fully.

So, stay with me to find out the most important pieces of information related to this topic.

Can You Refreeze Meat Thawed At Room Temperature?

So, as I already said, the answer to the question of whether you can refreeze meat thawed at room temperature is partially positive.

But what exactly does that mean? Well, that means that, in one case, meat thawed at room temperature can be refrozen, but in another, it cannot.

More precisely, meat defrosted at room temperature for no more than 2 hours can be frozen again. But, in the case where you left your piece of meat defrosting on the kitchen counter for more than that time, it is not a good idea to freeze it again.

The reason for this is not very simple but, after reading this article, it will all become much more clear to you.

I will begin with some general information on freezing meat in order for you to understand, so stay tuned.

Why Do You Freeze Meat Anyway?

There are a lot of reasons why people freeze meat, but the most obvious one is to save some leftover food and to extend the initial shelf life of meat. The low temperature is the main “cause” of these benefits that freezing provides.

When meat stays at a higher temperature for longer times, the risk of bacterial growth is much higher and you all know what harmful bacteria can cause. It can lead to foodborne illness that can seriously deteriorate your overall health because of food poisoning.

When it comes to freezing, USDA guidelines suggest that the freezer’s internal temperature must be lower than -18 degrees Fahrenheit (below the temperature danger zone) in order to stop bacteria growth.

When the meat is frozen, its water content expands and ice crystals start to form, i.e. the water starts freezing, and that is not really good for the texture.

But you always have to lose something in order to get something. Here, you get a slightly different texture, i.e. the loss of quality, but at the same time, you get the frozen bacteria which then cannot cause the meat spoilage.

I am sure that, after noting this information, you have got some kind of picture of defrosted meat at room temperature.

Why You Should Not Thaw Meat At Room Temperature 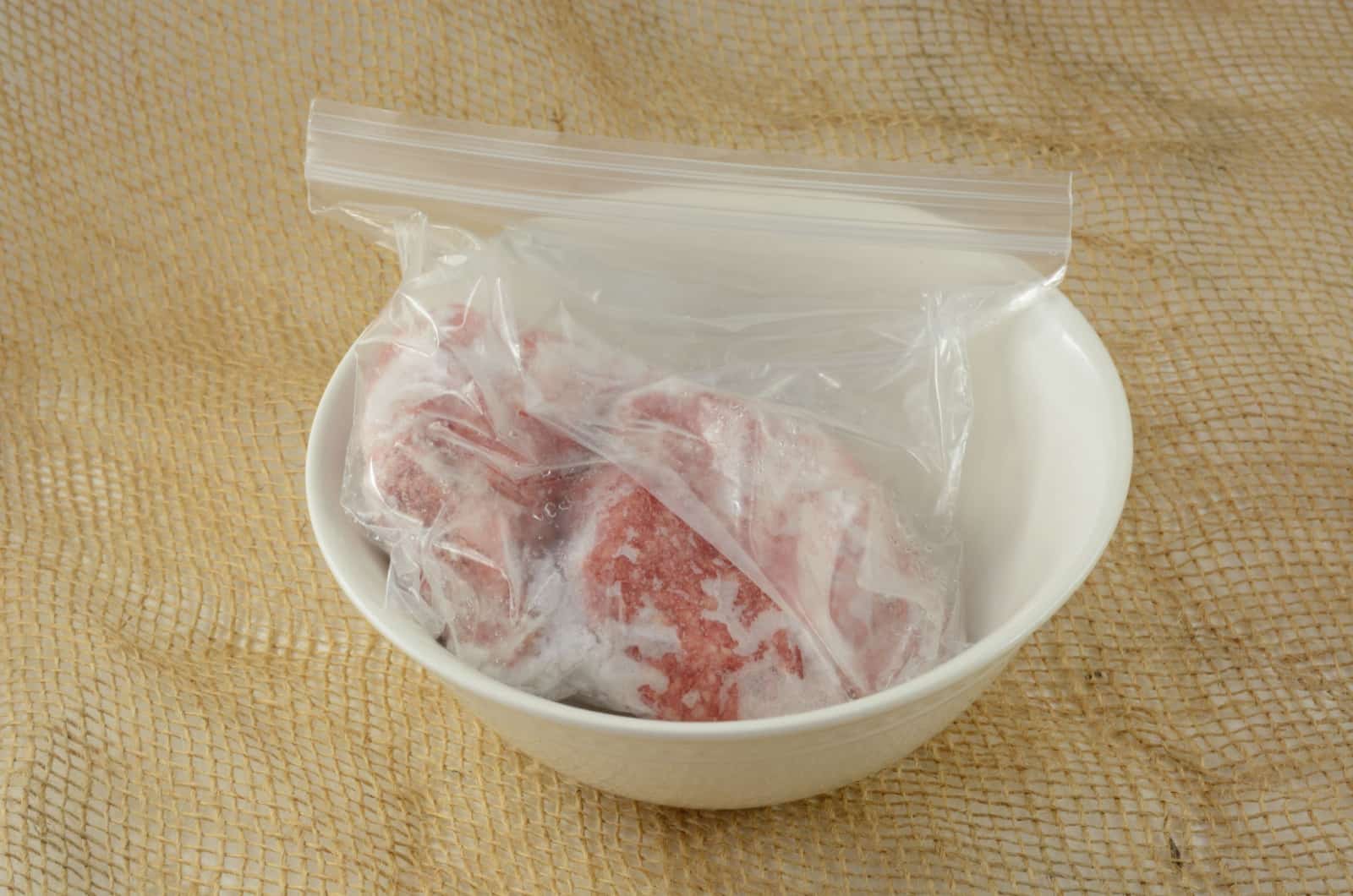 The main reason for this is harmful bacteria. As I already said, harmful bacteria can lead to spoiled meat that can be harmful to your health causing some types of diseases like E. coli.

When you pull out your frozen meat (or any other frozen food) from the freezer, it still possesses that bacteria in it.

Unfortunately, they are not dead but just incapacitated for a while. And when they finally get to a higher temperature, they start to multiply rapidly. This is because room temperature is within the danger zone ( 40-140 degrees F).

So, I am sure that most of you now understand why it is not a good idea to let any type of meat thaw at room temperature. It will cause spoiling due to the harmful bacteria that can really damage your overall health.

What You Should Know About Refreezing Meat Thawed At Room Temperature 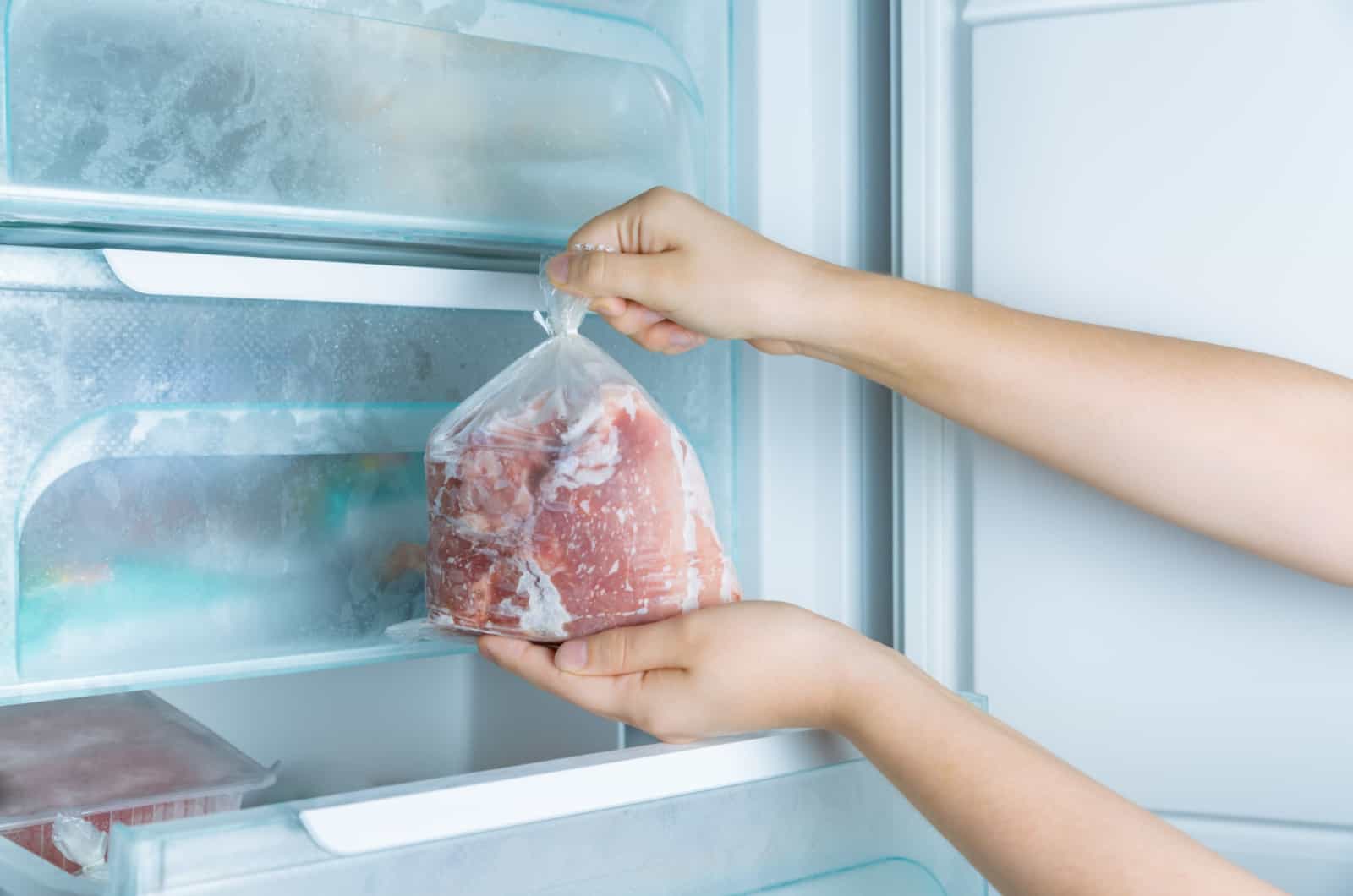 But, as I already said earlier, the time frame of 2 hours is considered acceptable in terms of food safety, but I would certainly suggest that you avoid refreezing meat that has been defrosted at room temperature.

The main reason is definitely the bacteria that, when it is reactivated, starts reproducing even more rapidly.

There is also the shelf life of the meat that is decreased when the meat is thawed at room temperature and then frozen again.

And there is also the problem with so-called water molecules in the meat that are expanded twice, which is not good since that leads to decreased quality in meat texture. That phenomenon is called freezer burn.

So, as you can see, even within this two hours frame, refreezing meat that has been thawed at room temperature is not a very good idea.

But, if you really do not have any other option but to let your meat room temperature defrost, you can cook it and then put it in the freezer. It is a much safer way to do the thing because cooked food in general is much safer to freeze or refreeze.

What Is The Best Way To Refreeze Thawed Meat?

The best way for thawing food, in general, is to thaw it in the fridge. Meat is not an exception when it comes to this.

The main reason for this lies in the fact that the internal temperature of the refrigerator is somewhat higher than that of the freezer but it is still below that temperature danger zone that ranges from 40 degrees F to 140 degrees F.

But, what exactly does that mean?

Well, it means that the meat, when put in the refrigerator, will slowly begin to thaw because of the slightly higher temperature, but the bacteria that lie frozen in meat won’t be able to multiply because that is still not their optimal environment.

And there is also the preserved quality of the meat which is also very important. When you thaw meat slowly, the ice crystals are untouched, and that means that the texture is untouched as well.

Besides texture, the flavor is also preserved because the so-called flavor molecules are not released as rapidly as they would be if the meat is thawed at room temperature.

Can You Refreeze Raw Meat Thawed In The Microwave? 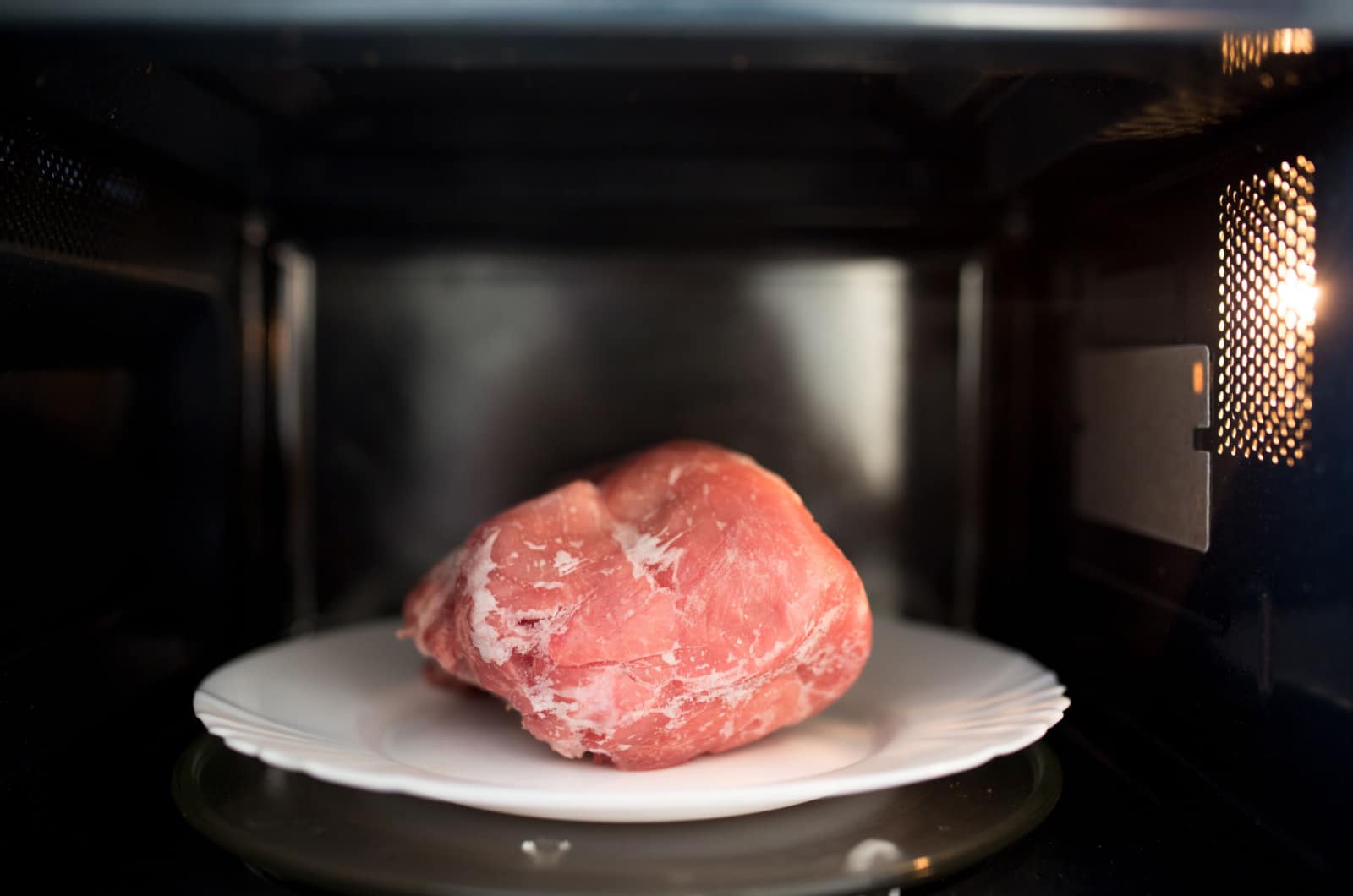 Although it is not recommended, it is still possible to refreeze raw meat that has been thawed in the microwave and some people do that regularly. You have to know the procedure in order to go through it properly and do the thing right.

You’ll first have to get a clean plate or dish because hygiene is most important after all. Then you can put your meat on it. When you put that dish with the meat on it into the microwave, you’ll have to cook it for 2 minutes at high power.

After those 2 minutes, let it stand for 1 minute. And, after that, you must check to see if your meat is defrosted. If it is not, you can continue the process for an additional 2 minutes.

If the meat has not thawed even after that, then you should consider removing it from the microwave and putting it into cold water to start the thawing process again.

So, as you have seen from this interesting article and these cooking tips, the answer to the question of whether you can refreeze meat thawed at room temperature is not easy at all. Theoretically speaking, the answer is positive.

Obviously, there are much more cons than pros, so it is not worth the risk. It is easier to make an effort and not leave the meat at room temperature, but to defrost it in a different way, for example, using the refrigerator, which is also the best option.

[…] chops are a type of meat that is cut from the rib or loin of a lamb. They are usually roasted, grilled, or […]